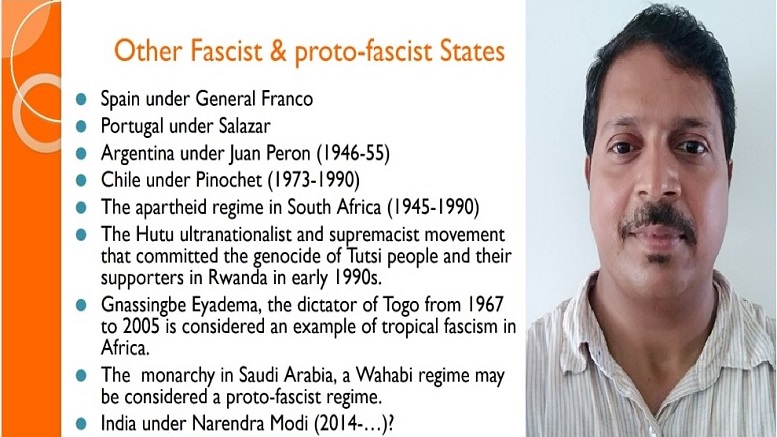 A Christian professor Dr. Gilbert Sebastian from the Central University of Kerala bad mouths Sangh organizations, Narendra Modi, and the BJP government during online zoom classes and teaches his students that the RSS is a proto-fascist organization and compares its members to German Nazis.

He has been let off the hook with a mere suspension pending inquiry, with many fearing he will be reinstated as soon as public sentiment settles. Already, a Communist MP from Kerala has written to the Union Education Minister to revoke Sebastian’s suspension.

A three-member internal committee of the University looked into the allegations of misconduct against the faculty member, Dr. Gilbert Sebastian. They found that Sebastian was spreading hatred against the Rashtriya Swayamsevak Sangh (RSS) and the BJP by referring to them as ‘proto-fascist organizations’ and motivating his students to start a violent rebellion against the Modi government. The university Vice-chancellor H. Venkateshwarlu has now suspended Gilbert, pending an inquiry.

Proto-fascism is nothing but a forerunner for fascism. This is how Sebastian has grouped BJP-ruled Bharat with dictatorial states like genocidal Hutu regime of Rwanda, the Apartheid-era White supremacist regime of South Africa, Saudi Arabian Wahhabi monarchy etc.

He claimed that the BJP is only just a  political front of the RSS which will soon abolish the BJP and announce that henceforth there will be no elections in Bharat! “They might do that. I am serious. They might do that,” he said. He said that as autonomous bodies under RSS do the dirty work, even after ‘destroying democracy’, they can present themselves with a clean image.

The incident happened on 19th April during a one-hour lecture session on the ‘Theories and Concepts of Political Science’ paper. Gilbert teaches International relations and politics at the Central University of Kerala. Earlier, audio clips of the controversial online classes were leaked. It is believed that the students who attended the classes themselves uploaded the audio of the controversial lecture online.

Naturally, this did not go down well with lakhs who work selflessly for Sangh-affiliated organizations all over the state or the crores working for its nationalist cause all over Bharat and the world. Many were busy catering to various streams of social work as directed by organizations like the Sewa Bharathi, but still found time to express their displeasure at Gilbert’s rant, on social media.

Sebastian started by discreetly and falsely comparing the Nazi’s Hakenkreuz (hooked cross) with the holy Hindu-Dharmik Swastika symbol as if both were the same. He seemed adamant when he wanted to know (from his students) where else the Nazi symbol is used. The replies truly represent the status of post-graduate ‘studies’ in ‘liberal’ Kerala. One student it seems had seen the symbol in temples while another said that it represents Kali, a ‘black female goddess’!

His ‘lecture’ felt like a hate speech against Hindus, Swastika, Hindutva, RSS, BJP, and other Hindu organizations. He says that there’s a right-wing resurgence across the world. They were coming to power using ‘fake claims’ and lucrative promises by promising jobs, better income, and infrastructure.

His examples begin with the great depression of 1930, Benito Mussolini in Italy, and Adolf Hitler in Nazi Germany but ends with Bharat under Narendra Modi (2014-…..). The  BJP won the elections on the pretext of jobs and infrastructure but they have done nothing since they came into power, he concludes. ‘Educated’ southern Bharat states including Kerala, the Dalits, and the working class do not trust or support the BJP, he claimed. However, he added, the BJP’s political appeasement has now lured the Dalits into voting for them.

These comments drew the attention of Vinod Karuvarakundu, a member of the National Monitoring Committee on Education (SCs, STs, Persons with Special Needs and Minority Education) under the Ministry of Education who complained to the University VC.

Unlike usual political formations, fascism uses semi-autonomous civil society groups as militant outfits, Sebastian told his students. His examples included the Blackshirts in Italy, the Brown Shirts in Germany, and subtly compared them with the RSS uniform. Sebastian claimed that RSS was inspired by Adolf Hitler!

RSS is the mother of all Hindu parties in Bharat and BJP is its political outfit, he said. Vishwa Hindu Parishad (VHP) and Bajrang Dal are ‘militant groups’ of RSS entrusted with its ‘dirty work’. He alleged that the rich Hindu NRIs sponsor the VHP and Bajrang Dal to create unrest in the country! His own appeasement agenda and his Hinduphobia came forward when he blamed the Bajrang Dal for the 2002 riots in Gujarat.

Sidestepping predatory bishops like Franco Mulakkal and priests like Robin Vadakkumchery, Sebastian raged against Hindu poojas and ‘people from the North’ who he claimed are responsible for atrocities against women. He added that a documentary revealed that one of the accused in the Delhi Nirbhaya case used to do Pooja daily!

He added that Congress Party itself is the main opposition in Bharat.

Kerala Rajya Sabha MP Binoy Viswam from CPI (Communist Party of India) has written to the Union education minister Ramesh Pokhriyal to revoke Sebastian’s suspension and ensure that no ‘coercive action’ is initiated against him! For the communists, anything anti-Hindu is good enough.

CPI MP from Kerala Binoy Viswam wrote to Union Education Minister Ramesh Pokhriyal urging him to 'revoke the suspension of Dr Gilbert Sebastian and ensure that no coercive action is taking against him' pic.twitter.com/Vuab152rHi

Unhappy with just a ‘suspension’, local BJP and Sangh Parivar activists ask, now what? They feel that left unattended the whole incident might die a slow death. The professor might be reinstated sooner rather than later and continue to use the same toolkit propaganda. Their protests have at least led to many ‘neutrals’ agreeing that the morality and legality behind such lectures should be debated and corrected immediately.

As for morality, Modi-RSS bashing and Gaumutra jibes are a part and parcel of many beef-eating Christian, Communist and Muslim cultures in Kerala. But then the online class was not the Professor’s choir group. Freedom of speech has no limits when it comes to dehumanizing Hindus, but has very narrow boundaries when it’s about the religious matters of the Church/ Mosque goers?

From a legal point of view, a government employee criticizing his own government is misconduct as is bringing outside influence into service matters. But what is most dangerous is such a bigoted individual having access to indoctrinate and poison young minds.