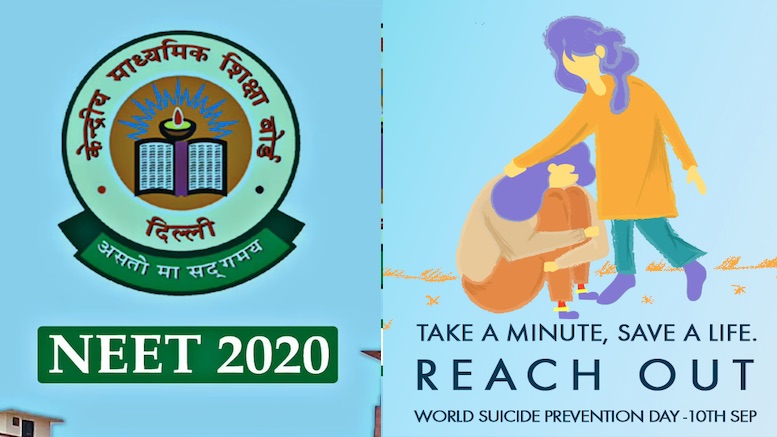 September is World Suicide Prevention Month. On September 10, 2020 (World Suicide Prevention Day)  as a suicide prevention and mental health activist, I was  invited to be a  panellist in a webinar on Building perspectives in suicide prevention, jointly organised by HCL Foundation and Happy Schooling, a HCL Foundation-supported initiative of MS Chellamuthu Trust and Research Foundation, Madurai,  to promote well being of students in 24  schools of  Madurai Corporation.

Just  four  days later, on September 14, 2020,  we  were shocked by the tragic suicides of four NEET (National Eligibility Entrance Test) candidates in Tamil Nadu. The candidates, two of whom had appeared for the NEET last year, ended their lives  just a day before the exam because of their apprehensions and fear of being unable to clear the exam despite a second attempt.

There was widespread distress among the public and a knee jerk response to blame NEET for the students’ suicides. Political parties across the spectrum in the state, unanimously declared that NEET was the cause of the student suicides, and therefore spearheaded the anti NEET rhetoric for a ban on the exam. In addition, they vied with one another to offer financial compensation to the families of the deceased. In doing so, suicide, a  serious preventable public  health  issue,  was obfuscated and reduced to a political tamasha  full of “sound and fury, signifying nothing.”

In this connection, the recent observation by Justice Kirubakaran of the Madras High Court requesting the media not to glorify student suicide  and cautioning  political parties  to desist from the practice of offering financial compensation to the families of the deceased is informed, sensitive and pragmatic.

Despite the anti-NEET rhetoric of the political parties in the state, the number of candidates appearing for NEET in Tamil Nadu has seen a steady increase over the years. This year, 16 lakh students across the country registered for the exam and on September 13, 2020, the centres reported 85 percent attendance. In Tamil Nadu, 1. 8 lakh students registered for the exam and the 228 NEET centres in the state reported 80 percent attendance.

The National Eligibility Entrance Test (NEET) was mandated by the Supreme Court in 2016 as a nation-wide, efficient, transparent, and internationally standardised test to ascertain the competence  of candidates aspiring for admission to  government  and private medical  and dental colleges in the country at the under graduate (NEET UG) and post graduate levels (NEET-PG).

DMK President MK Stalin, who attended the Monsoon session of the Tamil Nadu assembly with a mask that proclaimed “Ban NEET, save TN students,” has been vitriolic in his tirade against NEET and insists on its ban. Ironically, NEET was introduced in 2012  by the Dr. Manmohan Singh-led UPA Government, of which the DMK was a staunch ally. In an email interview to CNN News 18, the DMK president branded NEET as “the guillotine that has taken many lives.”

According to him, the abolition of entrance tests to professional colleges in 2007 by the then DMK government, enabled children from socio economically under privileged groups to realise their dreams of becoming doctors or engineers on the basis of their performance in their class 12 final examinations.

“NEET, an unnecessary eligibility test, has turned out to be a destroyer of such dreams, and has dismantled the social justice supporting the entry of students into government-run colleges in Tamil Nadu,” says Stalin, who claims that NEET is yet another misguided scheme of the Narendra Modi government. Terming it as a “kill and loot scheme,” he also alleged that NEET has spawned an industry of coaching centres, which charge exorbitant fees, and is also associated with rampant examination  malpractice in NEET centres.

Before the introduction of NEET, a private medical college in Tamil Nadu had to allocate 15 percent of its seats to the All India Quota  (AIQ). Of the remaining 85 percent, 42.5 percent of seats were reserved for candidates selected by  the state based on their  merit.  The other 42.5 percent was treated as management quota  and seats were allotted based on performance in the test conducted by the respective colleges.

However, the  tests were shaky in terms  of their credibility and thus were a mere eye wash. For instance, 63 percent of seats  in a private medical college that offered 150 seats, were filled up based on capitation fee as high as Rs 1 crore for every seat! However, after the Supreme Court NEET mandate, 15 percent of seats in private medical colleges in the state are being filled on the basis of the AIQ and the remaining 85 percent on the basis of NEET scores and the 69 percent reservation formula in the state!

The  reality of  the revised arithmetic  has enormous implications in the demonisation and politicisation of NEET  in the state. It is also interesting to note that while most states have  revised the state syllabus to align as closely as possible with the NEET curriculum, the state syllabus for Class 12 followed in  Tamil Nadu  does not reflect any such revision.

In addition to political parties, celebrities have also jumped into the ban NEET bandwagon. For instance, well known Kollywood actor Surya, whose Agaram Foundation, supports the education of  rural children from  socio economically disadvantaged communities in the state, lashed out against NEET in the wake of  the student suicides.  He branded it as a “manuneethi”  (justice based on Manu’s laws) exam that excludes and disadvantages the medical college aspirations of students from marginalised communities.

Nevertheless, despite the political brouhaha over NEET in the state, the stark reality is that student suicides in  the country have seen a dramatic increase in the last three years. There are several risk factors such as academic stress, peer pressure, unemployment, family problems and relationship issues that propel students to take this extreme step. According to  data from the Ministry of  Human Resource Development, Maharashtra accounted for the maximum number of student suicides in the country (4235) from 2016-2018, followed by Tamil Nadu (2744).

S. Gurumurthy, political analyst and commentator is unequivocal about the fake narrative over the NEET suicides in the state that is driven by hidden political agenda. “Suicide because of exams and exam results is a common problem. It  is  unfortunate that the campaign and debate are going on as if suicide in Tamil Nadu started only because of NEET. NEET kills only a few. Other exams kill hundreds. Why not  ban all exams?”  he asks.

The  media went ballistic about highlighting the  suicides of the four NEET aspirants  in Tamil Nadu. Painful details of the methods used by the students to end their lives,  the contents of their communication  to their parents and videos of their  farewell messages were splashed in the media. The insensitivity, sensationalism and lack of responsible reporting was as  distressing as the tragedy.

According to the Lancet, suicide rates in Bharat are the highest in the 15-19 year-old age group across the world.

As a suicide prevention and mental health activist  I  can assert  with considerable certainty that the crux of the suicides of the NEET  candidates  is not NEET but unrealistic parental pressures and aspirations  and inability to face life challenges resiliently. Unfortunately, our classrooms have become centres for dissemination of information to get the required marks to stay ahead  in the rat race.  With the excessive focus on academics, we fail to also impart life skills such as resilience and values that would enable students to live life purposefully and meaningfully.

A suicide is a cry for help. According to the American Association of Suicidology, “The primary goal of suicide is not to end life; but to  end pain.” A suicide is often a  symptom of an underlying mental health condition. Suicides are treatable, preventable and curable, provided  appropriate interventions (pharmaco therapy, counselling and psychotherapy)  are initiated early. However, ignorance, lack of awareness and  stigma delay or prevent health seeking behaviour.

Suicide is a preventable public health issue. However, there is no one reason or cause for suicide. Rather, suicide is a complex and complicated issue that is multifactorial or results from a convergence of several risk  factors. Simultaneously the presence of protective factor such as family support  are a deterrent. That is why it is important to  undertake a psychological autopsy  after a death  by suicide to understand the various push and pull factors that could have led to this tragic  death. Such an undertaking  has important implications for preventing suicides.

It is important that we neither glorify nor  condemn suicides. People who die of suicides are neither heroes; nor are they  zeroes. They were people in intense psychological pain and  suicide was their way of ending their pain. We need sensitivity not sensationalism and glorification in responding to suicide.  We need to normalise conversations on suicide and create spaces and avenues for people to seek help. We need to normalise help seeking behaviours for people who are psychologically vulnerable. We need stigma-free conversations on suicide that create safe, supportive spaces to address this complex and complicated issue.

Dr. Nandini Murali is a suicide prevention and mental health activist, and Director, SPEAK, an initiative of MS Chellamuthu Trust and Research Foundation, Madurai, to change conversations on suicide and promote mental health. Her book, Left Behind: Surviving suicide loss, is to be be published shortly.