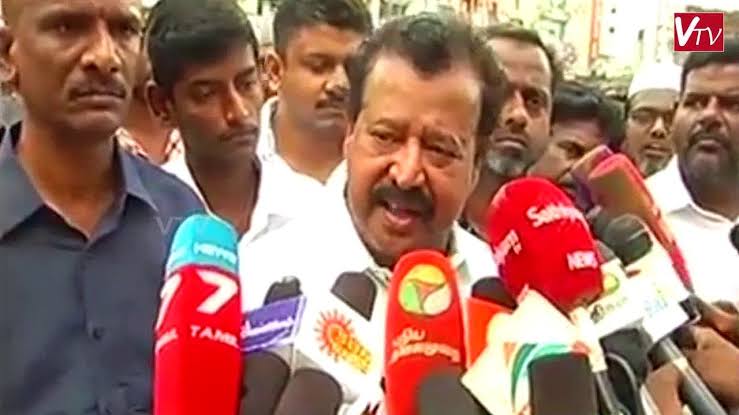 Even though it is not even a month since DMK came to power, they have already started targeting education, the first priority of Nehruvian ‘Idea of India’ and Dravidian ideologues. K .Ponmudi, Minister of Higher Education, has alleged that the books published by Tamil Nadu Open University, which offers distance higher education, contain ‘prejudiced’ content. He told the media that the government will form a committee to review and update all the textbooks used by the university and that a probe will be initiated against the Heads of the Department and Vice Chancellor who allowed this.

The minister claimed that the political science book published for the first year students of MA Political Science contains ‘wrong information’ about DMK and Communist parties. He read out some lines allegedly contained in the book in a press meet: “Indian parties, parties such as DMK and communists who are against religions, are converting them (Muslims) into a vote bank. They prevent them (Muslims) from joining the national stream. They blindly appease minorities. They do not condemn when Muslims cause riots.”

This opened a floodgate of allegations about how RSS ‘infiltrated and corrupted’ the educational sector to further its ideology in the past ten years while AIADMK was in power. A ‘journalist’ who has been spotted with DMK IT cell personnel in the past, tweeted the page the minister read out in front of the media alleging that the book is ‘imbibed with Shakha thoughts and nefarious ideas’.

He also tweeted other pages as part of the same twitter thread, and translation of the same follows.

It further talks about how both central and state governments indulge in appeasing Muslims and cites an example of UPA appointing many biased governors who were from minority communities, and that such policies of appeasement ‘kindle hatred in Hindus’. It also talks about organisations and political parties that were formed, or work, based on religion. It cites Hindu Munnani, Shiv Sena, Muslim League, Christian Democratic Front, etc as examples of parties that ‘incite communal riots’.

The book touches upon the topic of how some Indian Muslims think Pakistan as their own country and hate Bharat. It explains how every small incident is blown up by the media and the government of Pakistan to incite Indian Muslims who play right into their hands. It accuses the Islamists with fundamentalist attitude of unleashing violence at every small opportunity.

Surprisingly, for a book published by a university in Tamil Nadu, it says how parties like DMK and Communists blindly support Muslims and do not even condemn when they riot. It also points out how such parties are quick to condemn Hindus when they retaliate in self-defense.

However, as per the minister’s own words, the book was published in 2005 by the Social Science Department of the University. DMK came back to power in the 2006 state election and ruled till 2011 with Karunanidhi at the helm. So the question arises as to why they allowed this book to continue, if they are today finding its content ‘prejudiced’?

Disregarding this simple fact, so-called journalists and DMK and DK supporters have been spreading canards that with the help of AIADMK, RSS is spreading its ‘venomous Nazi ideology’. The journalist who tweeted the pages of the book went on to say that there is a possibility of TN becoming Uttar Pradesh 2.0 unless all such ‘works of RSS’ are identified and undone. Just goes to show the deep-rooted hate for the North, and especially Hindi-speaking states, in EVR worshippers who constitute the DMK rank and file.

So what about the content of the book? And did the DMK minister and his followers cherry pick parts of it to strengthen their narrative?

While the parts about how Muslims refuse to mingle and how they should stop looking upto Mughals and Arabs as their role models in order to join the national stream are highlighted by DMK and DK supporters, the parts about how religious conversion, especially the Christian missionaries’ fanatic conversion activities are an attempt to show their strength in politics, are totally left out for some reason.

Were only the passages that talk about Muslims highlighted to whip up their emotions and do exactly what the book accuses DMK of doing, converting them into a captive vote bank? Christians are anyway lock, stock and barrel in the DMK camp, many would even say they hold the ideological reins of the Dravidian movement.

The book also details how ‘Babri Masjid was brought down by karsevaks’ and how communal clashes erupted all over the country after that. It also says that both Hindus and Muslims were equally affected in Godhra violence, and that ‘Hindu- Muslim unity is shattered because of conversions’ – both very true statements, but totally unpalatable for an EVR worshipper or any self-proclaimed ‘secular’.

So we can conclude that while the book’s curriculum could probably do with some finesse and more abstract presentation of ideas, it presents a largely correct and balanced perspective. Especially considering how NCERT and Samacheer Kalvi (TN school curriculum) by and large leave out the achievements of Hindu civilization, whitewash what Hindus went through at the hands of invaders and colonizers, and paint a misleading picture of current society and the problems ailing us.

The warp speed at which DMK has begun the work of injecting their ideology into educational curriculum is perhaps a lesson to learn for nationalist parties that haven’t made much progress even after 7 years at the center when it comes to correcting the distorted Marxist version of history peddled in NCERT books.