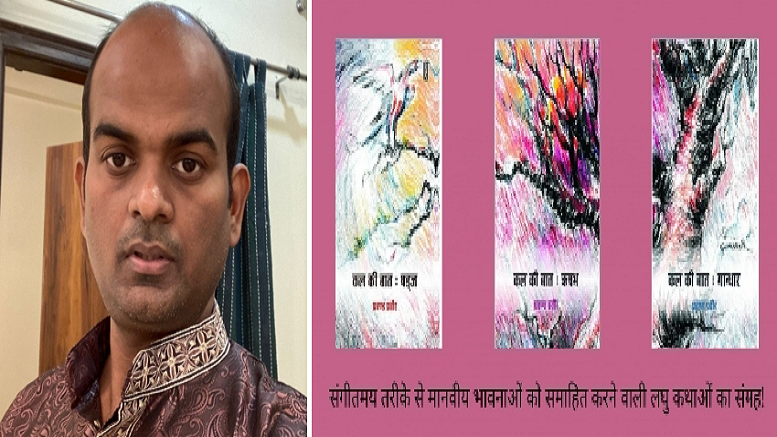 Academia has negatively impacted contemporary Hindi literature, as there is no longer a discourse on universal and timeless issues such as empathy, moral dilemma, metaphysics, poetic merits, horror, humour, children, lingual confusion, says Prachand Praveer, a prominent New Age author whose works have inspired many young and aspiring writers and who has just published a three-volume magnum opus titled “Kal Ki Baat”, which he describes as “a cry in a hypocritical world”.

“I believe contemporary Hindi literature has been negatively impacted by the Hindi academia. The responsibility of criticism and its mode has been shifted to appease university academic trends than of societal needs.

“For example, the current literary discourse is dominated by the topical issues such as gender studies, poverty, and farmer issues. This has made literature a meek follower of political discourse in vogue,” Praveer, who has a B.Tech in Chemical Engineering from IIT-Delhi and currently works with a risk management firm in Gurugram, told IANS in an interview.

“We are missing the discourse on universal and timeless issues such as empathy, moral dilemmas, metaphysics, poetic merits, horror, humor, children, lingual confusion etc. Of course, all great literary works are a product of their times and locale and embedded in them are the local political and societal problems; however, they often surpass these local limitations and lead to some profound universal truth,” he added.

The dominance of Hindi academia on the critical discourse, Praveer pointed out has created “a sharp divide among the young Hindi writers. The first group consists of traditional Hindi writers who are confined to writing for the literary journals that have very limited reach in society. The second group is made up of modern bohemian writers who are inspired by English pulp fiction”.

“They have adapted the setting to an Indian milieu; however, they treat books as consumable products with their sole focus on increasing the target market. Either of these two groups have not had any great success in reaching Hindi speaking world at large, so far,” he maintained.

Has Hindi managed to retain its purity or has it been corrupted largely due to the influence of Bollywood?

“Let us accept the reality that language is dynamic in nature. Whatever we call Hindi or good Hindi did not exist in this form some 200 years ago. With the advent of mass media, a lot of foreign words have been infused in our daily language to the extent that Hindi verbs are being replaced with English verbs. Now this is very annoying for linguists. Let me explain.

“Legitimate infusion of nouns from foreign languages is not a problem. However, bending the rules of grammatical construction corrupts the language and renders it incoherent and incomprehensible. The direct result of this corruption is that one immediately abandons the mother tongue and prefer to converse in a foreign language where the rules of grammar and mode of communications remain intact,” he elaborated.

More than Bollywood, Praveer lamented, Hindi society is to be blamed for the lack of love it continues to display for the language.

“There is no serious authority to talk about the corruption of Hindi language prevalent in mass communication media such as TV news channels and leading newspapers,” he said, adding he had termed this “an intended assault on Indian culture” in “Makar” that forms a part of his short-story collection titled “Uttarayan”.

“I am of the firm belief that Hindi is consciously and deliberately being degraded by Hindi academia and consumerist forces. It should be the writers’ onus to produce timeless classics to keep the language alive. Alas, Hindi writers have been losing this battle for past thirty years,” Praveer elaborated.

What was the thought process that went into “Kal Ki Baat”?

“Kal Ki Baat is a cry in a hypocritical world. These are collections of short stories, each of which could fit in a single page, and have been written over the past fourteen years. I primarily wrote these stories for my friends and colleagues, who speak Hindi but prefer not to read in their mother tongue. I fictionalized many familiar incidents and shared these with them. Some of them took interest, and many did not. Those who took interest are not avid readers but prefer short narratives and encouraged me to continue this series,” Praveer said.

“Kal Ki Baat”, he said “is a deliberate effort to bring back Hindi readers to universal human concerns which evade time and locale. These stories are humorous takes on our everyday lives, that aim to connect with the readers, and hopefully can bring awareness of the self and society at large.

“Shadi”, the first volume, like the first note of music, sets up the promise of diversity of topics and moods for the series. It contains 44 short stories (out of 99 numbered episodes) primarily dealing with children and encounters with beautiful girls – and ends with a defeatist investigation of Greek ideas of happiness, including Pyrrhonism (philosophic doubt, scepticism).

“Rishabh”, the second volume, deals primarily with the workplace and neighbourhood children. Human personalities have characterized behaviour that many-a-times can be predicted – this theme continues to resonate in this volume, which also discusses astrology and the idea of truth.

What next? What’s his next project?

“I am working on a series of stories based on the 13 principal Upanishads. Five of my stories, each based on a different principal Upanishad, have been published in reputed journals such as ‘Samalochan’, ‘Tadbhav’, and ‘Pahal’. It may take a couple of years to complete them. The Upanishads have been revered as the key source of all kinds of philosophical thoughts prevalent in India. Moreover, their highly poetic nature makes them difficult to understand, whereas also leave space for a modern interpretation.

“In addition, I have recently got involved in translating world poetry into Hindi with an able collaborator,” Praveer concluded.