Yoga is a Hindu discipline 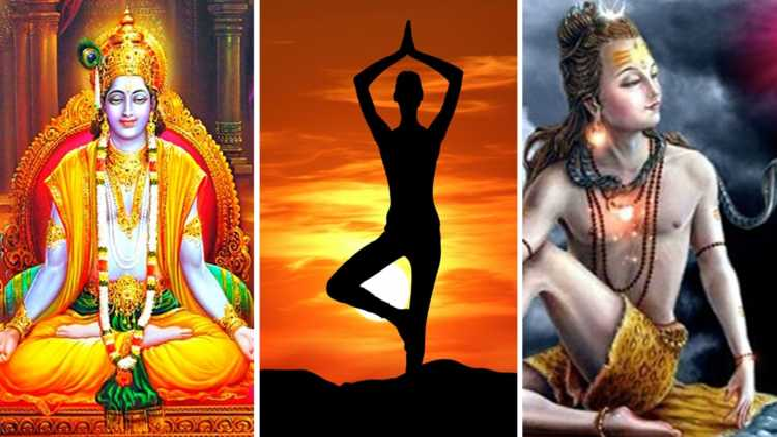 Attempts made to appropriate Yoga as a secular discipline and deny its purely Hindu origin as to milk it for money, necessitates the need for an explanation intended to inform Hindus and the rest of the world about the true nature of Yoga.

Definition – Yoga is defined as योगश्चित्तवृत्तिनिरोधः meaning, yoga is the cessation of fluctuations in the mind-stuff (Patanjali Yoga Sutra henceforth referred to as PYS). In Bhagavad Gita, a similar definition says, समत्वं योग उच्यते translated as, Equanimity (of the mind) is yoga.

These statements are often used by charlatans to dissociate Yoga from Hindu Dharma, overlooking the fact that these definitions occur in our sacred texts. On further elaboration, the works of Patanjali Rishi as well as all Upanishads on Yoga fully establish that it is one of the modes of attaining Samadhi, the eventual destination of all Souls as disclosed in Sanatana Dharma.

Let’s look at the shastras behind yoga and their application to establish this irrevocably.

PYS as well as other texts on Yoga establish an eight-fold path for practitioners of Yoga (with minor differences in sub-sections). The meaning and a brief explanation are given below: –

3. Asana (posture) – Steady and comfortable posture is asana. Asanas make the practitioner’s body and mind steady and keep him healthy and light of limb. Perfection in an asana is obtained when effort required to perform it ceases.

6. Dharana (concentration) – The steady abstraction of the mind assisted by Yama and other yoga angas is Dharana which is the cause of the crossing of the ocean of existence. Dharana represents the transition to a higher state, where awareness is completely withdrawn from the senses and focussed at one point. When the mind is active, Dharana does not take place. In dharana, Chetana i.e. awareness which is subtler than the mind becomes active. In practice, an image or a subtle manifestation of God is contemplated on.

7. Dhyana (meditation) – The continuous flow of attention towards the same point is called Dhyana. The difference between Dharana and Dhyana is Dharana is more concerned with the elimination of the fluctuating thought waves whereas Dhyana is maintenance of steady and profound contemplative observation.

8. Samadhi – There is no English equivalent for it, it can be described as total absorption of the individual consciousness in the Supreme consciousness, i.e. merging of Jivatma (individual soul) into the Parmatma (Supreme soul). The state of absorption brought about by one’s being lost in Dhyana is Samadhi. Samadhi is the generation of the consciousness relating to the oneness of the Jivatma and Paramatma.

The above, in a nutshell is what yoga is, a path to attain Samadhi. The fundamentals of Yoga are not up for alteration, they remain firm and unchangeable. All the flexibility it needs already exists in the rules and definitions. The description of Yoga itself, clearly proves it to be a Hindu discipline, one among the many, for realization of the Ultimate Truth and freeing oneself from the cycle of rebirth. For those who may need further elaboration, here it is.

Ishwarapranidhana, one of the Niyamas of Yoga, means total surrender to God. Its obvious that Yoga is not atheistic. Now coming to the exclusive Hindu nature of Yoga. Some charlatans quote PYS to say Ishwar is not defined as God, which is a complete lie. One of their favourite quotes is “tasya vācakaḥ praṇavaḥ”, claiming Ishwar is referred to as “Pranavah” not a Hindu God.

Now, Pranava is Om, which is the sound manifestation (Shabda Brahman, Naada) of the Supreme being (ParaBrahma).

Some may even quote “kleśakarmavipākāśayairaparāmṛṣṭaḥ puruṣaviśeṣa īśvaraḥ” meaning, God is a supreme being free from all causes of suffering – from actions, their consequences, and all latency. This again is the Sanatana Dharma definition of God. Vyasa’s commentary on PYS as well as all unaltered Spiritual texts of Hindu Dharma explain it more profoundly.

The Abrahamic concept of god doesn’t fit into this definition. Their concept of god being a jealous entity biased towards followers of his sect, does not have equanimity, does not transcend the gunas, is not free of kleshas. (Bible Nahum 1:2 – “The LORD is a jealous and avenging God; the LORD is avenging and full of wrath. The LORD takes vengeance on His foes and reserves wrath for His enemies”. Koran accepts this and Islam is biased towards its followers).

The rules of Karma are not accepted by Abrahamics. So, using Jesus or Yahweh as the object of meditation does not work in Yoga. Feeling of hatred and anger are not permitted in Yoga, Samadhi actually transcends feelings and non-feeling at the stage of Samadhi. The cessation of mind-stuff is obtained only through Samatvam, equanimity (as defined in Bhagavad Gita) by devotion and faith in, and meditating on, an unbiased God.

The object of meditation has to be the God mentioned in our Vedas, Puranas and Itihasas and his manifestations in male and female as well as the subtle forms (includes all Vedic, Puranic and Tantric manifestations). There are no contradictions in the different paths of Yoga taught in our Shastras (Mantra, Laya, Hatha, Raja and even Karma Yoga), they are complementary to each other and have been devised to cover the various approaches suitable for students based on their inherent qualities.

The article can be expounded further with more details of Yoga, but since it is meant for the layman, the above information is more than sufficient to understand why Yoga is a Hindu discipline. Only a spiritually and logically blind person will still insist it’s a secular discipline with no connection to Hindu Dharma.

Abrahamics have their disciplines, we have ours. We don’t appropriate their philosophy, they shouldn’t claim ours. Non-Hindus don’t have to convert to practice Yoga, but if they practice it correctly, they will eventually become practicing Hindus.

-By Abhilash Sukumaran (a 39 year old retired IT professional, a student of Yoga, Tantra, Vedanta and Hindu Shastras)

Constituents of the State in Hindu Polity