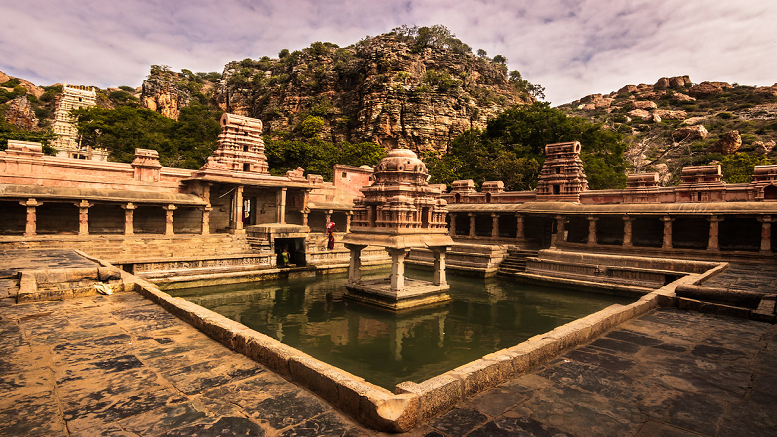 Yaganti in Kurnool district of Andhra Pradesh is famous for Sri Yagantiswamy Temple, also called Uma Maheshwara swamy temple dedicated to Bhagwan Shiva. The temple is said to be very old and got a face lift in 14th century by Vijayanagara rulers. The temple received significant patronage from Vijayanagara Kings Harihara and Bukka Rayalu, who finished the construction of several structures in and around the temple.

The Uma Maheshwara Temple at Yaganti houses the idol of Shiva and Parvathi (Ardhanareeswara) carved out of a single stone. This is probably the only place where Bhagwan Shiva is worshipped in an idol form instead of Shiva Linga.

Another unique feature of the temple is Nandi’s statue which has been growing in the size. According to the plaque displayed by the ASI (Archeological Survey of India), this Nandi statue in stone grows by one inch in every 20 years. The scientific reason attributed to this phenomena is that the rock has a growing or enlarging nature associated with it.

Yaganti is located near Nallamala hills that offer immense natural beauty and divinity to the location. There are several natural caves in the hills around the temple which were home for many saints throughout the ages.

An amazing feature of this temple is its Pushkarini with very pure water. No one knows how the water flows into Pushkarini in all the seasons from the bottom of the hills. Devotees consider that a bath in the holy Pushkarini before visiting Shiva is highly beneficial.

As per legend, crows do not fly in Yaganti. When Rishi Agastya was meditating here, Kakasura, king of crows disturbed him from his meditation so, he cursed the crows not to enter the premises. Thus, Shani also can’t enter this place as crow is the vehicle of Shani.

Rishi Agastya wanted to build a temple for Bhagwan Venkateswara at this site. For some reasons, murthi of Bhagwan could not be installed here, and rishi then did penance for Bhagwan Shiva. When Bhagwan Shiva appeared, the rishi realised that the place suited him better.

He then requested Bhagwan Shiva to appear in the Ardhanareeswara form, to which he obliged, and the idol in its present form is worshipped here. The great Telugu saint Potuluri Veera Brahmam of 17th century who wrote the book Kalagnanam, performed penance at this place.

It is believed that Bhagwan Venkateswara’s murthi in this place was present even before the Balaji temple was built in Tirumala Hills. Since this murthi is damaged near the foot it could not be worshipped.

The scenic beauty of the temple surrounded by mountains is a feast for the eyes and the spiritual atmosphere ignites the soul towards meditation.

The famous Belum Caves known for its speleothems, such as stalactite and stalagmite formations are located at a distance of 45 kms from Yaganti temple.

Belum Caves have a length of 3,229 m (10,593.8 ft), and the second largest caves on the Indian Subcontinent after the Krem Liat Prah caves in Meghalaya.

There are deposits of quartz in the caves and the caves consist of black limestone. Vessels belonging to 4500 BC were found in these caves. These caves were occupied by Jain and Buddhist monks 2000 years ago. It is one of the centrally protected Monuments of National Importance.