With start of ‘Pitru Paksha’, road to Moksha leads through Gaya’s Pretshila 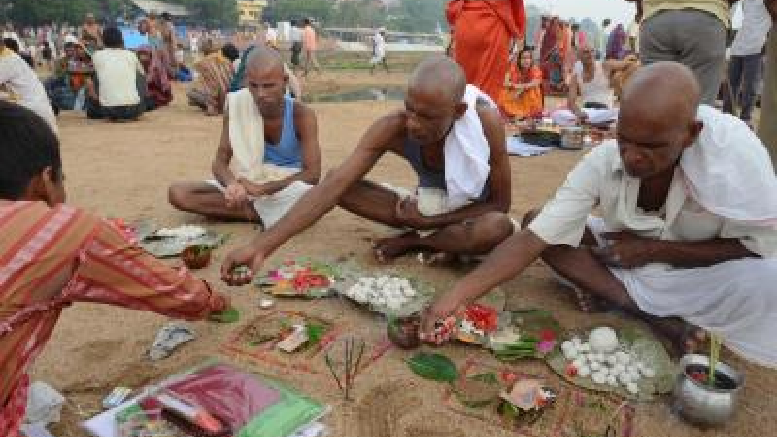 Gaya in Bihar is considered the top pilgrimage site for the moksha of ancestors. As per beliefs by performing ‘Pind Daan’, one’s ancestors get moksha while the one who performs the ritual gets rid from ‘Pitra Dosh’.

It is said that earlier there were 365 ‘Pind Vedis’ in Gaya, but at present it has came down to 54, out of them 45 are Pind Vedis and nine ‘Tarpanasthals’ – where people perform Pind Daan and ‘Tarpan’ for the moksha of ancestors during Pitru Paksha.

Out of them, the ‘Pretshila Vedi’ is considered very important. Riding on a palanquin, the physically helpless Pindadani reaches the summit of the 873 feet high Pretshila hill and prays for the moksha of the atma of their ancestors.

People come to Gaya from the ‘Pratipada’ date of ‘Ashwin Paksha’ till the end of Pitru Paksha and offer Pind Daan. It is believed that by performing ‘Shradh’ at the Pretshila Vedi, the atmas wandering in the ‘Pretyoni’ due to premature death or some other reasons also get moksha.

Panda Shri Ram Dhami says that there are footprints of Sri Vishnu near the Pretshila and there is a crack in the stones near this Vedi. It is believed that by performing Pind Daan here, it straightly reaches the ancestors or any member of the family who died prematurely and they attain moksha.

He said that at all the Pind Vedis, the Pind is given with sesame, jaggery, barley etc but at this Pretshila jaggery mixed with sesame are scattered. He said that the ancestors who after death harass their people, attain moksha after getting Pind Daan.

It is said that the name of Pretshila used to be ‘Premparvat’, but after Sri Rama came here and offered Pind Daan, this place was named Pretshila. Before Pind Daan in Pretshila, it is considered mandatory to take a bath and perform Tarpan in the Brahma Kund.