Why are Hindu religious bodies silent on Palghar and other Hindu issues? 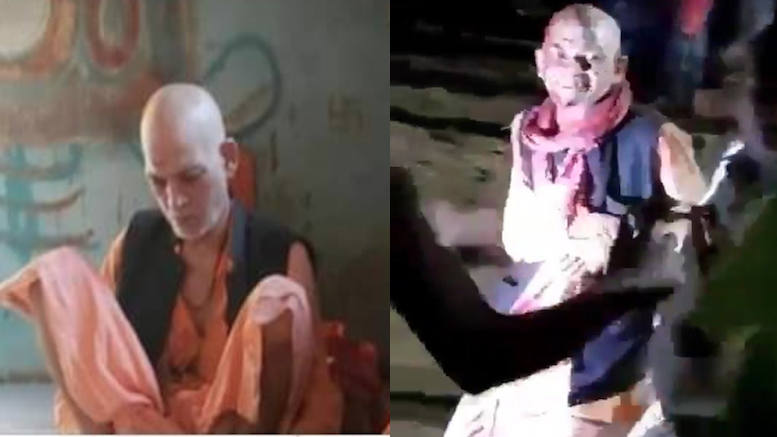 Ordinary Hindus are hurting. A sense of hopelessness is seeping into those who are most aware of the historical trends at play, and can make intelligent projections about the future.

Many are questioning the political class, especially the govt. Hindus had chosen with a historic mandate in 2014 and an even larger mandate in 2019. Yes, a lot has been achieved – Article 370 revocation, CAA passage, Ram Mandir judgement – in the last one year on what can be termed as civilisational issues, but such is the immensity of the obstacles that can now be seen clearly (and we must thank the last 6 years for allowing us the breathing space to achieve that clarity), that those same achievements now seem like low-hanging fruit.

While it is good to see Hindus question their elected representatives, and even nationalist organisations like RSS, one major player of society is strangely silent. Hindu religious bodies, whether community-specific or with pan-Hindu presence, have not made any significant comment or made their presence felt on the crucial Hindu issues of the day.

When two sadhus and their driver were lynched on 16 April by a 100-strong mob in Palghar, in the presence of Maharashtra Police that actually pushed 70-year-old Swami Kalpavriksha Giri Maharaj into the blood-thirsty mob, one thought that at last, Hindu religious bodies would take a stand on so egregious a crime.

Initially, it seemed that the gruesome incident had indeed jolted our samaj. A ‘Satvik Protest’ spearheaded by Juna Akahara & Hindu Dharma Acharya Sabha was held 2 weeks later, which demanded fast tracking the judicial process in the matter. Other Hindu bodies like Akhil Bharatiya Akhara Parishad, Sringeri Math, ISKCON too condemned the brutal lynching and demanded a high-level probe and speedy justice in the case.

In fact, on the day after the lynching, the Akhil Bharatiya Akhara Parishad (apex body of 14 Akharas including the Juna Akhara) had condemned the brutal killing and demanded strict action against those responsible. They said they will gherao (surround) the Maharashtra government in large numbers once the lockdown is over.

Over 6 months have elapsed and Maharashtra government is dragging its feet despite Supreme Court admonishments. What is the sadhu samaj waiting for?  A new video has emerged which shows the full brutality of the Palghar lynching and strongly hints at police complicity –

New video emerges showing gruesome killing of Hindu saints in Palghar as crowd cheered and Police Officers repeatedly pushed saints into the hands of bloodthirsty crowd. Some Policemen can be seen busy making video of the killings on their phones. https://t.co/kzfesLkK95

So distressing is the video that even Nilesh Telgade’s (the driver accompanying the 2 sadhus, who was also lynched) wife and brother are now demanding a CBI probe.

So I ask again – where are the crowds of sadhus and other Hindu devotees marching peacefully in unison demanding that the Secular State – both Mahahrashtra government and the Central Government – start investigating this matter seriously and hang those responsible, including any policemen found guilty?

Note: the above list is partial, and I apologise if some of those I have listed have indeed spoken on these issues but it escaped my attention. By the way, all these groups and individuals are doing important work, serving samaj in their own way. But the time to stay in our comfort zones is past.

Many Hindu religious organisations avoid Hindu civilisational issues for fear of being branded ‘political’ and offending ‘secularism’. But they are the only ones bothering with this weird form of crippling self-censorship. Of course, many of these institutions, especially the large temple trusts, are controlled by the State and thus barred from their core duty of preserving, defending and propagating Dharma – one of the key problems we need to address.

Let’s examine how Abrahamic religious institutions function with ease in both the religious and ‘secular’ spheres.

The Syro-Malabar Catholic Church of Kerala has no compunction in stating that Love Jihad in not an illusion and is endangering communal harmony and peace in Kerala, and neither does National Minority Commission (NMC) Vice-Chairman George Kurian.

When the ‘Christians under attack’ narrative was being peddled in 2015, Christian bodies & senior clergy across the country like Catholic Bishops Conference, United Christian Forum, Delhi Catholic Archdiocese, Archbishop of Kolkata, Church of North India all weighed in along with their international counterparts. They did not wait for a green signal from Congress to do so; on the other hand, they created conditions for AAP and Congress to reap the benefits in the 2015 Delhi assembly election.

When the Nagaland Baptist Church brazenly exhorts voters to choose ‘Christian principles over development’, it does not care whether it will be seen as pandering to ‘secular’ parties like Congress. On the contrary, it is making clear that any party seeking Christian votes in Nagaland will have to genuflect before it.

When National Education Policy was being discussed with various stakeholders, the Church was upset that its views were not prioritised over all others. They even have a body called Indian bishops’ Office for Education to influence education policy! The FCRA-NGO-Church alliance’s hold on government policies related to social justice, women & child development and allied fields is well known.

As for Muslim religious bodies, we all know the influence that Jamaat-e-Islami, Jamaat-e-Ulema-Hind, Deoband, Tablighi Jamaat, AIMPLB, Thowheed Jamaath, Zakir Naik, Zakat Foundation, Kerala Nadvathul Mujahideen etc exercise on Muslim polity and how eager they are to take political stands to protect what they believe are Muslim interests. Muslim politics is totally controlled by the mullahs.

Such is the fear of these bodies that all our ‘hard-hitting’ creative types in movies, web series, stand-up comedy and the ad world magically lose their boldness while representing Muslims and stick to sanitised, pre-approved templates of an ideal, God-fearing minority. And the grovelling, unconditional apology extracted from AIB by the Catholic Archdiocese of Mumbai shows exactly how degenerate ‘comics’ should be treated, but which we Hindus have failed to do.

The God-men of Abrahamic religions are equally comfortable with the Quran/Bible, as they are talking about laws, Constitution, politics, social issues and history (their version of it). They lead the way, their politicians follow. These communities do not depend on any one organisation or party – they have hundreds of independent organisations which sometimes work at cross-purposes but always present a united face to their common enemy, the Hindus.

So why are Hindu religious outfits and preachers so reluctant? No religion can survive without strong socio-political underpinning, and vice versa. Holding yourself back in the misguided belief that you have to honour ‘secularism’ is self-defeating. Our enemies have drilled this idea into our heads, while they themselves flout it with contempt.

If you are harboring the hope that these issues will resolve themselves at the political level, while you will stay in the background and focus on your religious work, society as a whole will have to pay a terrible price. Our enemies will pick us off one by one. It could be Sabarimala today, and Mahakaleshwar tomorrow; Diwali, Jallikattu or Durga Puja – none will be spared; sooner or later all will be petitioning the Secular State for ‘minority’ status like Lingayats and Ramakrishna Mission before them. The way things are headed – even murti puja will be questioned one day under the ‘essential religious practises’ test our judiciary is so happy to apply on diverse Hindu spiritual paths.

And let’s not tie ourselves in knots about how Hindu sects and communities should first resolve their internal difference before putting up a united front. There are multiple schisms within Chirstian and Muslim religious groups too – often with bloody consequences. There is currently a feud going on between Jacobite and Orthodox factions of the Church in Kerala, Sunni-Shia divide is real and even orthodox Sunni groups are at loggerheads with Wahabbis/Salafis, and so on. So Hindus are not the only ones with intra-religious differences, but we are the only ones with an established tradition of resolving those differences through debate or agreeing to co-exist harmoniously.

There are 4 basic issues on which all Hindu religious groups need to unite, and each group should build a well-trained set of preachers adept at preaching their specific religious teachings & tradition, but who can also speak in one voice on the common legal and other challenges facing ALL Hindus –

2.) Education and curriculum reform NOW to end anti-Hindu bias. All schools to mandatorily teach Dharma as a separate subject.

4.) Special laws to protect Hindus – from hate speech, grooming, land grab, attacks on their festivals & traditions, and against judicial/legal intervention in their religious practises. Constitutional amendment to accord state/preferred religion status to Hindu Dharma and other indigenous religions.

One way of restituting control of Hindu institutions to the community and to ensure that Hindus have a say in policy matters is to constitute autonomous bodies in each state consisting of representatives from all the Dharmic traditions specific to the region. These autonomous bodies can then be tasked with overseeing management of temples, deciding the Dharmic curriculum for the state, settling differences related to religious traditions, and facilitating Dharmic preaching and other works in the state. But working out these mechanisms is secondary, the first step is to take a united stand on the do-or-die issues facing us all.

Hindu Dharma and Hindu civilisation would never have survived if not for religious leaders and organisations that emerged from time to time. We need our religious institutions to enter this modern kurukshetra if Hindus are to survive with dignity into the next century.