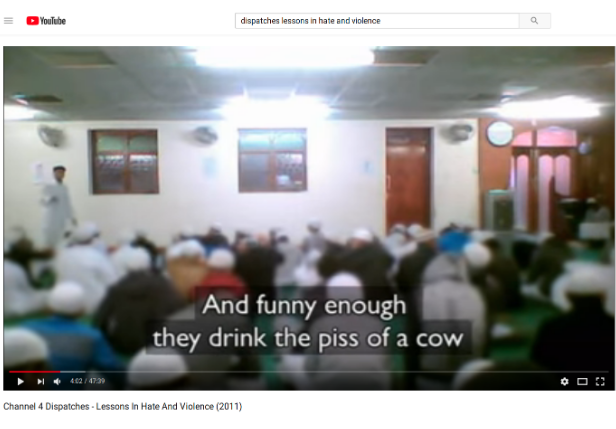 Have you ever wondered what Muslim children are being taught in their mosques, especially about Hindus?

Britain’s highly regarded Channel 4 Dispatches TV program did undercover filming in 2011 at a very important Islamic school in England— Darul Uloom Islamic High School, Birmingham UK.  You can watch the dispatches episode that covers this. It is named “Lessons in Hate and Violence” (so you can imagine what teachings are imparted there). Here is the video:

Now, we Hindus come in for special consideration in the video.

“But there are some people in the world who do not use their intellect.

They are happy worshipping idols…Who worships the cows?” 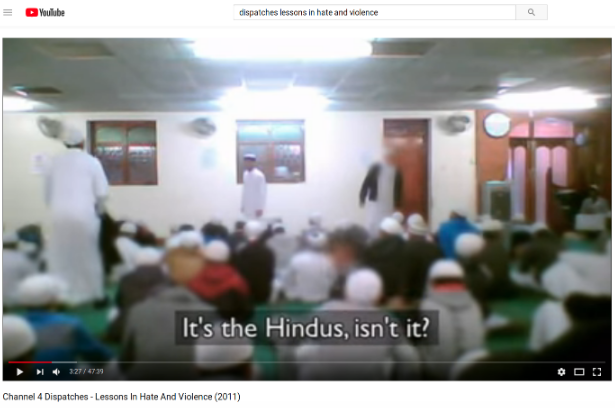 “If we choose to worship such ridiculous things, a cow?

Now how can anyone worship a cow?” 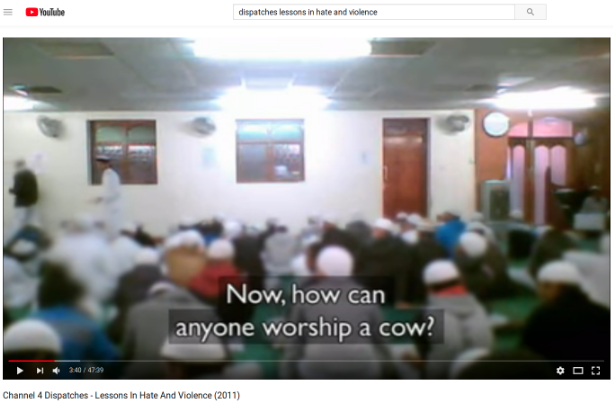 Then he goes on to try his best to desecrate and lampoon Hindu religious beliefs, culminating in “they drink the piss of the cow.” 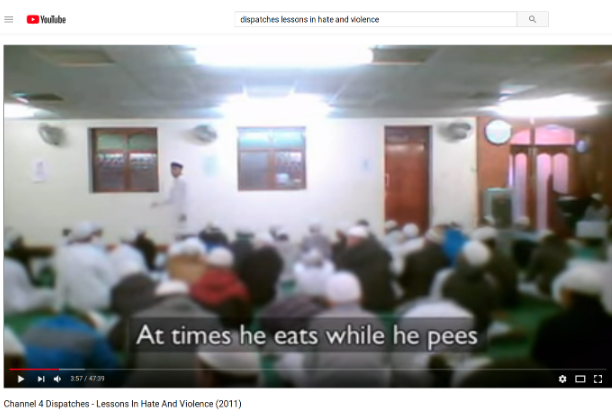 I have not transcribed the entire passage since I would like readers to watch the video.  I will now pass to more general discussion.

I have never seen any core Hindu scripture recommending drinking the urine of cows. For sure, the Vedas and the Bhagavad Gita do not mention anything of the sort. No Sruti literature has any such mention, and cow urine is only mentioned in Ayruvedic treatises for certain medicinal treatments.

In contrast, the most highly regarded of Hadith (Bukhaari and Muslim) recommend drinking the urine of camels:

Some people came to Madeenah and fell sick. The Prophet (peace and blessings of Allaah be upon him) told them to drink the milk and urine of camels, and they recovered and grew fat. In the story it also says that they apostatized and killed the camel-herder, then the Muslims caught them and executed them.

Back to the video.  Notice how the Hindu world view of “divinity everywhere” is lampooned and caricatured into “they think cow is God and drink its piss.”  In other words, they want the students to think that “we Muslims worship Allah, and Hindus worship the cow. The cow is their God, just as Allah is our God.” A shocking number of Muslims seem to believe this bigoted worldview, given by ignorant comments I see on internet sites.

Let me clarify in just a few sentences.  Hindus believe that Brahman is both immanent in its creation, and transcendent from it.  It (Brahman is neither male nor female) is immanent, meaning it is in creation, and creation is a valid representation of Brahman, and the only one we have any hope of understanding and feeling.  Therefore, everything within creation is imbued with divinity. A cow, an ant, a plant, anything, has a divine essence. Indeed, the consciousness of each of these is a part of the consciousness of Brahman, since Brahman alone possesses consciousness; no other consciousness exists independent of Brahman’s.  In that sense, yes, “cow is God” and “I am God”. More clearly, nothing exists but God. It is ridiculous to think that anything has an independent existence from God. THAT is ridiculous to the Hindu mind.

But a cow does not have the creative power of God, namely Ishwara.  In other words, the cow is not Ishwara, and I am not Ishwara. But the cow’s and my existence is part of the same substratum of existence which is Brahman.

You see, Hindu philosophy and metaphysics evolved to a far higher degree than the “God created this world in 7 days” type of thinking.