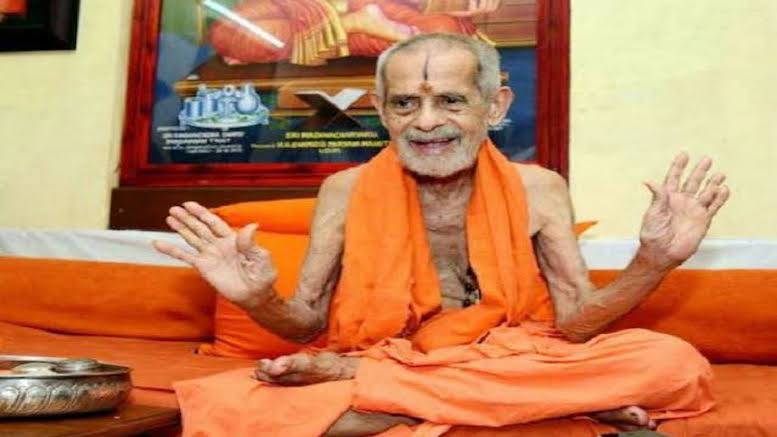 In the Dharma Sansad held in Udupi, it was he who gave the key Mantra of ‘Hindavah Sodaraa Sarve, Na Hindu Patito Bhavet’ (‘Hindus belong to a common fraternity, No Hindu can be fallen”). He worked hard throughout his life to remove caste discrimination in the country and to build a harmonious society.

In Udupi’s Dharma Sansad itself, Pujya Swamiji had also demanded that the rights mentioned in Articles 29 and 30 of the Constitution of Bharat be extended to all Bharatiyas. VHP always had his blessings and guidance. The VHP would follow the path shown by revered Swamiji. In the upcoming year, Varsh Pratipada (New Year) is on 25th March, Sri Ram Navami (Sri Ram’s Birthday) is on 02nd April and Hanuman Jayanti (Sri Hanumanji’s Birthday) is on 08th April. The Vishva Hindu Parishad conducts programs of Sri Ramotsav every year throughout the country during this period. Hurdles on the way for construction of Sri Ram’s Janmabhoomi Temple have been overcome. If Sri Ramji wishes, then some work of constructing the grand Sri Ram temple at his haloed birthplace in Ayodhya may start.

We urge the Hindu society around the world that this time Shri Ramotsav should be celebrated collectively in every Hindu house, in every temple and in every village. There will be big celebrations in all those villages across the country from where consecrated Sri Ram Shilas (bricks) were sent to Ayodhya. This Sri Ram Janmabhoomi Temple will take the country towards Rashtra Mandir – Nation Temple.

As this temple is constructed, the VHP will –

The Vishva Hindu Parishad will remain untiringly and unceasingly active to achieve these objectives.

VHP Board of Trustees also passed a resolution in its meeting about the anti-Hindu conspiracies hatched by the governments of Telangana and Andhra Pradesh in Southern Bharat. Giving some examples of the anti-Hindu policies of both the state governments in the resolution, it was said as to how these governments are not only attacking Hindu values and points of reverence, shrines, saints and pilgrimages relentlessly but also, through their Christian and Muslim appeasement policies, crossing all limits. They are also promoting unconstitutional and communal activities.

The VHP’s Central Board of Trustees warned these state governments to stop these anti-Hindu policies at the earliest, otherwise Hindu society would be forced to launch massive agitations. At the same time, VHP also called upon Hindu society to fearlessly oppose these appeasement policies and actions in order to protect its temples, shrines, culture and self respect.