Valmiki Ramayana- a personification of righteousness 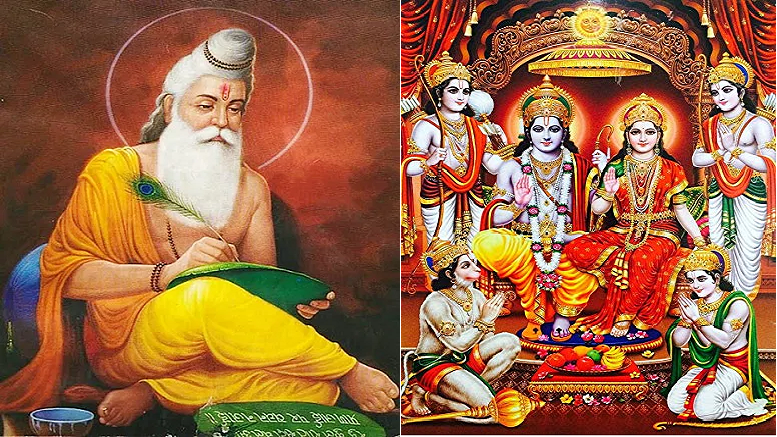 “Ramo Vigrahavan Dharma“ says Maareech to Ravana while talking about Rama, saying Ram is a personification of Dharma (righteousness).

This is the first sloka uttered by Maharishi Valmiki and that led to the writing of Ramayana by him with the grace of Bhagwan Brahma. The above sloka says that Valmiki curses the hunter who kills a male bird (crane) when it is making love with its female counter part in a forest. This incident tells two important lessons-

1. One should not interfere in other’s freedom.

2. One should not harm others without a valid and justifiable reason.

Valmiki subtly indicates in this sloka that man should adhere to certain norms in a society and one who violates those social norms has to be punished. In this sloka, Valmiki highlights the conduct and behavior of individuals, the society, socially acceptable behavior by the people.  No wonder it is said – Nanrushi Kurute Kavyam, which means only a sage can a great book. Valmiki was a great sage and therefore, his Ramayana has become a Maha Kavya and not only Adi Kavya.

Vishwamitra was a king who became Brahmarshi by doing severe penance. Gayatri Mantra was propounded by Vishwamitra. The message in this is that one does not become a Brahmin just by birth but only by acquiring knowledge (Brahma Jnana).

When King Dasaratha orders Rama to go the forest, Rama’s mother Kousalya and his brother Lakshman express their reluctance for the same. Then Rama tells them “practice of righteousness (dharma) will lead to attainment of material wealth (ardha) and fulfillment of desires (kama) in a legitimate manner, whereas obtaining such material wealth and fulfillment of desires through improper ways will not only be futile but also prove to be much costlier in the long run.”

Righteousness protects those who protect it (Dharmo Rakshati Rakshithaha) is the belief that has been in practice in our land for time immemorial.

When Rama rejects his wife Sita’s request to accompany him to the forest, Sita says, “one’s parents and siblings experience and suffer both the good and bad effects of their own deeds, whereas one’s wife alone will not only experience and suffer the good and bad of her own deeds but will also share that of her husband as well.“ Thus, the sharing of both joys and sorrows together by the husband and wife is depicted beautifully in Ramayana.

Before proceeding to the forest, when Rama was residing in an ashram in Chitrakut Parbat, his brother Bharat pleads with Rama to come back to Ayodhya and take charge as the King. During the course of this conversation, a brahmin by name Jabali tries to convince Ram to assume the role of King of Ayodhya by saying that though the materialistic world is visible it is an illusion and therefore, it has to be experienced and enjoyed for what it is.

Ram declines Jabali’s proposition and responds to Jabali by saying that though his advice is meant as a well wisher it is not the right thing to do. Ram goes on to say that truth is the ultimate state of righteousness and Raj Dharma is very old which is based on righteousness.

Valmiki conveys through the character of Ram that adherence to the path of righteousness is very essential for the ruler and there is no scope for even an iota of selfishness in it.

While describing the dates of important events in Ramayana like- the birth of Rama, Rama’s leaving Ayodhya to the forests, Hanuman’s visit to Lanka, the first day of the war waged by the army of monkeys led by Ram in Lanka and the date of Ravana’s death, Valmiki makes special mention about the planetary position in the sky on those respective days in a detailed manner.

The planetary positions described by Valmiki on the dates of various events as mentioned above also validate the sequence and timing of those events i.e., from Rama’s birth to Ravana’s death according to the planetary science. Based on these studies it is estimated that the period of Ramayana dates back to at least 7,000 years or even more though other standard historical evidence is yet to be discovered to scientifically confirm the same.

Absence of archaeological evidence validated by scientific studies and limitations in calculating the dates based on astronomical signs alone, since the planetary positions have repetitive cycles, make the determination of the exact period of Ramayana relatively difficult.

The trees, fruits and flowers found in different locations in Dandakaranya presently also match with the same described in detail in Ramayana. All these things add credence to the belief that Ramayana is a historical event like Mahabharata.

Our Vedas, Upanishads  and epics are very ancient. In those ancient days documentation and passing on to the next generations as historical evidence was very limited or non existant. Still Bharat is fortunate to preserve its ancient knowledge mainly because of the tradition of Guru sishya parampara where the ancient knowledge gets passed on to the next generations through sravana (listening) and smarana (memory).

Our ancestors did not bother about asserting the ownership of the knowledge acquired by them as they believed in sharing the knowledge with the rest of the world for the welfare of the universe.

Ravana brings Sita to Lanka against her wishes. When Hanuman goes to Lanka in search of Sita and meets her, she says, “I will not touch any male person other than my husband Ram. Ravana brought me to Lanka when I was in a helpless position.” Valmiki explains beautifully the relationship of husband and wife and the importance of the institution of marriage in Sanatana Dharma.

After seeing Sita in Lanka, Hanuman along with the army of monkeys comes back to Kishkinda and tells Rama, who is anxious to hear about the whereabouts and her welfare, “Oh my Lord! Mother Sita is safeguarding her sanctity as a virtuous wife and she is healthy.” Valmiki in one single sentence through Hanuman conveys to Rama that Sita is not only alive but she is also safe without any harm from Ravana.

Before he lit fire to Lanka, when Hanuman was captured and brought to the court of Ravana, on seeing Ravana for the first time, Hanuman thinks within himself, “Ravana is highly knowledgeable, versatile and a person of great valour. If he adheres to the path of dharma he would have become the King of even devaloka. Ravana could have become an unconquered king in the world if only he adhered to the path of righteousness.”

Valmiki, through Hanuman, subtly conveys the message that if one does not follow the path of righteousness then he will face a downfall even though he may be the most powerful and the greatest warrior.

Valmiki, thus explains the importance of how one should be righteous in his acts towards others even though others might have deviated from their path of righteousness.

It is said that Valmiki wrote Ramayana in 24,000 slokas. Through the portrayal of the character of Rama in Ramayana, Valmiki conveys to the world that one should strictly adhere to the path of righteousness, evolve into an ideal human being and be a role model to others. Ramayana will live as an ideal and sacred book as long as the mankind exists on this earth.

No wonder Ramayana is not only Adi Kavya but also an eternal master piece and gift to the universe that is to be preserved and practiced for adherence to one’s dharma in his life.