Sri Krishna Matha is a Hindu temple located in the town of Udupi in the southern state of Karnataka, Bharat. It is one of the Ashta Mathas of Udupi established by the Dvaita philosopher Sri Madhvacharya. The beauty and the traditions  of this place attract thousands of devotees throughout the year.

There are many religious sites around the temple including Anantheshwara Temple,which is one of the oldest temples in Karnataka.

The presiding deity is a murti of Bhagavan Balakrishna facing west (originally east) created out of black Shaligram stones with a milk churning rod in his right hand and a coir-rope in his left hand made by the divine architect Sri Vishvakarma himself.

Maa Yashoda, the foster mother of Sri Krishna had the great fortune of witnessing his transcendental pastimes during his childhood. But Maa Devaki, the one who gave birth to him was denied this pleasure due to her imprisonment by the wicked Kamsa fearing his death at the hands of her eighth child. 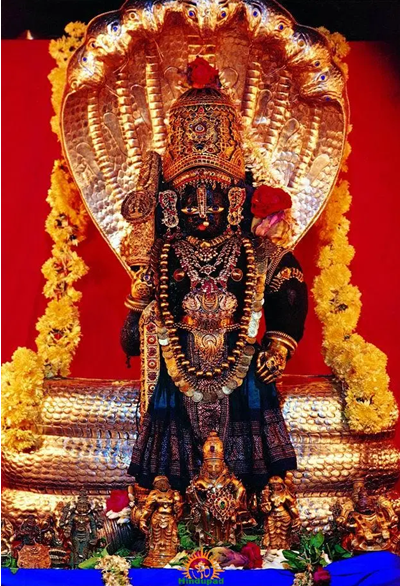 Devaki expressed her desire to see his childlike form which Krishna accepted, changing his form to Balakrishna and exhibited his deeds. Rukmini, his first wife too witnessed the auspicious scenes which filled her heart with devotion. She requested him for a murti of that form so she could worship it always. Krishna then asked the divine architect Vishwakarma to craft an exquisite and beautiful murti out of shaligram stones which was completed soon and gifted to Rukmini in Dwaraka.

Many years later,the fierce Mahabharata war erupted which saw Dharma win over Adharma. But, Gandhari cursed Krishna to be a witness to the destruction of his own clan due to the death of her 100 sons.

36 years later, the curse bore fruit. The Vrishnis fought with each other,destroying the entire clan sparing only a few people. Balarama gave up his body in rapt meditation. Krishna too sat under a tree, immersed in yoga. A hunter Jara shot an arrow at his leg, assuming it to be a deer. Krishna then left his mortal body and headed to Vaikunta. The murti was found by Arjuna, who hid it in Rukmini Vana.

Over the centuries, the murti got covered in gopichandana. A merchant found it and decided to use it as a weight for his ship. But one day, the ship was caught in a huge storm and he did not know what to do. At that point, Shri Madhvacharya prayed to Vishnu for safety and waved his saffron garment, after which the storm subsided.

The grateful merchant asked the saint to accept anything he wanted from him, to which Madhvacharya decided to take the lump of gopichandana. On the way, the murti revealed itself, adding to his joy. He started to worship the idol at this very place.

Later,the famous Kannada composer Kanakadasa came here, but was not allowed to see the deity because he was from the Kuruba background. He prayed to Krishna, to which the murti started moving from east to west to give him darshan.

1. The deity can be seen only through a nine holed window called Navagraha kindi.

2. He can also be viewed through Kanakana kindi which is silver plated.

4. This is the only temple which has a chariot made out of navaratnas or nine gemstones, which costs approximately 7 crores to build. Golden chariots and palanquins are also present.

5. It was at the Madhva sarovara that the murti revealed itself and obtained its powers merely by the touch of Madhvacharya.

6. Every two years, the Paryaya occurs where the administration of the temple changes hands.

7. During Navratri, Krishna is himself worshipped as the Navadurgas for 9 days.

8. A unique pooja called Laksha Thulasi arcane is done when a lakh thulasi leaves are offered to the deity.