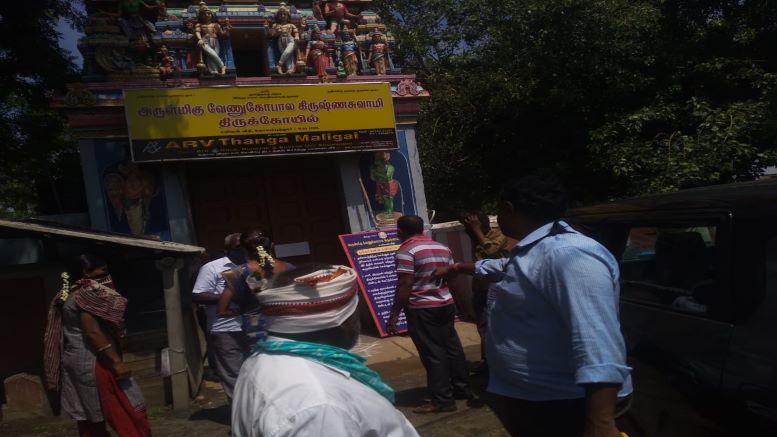 Coimbatore was gripped by tension as a suspected atheist threw raw pork on two adjacent Hindu temples in Sullivan Street on Friday morning. The meat was discovered on the doorsteps of Sri Venugopala Krishnaswamy Temple and Sri Raghvendra Swamy Temple by a 65 years old flower vendor R Baby.

As per the police, Baby saw a masked man carrying the bags and placing one each in front of the two temples at around 10.30AM on 29th May. Initially she thought that the man had placed flowers at the doorsteps but when she went closer the stench of meat emanated from the bag placed outside Sri Raghavendra Swamy Temple. She removed the bag and promptly informed the temple authorities of the same. The miscreant had managed to escape by then.

The residents of the area informed the police authorities and several police officials including Deputy Commissioner of Police (DCP, Law and Order) L Balaji Saravanan visited the spot. By that time more than a hundred Hindu Munnani (HM) members who had learnt of the incident gathered outside the Sri Venugopala Krishnaswamy Temple and indulged in protests asking for the miscreant to be identified and caught at the earliest.

HM leader Guna said “the miscreant threw the meat outside the first gate of Sri Raghavendra Temple and placed it on the doorstep of the other temple. We aren’t sure of the intention of the culprit. It could either be to desecrate the temple or cause communal disharmony in Coimbatore. The incident has taken place at a time when we had recently held protests asking for reopening the temples from 1st June. If the police fail to arrest the culprit immediately and take strict action against him then HM will hold massive protests”.

Considering the sensitivity of the case more than 50 policemen have been posted in the area. It has also been learnt that both temple premises have been sanitised with sanitisers and turmeric water.

As per reports the police booked a case on the basis of two separate complaints registered by head of Sri Raghavendra Temple Sri Ranganathan and Executive Officer of Venugopala Krishnaswamy Temple Poonkodi. The police then went through the CCTV footage to gather more clues with regard to the culprit. On the basis of the CCTV footage and as per the description given by Baby the police identified the culprit and arrested him at around 4.30 PM.

As per the information provided by a police official the culprit is a civil engineer degree holder named Hari who belongs to Coimbatore’s Koundampalayam and is currently jobless. He purchased the pork meat at Koundampalayam and travelled by his motor bike to place it outside the temples. The official informed that an inquiry is being conducted with regard to the motive behind his demeaning act. A case has been booked against Hari under three different sections of the Indian Penal Code including Section 295A (hurting religious sentiments).

This person the previous day, was the culprit who threw meat at the temple.

He did it in broad day light, in front of witness and cameras.

He drove 13 klms, missing
All the temples on the way.

An engineer, cannot have psychological issues as claimed by police. pic.twitter.com/JHH2li0ggf

Indu Makkal Katchi has tweeted a video of the culprit and stated that he belongs to an atheist organisation from Tamil Nadu who is using a Hindu name. They even hinted at the possibility of the accused being a convert who hasn’t changed his name. It may be mentioned here that often times Hindus who convert to Christianity or Islam do not change their names or castes for fear of losing caste benefits. They remain Hindus on paper while in reality they practise their converted religion.