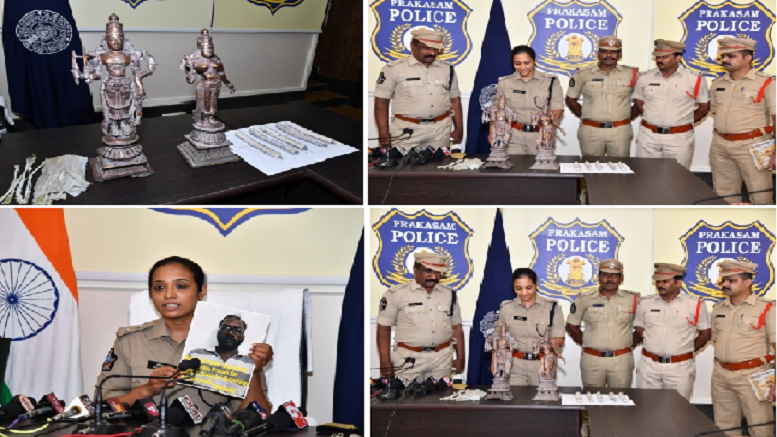 One person was arrested in Andhra Pradesh’s Prakasam district on Monday after being found in illegal possession of two ancient ‘panchaloha’ (made of five metals) idols and a quantity of explosives.

A panchaloha idol of Vishnumurti and one of Satyabhama, worth about Rs 50 lakh, as well as five gelatin sticks and 10 electrical detonators, were recovered from Shaik Karimulla, 25, who was subsequently arrested under various sections of the IPC and the Explosives Act.

Police were searching vehicles at Addanki Circle from 8 a.m. after a tipoff about the movement of a temple theft offender.

Around 9 a.m., Karimulla, who was carrying a gunny bag on his two-wheeler, came from Singarayikonda side but stopped on seeing police and turned back in panic. Police chased him and apprehended him.

When police opened the gunny bag, they found the idols and explosives. On interrogation, Karimulla, who said that he worked in a granite factory, revealed that he came in touch with Mendu Natarajan Sanjay Nadh, 35, at a tea stall a couple of years ago and they became friends, and it was Nadh who gave him this consignment.

Police said that Karimullah told them that in December 2018, he was at the tea stall, when Nadh came to him and handed over these articles, asking him to keep them safe till he returned.

When he never came back, Karimulla, after waiting for a long time, set out on Monday to sell them away to any jeweller in Addanki to only end up getting caught by police.

Prakasam Superintendent of police Mallika Garg said the Vishnumurti idol is 21 inches tall and Satyabhama idol 19.2 inches, and as the police is not sure of the origin of these idols, they are sharing the measurements and pictures so that people with knowledge will contact them.

“We have not been able to identify where these are from. We are going to ask archaeology experts regarding the origin of the idols… We have released the photos of the idols along with the dimensions so that if anybody has any information about it, they can give it to us,” the SP told IANS.

Garg said they also shared the picture of Nadh.

“Based on our enquiries, he has been missing for the past three years. So if anybody has any information on this person, we would like to get it,” she said.