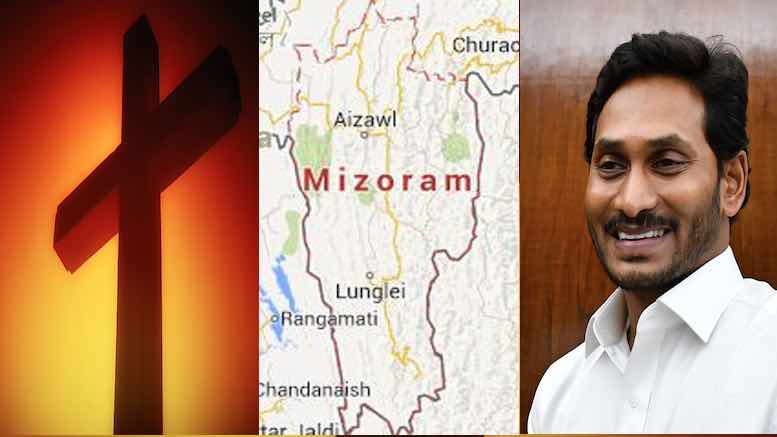 In a chilling reminder of how societies can turn on themselves and start celebrating their former colonisers, the state of Mizoram on Monday observed ‘Missionary Day’ to “commemorate the 127th anniversary of the arrival of two Welsh missionaries in the state in 1894”.

“All government offices and some business establishments remained closed as the administration declared a public holiday. Though worship service could not be held due to COVID-19 restrictions, some people offered prayers at the memorial stones of Welsh missionaries Reverend J H Lorrain and F W Savidge…at McDonald Hills in Aizawl.

The missionaries had set foot on the banks of Tlawng River near Sairang village in the then Lushai Hills on January 11, 1894. Gradually, all Mizos converted to Christianity under their influence.

They created the Lushai (Mizo)-English dictionary and established the Presbyterian Church in north Mizoram and Baptist Church in the southern part of the state.

The Baptist Church of Mizoram (BCM) began observing Missionary Day from 1971 onwards, while the Presbyterian Church, the largest denomination in the state, began observing it from 1974.”

So a celebration that was first conceived by colonising churches after wiping out the indigenous and syncretic belief systems that had prospered for centuries, is now being celebrated by the Government of Mizoram.

Is it any surprise then that a former Mizoram CM, Lal Thanhawla, who also happens to be a veteran Congress leader, was seen supporting demands for ‘Independent Christian Country of Mizoram’ during anti-CAA protests in the state that were fuelled by anti-Hindu bigotry, which has percolated so deep that it has blinded Mizos to the fact that Christians are equally persecuted in Pakistan as Hindus, and that CAA offers a path to safety for Christian refugees too.

And how many of us know about the fate of the Hindu Bru-Reang tribals from Mizoram whose persecution was triggered by radical Christian missionaries in 1997, leading to their internal displacement within their own country and seeking refuge in Tripura. The Bru tribals endured a terrible spree of looting, burning, killing and raping in Mizoram because they resisted conversion to Christianity.

It was only after the Modi government came to power that the centre finally paid attention to the plight of the Bru people. First, an attempt was made to resettle them in their traditional homelands in Mizoram. But when it was found that the Bru who returned received second-class treatment and the state could not guarantee their safety from radical Christian terror groups, they were finally settled in Tripura with a rehabilitation package.

As we have mentioned in an earlier article-

“Christianity has spread like wildfire in the North East only in the last one century. The share of Christians in the population of Mizoram shot up from 3% in 1911 to 90% by 1951. As per 2011 census, Christians are a clear majority in 3 out of 7 North Eastern states – Mizoram (87%), Meghalaya (75%), Nagaland (88%) and a dominant force in Arunachal at 30% (where Hindus are 29%, tribal faiths 26%) and Manipur at 41% (Hindus too are 41% there). Yet, almost all these states have refused to give minority rights to Hindus and tribal faiths or even set up Minority Commissions.

Much of the tribal populations of the 7 North Eastern States today is Christian – this mass conversion & irreplaceable, permanent loss of such rich cultural & religious diversity has gotten zero attention from Bharat’s left-liberal intelligentsia, who shout themselves hoarse over Ghar Wapsi (return to indigenous religions/belief systems) of even 1 person.

Another defining feature of the North East is the political dominance of the Congress party, until recently. Naturally, the Church and Congress share a symbiotic relationship and both are upset at the entry of BJP-NDA in this region.

The dominant Christian Church in each state is open about its political affiliation. The Mizoram Presbyterian Church took an anti-BJP stand urging its congregation to abstain from voting for the BJP in the recent Assembly elections. Before Nagaland state elections the Baptist Church spewed anti-Hindu rhetoric while exhorting voters to choose “Christian Principles over Development”.

Radical Christian-Maoist terror groups issue ultimatums to Hindus of Assam and Tripura to flee or be killed, and no one in Lutyens’ media even bats any eyelid.”

So what religion or belief system did Mizos follow before they were converted by the British-Raj backed Welsh missionaries? Western indologists will tell you they were ‘animists’ i.e. worshippers of natural things like trees, rivers, sun, animals etc believing all these have a distinct spiritual essence. Now, think how is that different from mainstream Hindu Dharma beliefs like worship of rivers, sun, trees etc?

Another clue lies in the 2017 discovery by ASI of murtis of Hindu devi-devatas like Ganesha, Kalki and Makara guarded by Neolithic menhirs at Vangchhia, Champai district of Mizoram. Of course, Christian fundamentalists stridently opposed and denied these findings.

All it took was 40 years to Mizos to disconnect from their roots and become fans of the same colonial forces that looted our country. The danger still persists in other regions, 70 years after political independence from the British. In many ways, the danger is more potent in today’s age of FCRA funding, social media information dissemination, smarter Church strategies in guise of social justice, and a majority Hindu population punch-drunk on the kool aid of ‘secularism’.

#JaganConstantineRaj is not just another twitter hashtag, or conspiracy theory, but something unfolding before our eyes as a rerun of what Mizoram and other states of North East underwent a century ago. Earlier, the missionaries were British-backed, today they are mainly supported by America, with the twist that local missionaries are now being unleashed on unsuspecting Hindus of their own and other states.

This is also something to ponder for those thinkers who claim that the West is a natural ally of Bharat, and both should join hands to counter China’s rise. Are we ok with such an alliance where we are forced to surrender our Dharma, civilisational heritage and roots for some material gains?