The Axis and the Perimeter of the Temple – Part 3 The Axis and the Perimeter

The Agniksetra or the later temple plan of the Vedic ritual represents two significant numbers, 180 and 54, which, when doubled, correspond to astronomical knowledge related to the 360 days of the year (attested in the Rgveda) and the ubiquitous number 108, which shows up as the number of beads in the rosary (japamālā), the number of dance movements (karanas) of the Nātya Śāstra, the names of the God and the Goddess, the number of pithas, the number of dhāms, the number of arhats, and so on.

This number 108 has traditionally been derived from the auspicious number 9 when written as 1 + 8, from where it also become the auspicious number 18 of the number of Purānas, or the chapters of the Bhagavad Gita. The number 108 is further seen as being auspicious since it is 27×4 where 27 is the number of naksatras. Some have pointed to its noteworthy number theoretic properties such as the symmetry in its representation as the product of the square of 2 with the cube of 3. The number 1,008, also considered auspicious, is viewed as the enlargement of 108 with the interposition of a 0, but this argumentation is incorrect since 10,008 is not an auspicious number. In truth, the auspiciousness of 1,008 is related to the fact that the Kalpa has 1,008 mahāyugas, and thus this number symbolizes completion of time.

In my Astronomical Code of the Rgveda, I argued that the correct interpretation of 108 is the distance to the sun and the moon from the earth in sun and moon diameters. This number codes a fundamental measure related to our physical universe. Figure 7 presents these proportions. 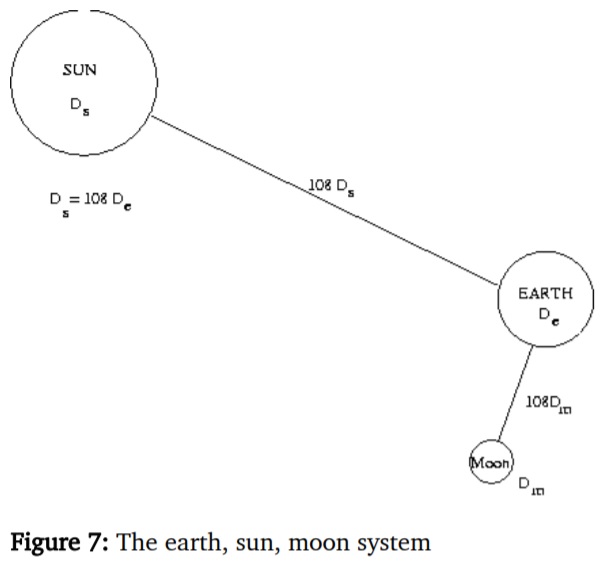 It is thus correct for these distances to be approximated by the figure of 108. The origin of this number in ancient Bharat may be the discovery that a pole of a certain height removed to a distance of 108 times its height has the same angular size as the sun or the moon. Therefore, the knowledge of the astronomical significance of this number in ancient Bharat is not to be taken as anomalous. But since such a comparison made by the naked eye can only be correct to 1 or 2 percent, it seemed logical to take the number to be the round number 108.

This interpretation of 108 cannot be taken to be a coincidence since we also have the numbers 261 and 78 explicitly associated with the atmosphere and the sky.

Taken together, they add up to 339, which is approximately equal to 108×π, in accord with the notion that the sun, 108 units away from the earth, will inscribe 339 disks from rising to setting. These numbers also show up in the very organization of the Rgveda and other texts, as I have explained elsewhere, confirming their centrality in Vedic cosmological thinking.

This measure is also at the basis of the estimated distance to the sun in ancient canonical treatises. On the other hand, there is no evidence for the correct estimate of the size of the sun.

The plan of the Hindu temple, as seen in its earliest form in the Agnicayana rite, is a representation of the cosmos. Its axis, from the western gateway to the garbhagrha in the east, represents the distance to the sun (or the moon), and its perimeter represents the duration of the year in terms of the number 360.

Specifically, the ratio 360/108 would characterize the standard temple in the proportions related to perimeter and axis. Some later temples deviate from this standard in a variety of ways; in some, the perimeter is not the lunar year of 360 tithis (or civil year of as many days) but
rather its count of 354 days. In others, the representation of the axis and the perimeter is not in linear measure but rather expressed symbolically.[11] Such deviations from the prototype make the layout unique and interesting and can tell us much about the cosmological ideas of its times.

The temple itself, in its three-dimensional form, codes several rhythms of the cosmos and specific alignments related to the geography of the place and the presumed linkages of the deity and the patron. The architecture may also incorporate themes related to royal power if it was built at the behest of a king.

But this does not mean that the relationship of the Hindu temple is to the physical cosmos alone. The Vedic philosophy of bandhu takes the numbers 360 and 108 to be central to the inner cosmos of the individual also. Therefore, walking 108 steps to the sanctum, or doing the 108 beads of the rosary, is a symbolic journey from the body to the heart of consciousness, which is the inner sun.

The Hindu temple has continued to reflect astronomical numbers and orientations, which is seen most dramatically in the great temple of Angkor Wat in Cambodia.[12]

Research: The Axis and the Perimeter of the Temple
Author: Shri Subhash Kak