Temple land encroached by family in Thanjavur for six decades 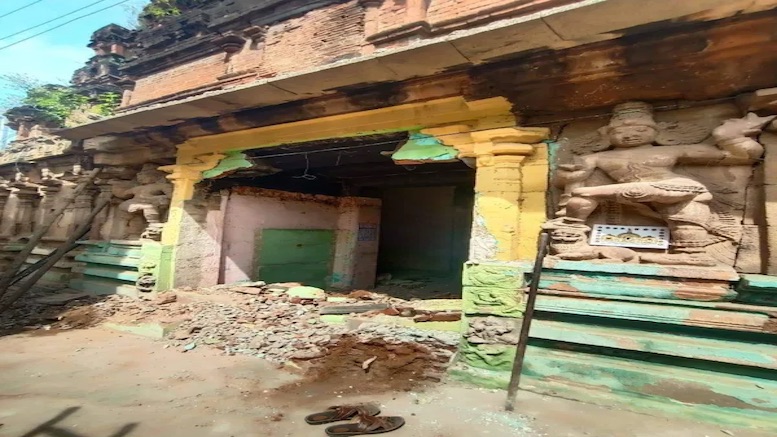 We have come to know innumerable stories of temple land, complex, tank, other built properties’ encroachment by Abrahamics and in some cases even Hindu politicians through HinduPost reports. This one is a unique incident among all the ones we have reported so far. A living, thriving temple’s Raja Gopuram (the main entrance and highest tower of a temple) has been encroached by a family for nearly 60 years.

One may want to decorate the interior of one’s house and want to have exquisite chandeliers or at best the billionaires would buy an artifact or two to have as the pride of their possessions. A family in Thanjavur topped all these by simply converting the Raja gopuram into their house. Thopparangatti Vinayagar temple said to have been built in the Vijayanagara period, is situated in the main part of Thanjavur town. Its main deity, Vinayaga derives his name from an incident when he asked for Thoppai Aaram (an ornament around the belly). This temple has a Raja Gopuram which was leased out to a temple worker decades ago, allegedly because he had no place to live. The 430 square feet area was leased out to one Sabapathi Pillai nearly 60 years ago. To the shock of the public, he constructed a house in the mandapam under the Raja Gopuram effectively making the ornate tower function as his roof.

After Sabapathi his son Jayaram and his wife Shyamala started living there and the mandapam was converted into a fully functioning house with windows, doors, etc. Despite the continuous opposition and complaints of Hindus of the area, the HRCE (Hindu Religious and Charitable Endowments) department which looks after the administration of the temple wasn’t forthcoming in retrieving the Raja Gopuram.

After Hindus’ persistence, HRCE issued an eviction notice to Shyamala who was living alone in the ‘house’ in January 2019. However, she had the tenancy agreement which meant it wasn’t really an encroached property. So later HRCE issued an order to terminate the tenancy after which it was declared as encroachment and steps were taken to retrieve the Gopuram.

Even after terminating the tenancy agreement and serving eviction notice, the family adamantly stayed put claiming that they had the right to live there. So HRCE officials went with necessary devices to carry out the anti-encroachment drive. The entrance wall of the house was demolished and the Gopuram was reclaimed. It is reported that the joint commissioner of HRCE will write to the higher authorities seeking for the renovation of the great tower. Once the renovation works are over they plan to install an idol inside the mandapam under the tower and start performing pujas regularly.