A CSI pastor has been accused of sodomising and molesting young men and women who come to his church and the seminary of Madurai-Ramnad diocese. The information spread like wildfire after posters were put up in Madurai demanding his arrest.

Rev.David Jebaraj, a presbyter in the CSI cathedral in Narimedu, Madurai became popular after posters bearing his name were stuck all over Madurai and found their way to social media. As per the investigative report in Kumudam Reporter, David Jebaraj who worked in the Madurai-Ramnad CSI diocese was transferred to Sivakasi recently.

The reason for this transfer is said to be the charges of sodomy levelled against him by seminarians (youngsters who train to become priests). A victim narrated his ordeal to Kumudam Reporter saying that the pastor pressurised him to enroll himself in the seminary. When he refused to do so, the pastor scared his parents into admitting him into the seminary.

He told them that the guy had affairs with church going girls and could be seen loitering with them. He said that unless he was given priestly training it would not be possible to save his future. With no way to escape from his parents’ wrath, the victim joined the seminary.

He took it to the archbishop to formally file a complaint with the diocese. The diocese administration transferred him to Sivakasi pastorate. Jebaraj is mentioned as the director of the Junior Church Ministries program and as the correspondent of the Teacher Training Institute run by the diocese.

Even though the diocese acknowledged the audio recording of pastor Jebaraj, it didn’t take any action on him. Instead the archbishop is said to have given Rs.15,000 to the victim and advised him to continue his priestly training in Bengaluru seminary. The victim wants justice and is ready to file a complaint with the police if the synod doesn’t punish pastor Jebaraj. 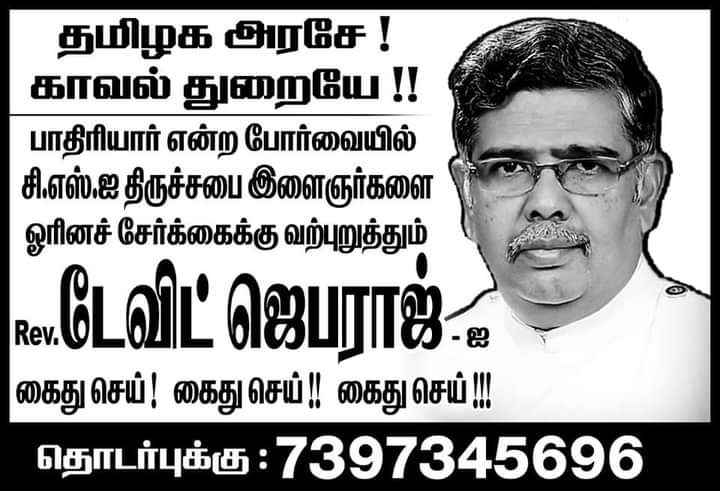 As a part of the protest against pastor Jebaraj, posters were put up in many parts of Madurai saying “Tamil Nadu Government and Tamil Nadu Police, Arrest Rev.David Jebaraj who forces young men of CSI diocese to indulge in sodomy” and “CSI synod and Archbishop of Madurai-Ramnad Diocese, initiate action against Rev.David Jebaraj who sexually abuses men and women laity of the diocese”.

The pastor’s daring attitude and the diocese’s nonchalant behaviour proves why Christian institutions are unsafe for budding children and young adults.