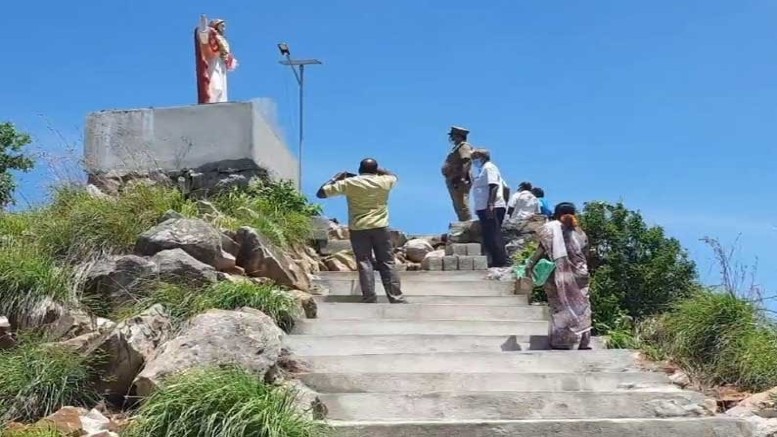 Villagers thwarted an evangelist’s attempt to build a church encroaching a hillock in Tamil Nadu. A small hillock in a village in Kallakurichi was encroached by an evangelist who built a small church on the top. After villagers protested and registered their opposition with the authorities, revenue department officials have stopped the construction.

A hillock, Modangal Malai, is located in the outskirts of Moongilthuraipattu village in Sankarapuram, Kallakurichi. An evangelist is said to have been constructing a small church on the top of the hillock for the past few months and installed the statues of Jesus and Mary. Villagers opposed this and protested against building the church. They registered their opposition with the local authorities and demanded that the construction be banned.

Following this, a team led by Tehsildar along with Superintendent of Police(SP), Sub Inspector of Sankarapuram and Village Administrative Officer inspected Modangal Malai and the illegal structure. Upon investigating it was revealed that the hillock comes under the purview of the Forest Department and hence building a church there is illegal.

It came to the authorities’ notice that no rules were followed or necessary permission sought to build the church. SP instructed the revenue officials and police to stop the construction citing that allowing it might disturb law and order in the village. Hindu Munnani(Hindu Jagran Manch) led the protest against the church and successfully stopped its construction.