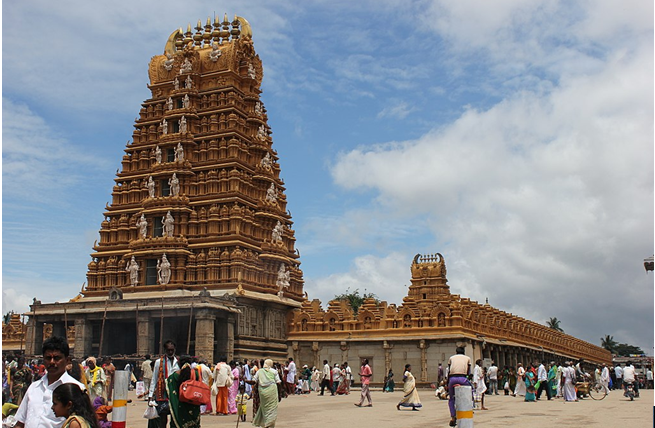 The Nanjundeshwara temple is located in the town on the right bank of river Kapila, a tributary of the Kaveri river. Nanjangud is also known as “Dakshina Prayaga ” or “Prayag of South ”.

In Kannada, Nanju means poison.  Hence, Nanjundeshwara means “the God who consumed poison” which is attributed to Samudra Manthan.

Nanjangud is mentioned as Sri Garalapuri in the Shiva Purana. It is said that the legendary holy place is an abode of Bhagwan Shiva in southern Bharat. Bhagwan Shiva appeared at the plea of his devotees, the Devas and Sage Narada.

The demon Keshi, obtained the boon from Bhagwan Brahma and Bhagwan Vishnu, that they shall not be able to kill him. He assumed that with this boon, he is as good as immortal and began troubling the people, the devas and the Sages. Finally Devarishi Narada along with the devas pleaded Bhagwan Shiva to save everyone.

Bhagwan Shiva appeared in Garalapuri Sri Kshetra and killed the demon Keshi. He assured that his Ansh – a part of his divine Self shall always remain here and bless humanity. He assured this place shall be a ‘paapa vinashini’ – remover of sins. Every human praying to Bhagwan Srikanteshwara or Nanjundeshwara (Bhagwan Shiva) of Nanjangud, after bathing in the holy river of Kabini, will be rid of sins and blessed by Bhagwan Shiva.

In another story, Bhagwan Parashurama, after beheading his mother as per his father Rishi Jamadagni’s orders, wanted to atone for  “Mathru Hathya” – matricide. As per the advice of sage Narada, he reached Garalapuri (Nanjangud) and prayed to Sri Nanjundeshwara Swamy. Bhagwan Shiva appeared and advised Rishi Parashuram to build a mantapa and perform pooja to the Shivalinga.

While clearing the shrubs with his Parashu – axe, unconsciously Bhagwan Parashuram’s axe hit the Shivalinga and the tip of the Shivalinga began bleeding. Sage Parashuram felt very guilty and said, “I have committed another unforgivable sin, only by killing myself I shall be relieved from all my sins”, and prepared to kill himself.

Bhagwan Shiva appeared and blessed sage Parashuram and told him to apply wet mud upon the Shivaling (the mud of Sri Nanjangud has immense healing powers). The shivaling stopped bleeding. Bhagwan Shiva advised Bhagwan Parashuram to build the Mantap and continue his penance.

Finally, Bhagwan Shiva blessed sage Parashuram and relieved him from all his sins and blessed him with immortality. Devi Parvati, consort of Bhagwan Shiva wanted to visit this holy place. He brought Devi Parvati to Garalapuri Nanjangud. Devi went to the Kabini river and bent down to touch the water. A gemstone bead – mani fell off from her crown into the water. Bhagwan Shiva was pleased and declared, “Devi, until now, the place had my divine blessings and presence, from this moment it shall have your presence, grace and blessings too. It shall also be called as Dakshina Manikarnika Ghat.”

The Srikanteshwara Temple can trace architectural styles of various periods. Overall, it follows the Dravidian style of architecture. The Garbha Griha was built during the period of the Cholas or the Gangas. The anterior mandapa was added in the 13th century.

The next stage of construction occurred during the Vijayanagara period when a brick and mortar shikara was added to the shrine. The brick and mortar gopuram was added in 1845. This gopuram stands 120 feet tall and features 7 tiers. 7 gold plated Kalasas stand over the Gopuram. Each of these Kalasas is about 10 feet tall.

The prakara has multiple niches that house 122 images of Shiva in various forms, Ganpati, Saptamatrika and other deities.

The Saiva sculptures deserve special mention. These sculptures are crafted from stone and metal and show Shiva in various poses. The temple also houses a stone sculpture of Krishnaraja Wadiyar III and his four wives. He gifted the temple a silver horse and 2 wooden chariots amongst other things.

The temple measures 160 feet by 385 feet covering an area of 50,000 square feet. This makes it the biggest temple in Karnataka.

The temple is the focal point of many religious festivals. The annual Panchamaha Rathothsava sees devotees from both Sri Vaishnava and Shaiva sects come together. A procession with 5 chariots is the highlight of this festival.

The Ganapathy Ratha is the first of these 5 chariots. It is followed by the Chandikeshwara Ratha, the Gautama Ratha, Subramanya Ratha, and lastly the Parvathi Ratha. The Gautama Ratha is about 90 feet tall.

During the Maha Shivaratri festival, devotees take a dip at the Kapila river before visiting the temple. 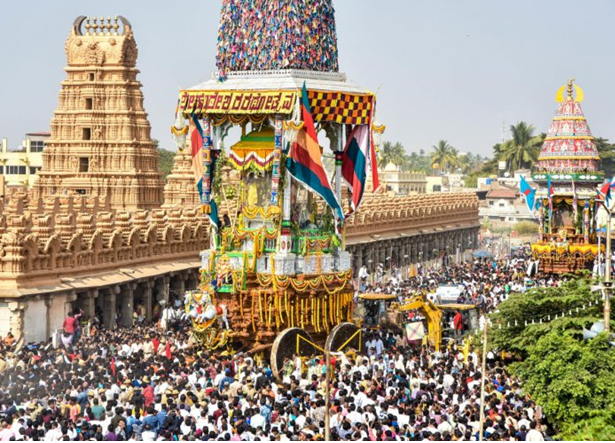 The water and the soil around the river banks are believed to possess curative properties that cure various diseases. Hence Nanjundeshwara is also worshipped as Bhavaroga vaidya.