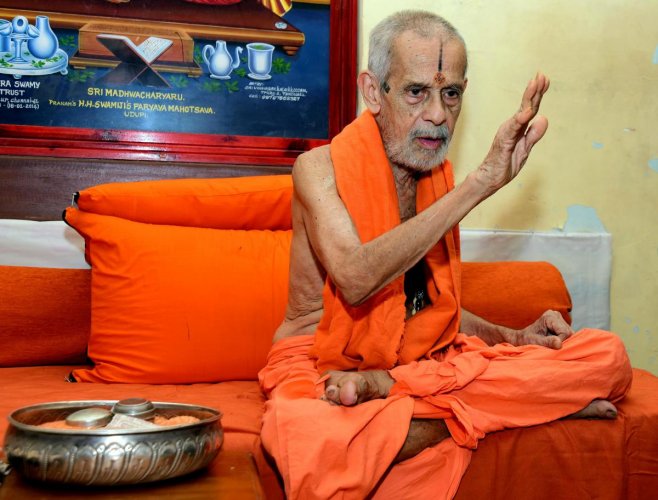 Leaving millions in tears, Sri Sri Vishvesha Teertha Swamiji left for his heavenly abode on December 29th, 2019. He was 88 years of age. He was not just any Hindu guru or saint, but the former presiding Swamiji of the Sri Pejavara Adokshaja Matha, which is one among the Ashta Mathas belonging to the Dvaita school of philosophy, founded by Sri Madhvacharya.

Born on April 27th, 1931 as Venkatramana, Swamiji asked his Guru to grant him Sanyasa Deeksha at the tender age of seven and was initiated into Sanyasa in December 1938. On December 3rd, 1938, near the sacred Hampi, he was renamed Vishwesha Teertha. Even as a little boy, Swamiji exhibited an extra-ordinary zeal for knowledge and an intense devotion towards Krishna. He undertook the first of five Paryayas and meditated on Udupi Sri Krishna from January, 1952 to January, 1954. During this time Sri Sri Vishwesha Theertha Swamiji laid the foundation of Akhila Bharata Madhwa Maha Mandala in January 1953.

He participated vigorously in debates and vakyartha organized by the Mysore Maharaja throughout the 20th century. During the 1960s, he helped tremendously in laying the foundation of the Vishwa Hindu Parishad. The Pejawar seer was an ardent supporter of the Ram Mandir movement and founding of the Vishwa Hindu Parishad was only the first step toward the great, and now realized dream.

He started his second Paryaya on January 1968 and completed it in 1970. During this time, he also inaugurated the Krishna hospital at Udupi.

One of his major service for Dharma was his endeavors towards the eradication of untouchability. The programs he pursued took the shape of a revolution.

“In our homes and public places, do Dalits enjoy the same opportunities that Christians and Muslims do? When they approach us after having converted, we do not discriminate against them. That being the case, aren’t we conceding that other religions treat them with humanity while we do not? Is there a greater insult to our Dharma and society than this?” His sharp observation forced open the eyes of religious conservatives who were tainting Hindu Dharma by perpetuating caste discrimination in society. He helped counter and fight the large-scale conversion of Dalits in Meenakshipuram, Tamil Nadu. His kind but resolute eyes, and calm smile convinced even the staunchest of all opponents.

He was a multi-faceted personality who didn’t shy away from taking a stand on political matters when times and circumstances demanded. He had expressed his vehement protest against the 1975 Emergency forced on Bharat by the Indira Gandhi government, and wrote a strong letter criticizing the arbitrary move; he stated that he was ready to be sent to jail, but authorities should let him continue with his Dharmic practices.

In 1978, Swamiji helped in the construction of 150 houses after the 1977 Andhra Pradesh cyclone left thousands of people devastated and homeless. The same year, he inaugurated the Anant Mutt at Badrinath.

Behind the frail structure and barely audible voice, stood a man of massive determination and perseverance. Not only did he work for the cause of Dharma but served humanity beyond the barriers of religion. In 1980, he established the Sanjeevini Vidya Samsthe – Residential High school, College in Karnataka, and in 1994, he founded a research center in Bengaluru, Poornaprajna Samshodhana Mandira. Even the Akhila Bharat Madhwa Maha Mandala set up by him has aided in the betterment of numerous poor students. He also established many math centres at holy places in Bharat to help pilgrims.

From January 1984 to 86, he completed the third Paryaya. In 1988, he gave Sanyasa Deeksha to his successor Sri Vishvaprasannatirtha Swamiji, and then completed his fourth Paryaya from 2000 to 2002. He had recently completed his fifth Paryaya in January 2018.

The Swamiji has presided over 35 Sudha Magala ceremonies and personally educated over hundreds of scholars every day, throughout his life. Sri Sri Vishvesha Theertha Swamiji was revered by many leaders who stand very tall in the country’s polity, the present Prime Minister being among them. No leftist pseudo-liberal could dare to call him by communal epithets despite his great dedication towards the interest of Hindu Dharma. For his great service to the country and to the Sanatanis, we shall always remain indebted to him.