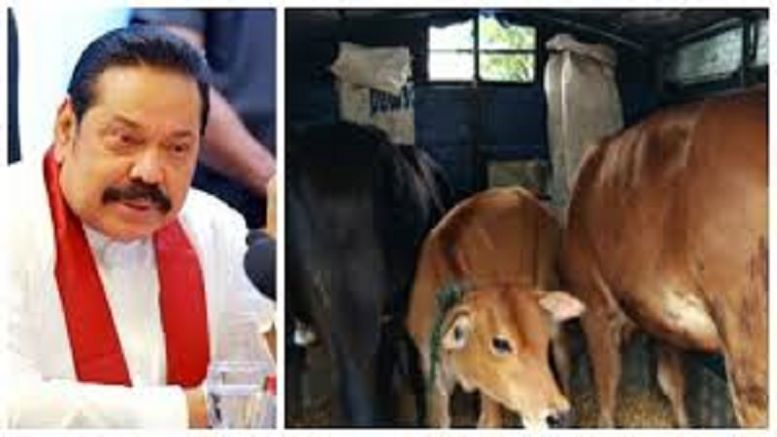 Cabinet Spokesman Keheliya Rambukwella who provided information regarding this decision stated that Prime Minister Mahinda Rajapaksa had expressed his desire to ban cow slaughter in the meeting which was commended and welcomed by all the SLPP Members of Parliament (MPs) who were present at the meeting.

Rambukwella also added that the PM is yet to submit an official proposal in this regard but will do so at the earliest. Furthermore, the PM will select an apt time and place to formally put forward the proposal for banning cow slaughter before the cabinet.

The reasons for cow-protectionism in Sri Lanka and Burma include sharing of Indian cultural practices, incorporation of Hinduism in Buddhist religious life, justification from Buddhist scriptures and centrality of the cow to agriculturalist ethos.https://t.co/a2GSlCHeWj pic.twitter.com/8v3rX3CtNR

This move comes as a big win for Sinhala Buddhist and Hindu groups for whom cattle protection stems from a sense of religious obligation. Although, the contents of the said law are yet to be framed, it is expected that it will by and large follow the Buddhist principles of cattle protection.

While talking of the Buddhist ideology behind this law, it is necessary to mention PM Rajapaksa’s opinion in this matter. He stated that this decision was being taken by him in his capacity as the Minister of Buddha Sasana, Religious and Cultural Affairs, and added that it was in keeping with the vision of Buddhist revivalist and nationalist leader Anagarika Dharmapala during whose time this proposal was mooted. Dharmapala was a contemporary of Swami Vivekananda and participated in the World Parliament of Religions in 1893 at Chicago.

It is also pertinent to mention that on June 8th, 2017 a resolution was passed to protect cows by Buddhist and Hindu activists from across the country who had gathered at the Sri Sambuddhathwa Jayanthi Centre at Thummulla Junction in the presence of Mano Ganesan, the Minister of national co-existence dialogue and official languages, who was the chief guest at the event.

The proposed law is, therefore, a long-cherished dream of these activists ultimately coming to fruition. Cow protectionist movements are not new for the Buddhist nation and are centuries old just like its neighboring Bharatiya sub-continent nations such as Bharat, Nepal, and Burma among others.

Buddhism much like Hindu Dharma asks humans to be compassionate towards fellow living beings. Sinhalese Buddhists have, however, always displayed a special affinity towards the cow and in recent times there has been a greater demand from activists to implement a total ban on cattle slaughter.

According to a 2017 research paper the cow exceptionalism in Bharatiya sub-continent Buddhist nations such as Burma and Sri Lanka stems from the fact that they are geographically close to Bharat which has resulted in the exchange of cultural practices. It also points out how many Buddhist Sinhalese, besides worshipping Hindu Devis & Devtas, have integrated Hindu rituals and practices in their religious life. PM Rajapaksa’s decision also takes into consideration the religious sentiments of ethnic groups such as followers of the Kiri Amma (the milk mother) sect, a deity who is associated with the cow and considered to be a guardian deity.

Besides the sizeable Hindu population follows Shaivism in which cows and bulls are revered and worshiped. Hence, cow protectionism in Sri Lanka is practiced in both multi-ethnic and multi-religious ways.

20 of the 28 states in Bharat have implemented laws that ban Cow Slaughter in varying degrees. The only exceptions are North-Eastern states, West and Kerala. Gujarat has the most stringent law in this regard where The Gujarat Animal Preservation (Amendment) Act 2017 provided for a maximum punishment of life imprisonment and a fine of up to Rs. Five lakhs. It is also worth mentioning that the amendment makes it a non-bailable offence.

While the final draft of the proposed law is yet to take shape, the Mathugama Pradeshya Sabha, a local government body in the Kalutara District had already passed a resolution in 2018 banning the slaughter of cattle in any form for any reason inside the areas administrated by the Sabha.