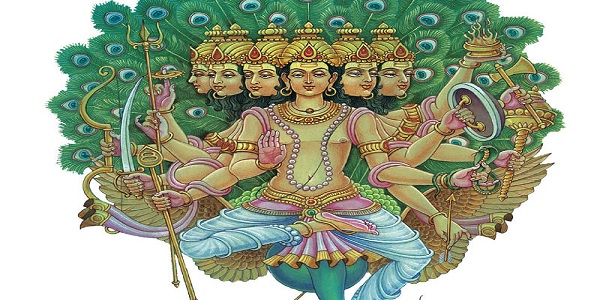 Kartikeya is the God with six heads, twelve hands, rides on a peacock wearing a spear (Vel in Tamil) in his hand as a weapon. Bhagwan Kartikeya is also known as Muruga, Skanda, Shanmukha and Kumara Swami. He is found in many medieval temples across the country in Ellora Caves and Elephanta Caves. 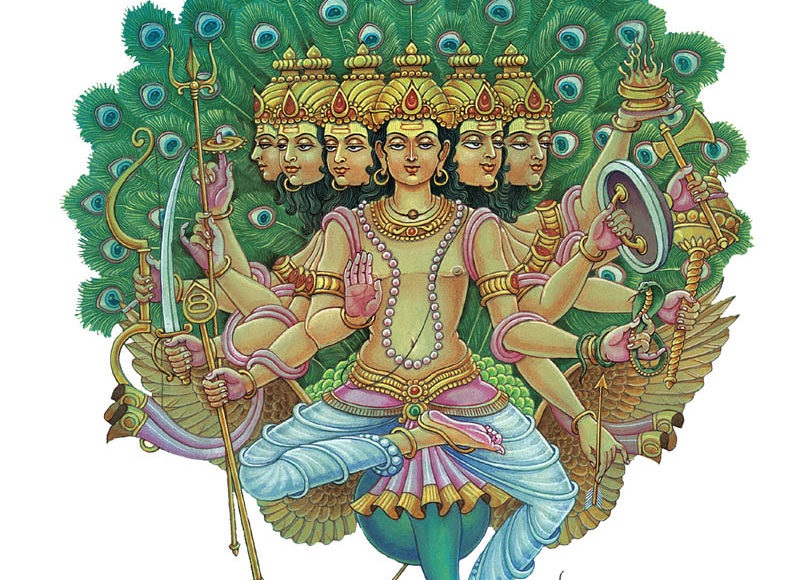 Kartikeya was a major God for the Ikshvakus, an Andhra Dynasty, and for the Gupta Empire. Several Pallava dynasty rulers were named after Kumara or Skanda (300-550CE).

In Chinese Buddhism, Skanda has been portrayed as Weituo, a young heavenly general, the guardian deity of local monasteries and the protector of Buddhist dhamma.

The Jain deity Naigamesa, who is also referred to as Hari-Naigamesin, is depicted in early Jain texts as riding the peacock and as the leader of the divine army, both symbols of Kartikeya. Kartikeya’s youth, beauty and bravery was much celebrated in Sanskrit works like the Kathasaritsagara. Kalidasa made the birth of Kumara the subject of a lyrical epic, the Kumārasambhava.

This temple is located near (around 10 Kms) the city of Madurai on a hillock. This is the place where Kartikeya marries Devasena (adopted) daughter of Indra. Kartikeya is worshipped as Bhagwan Subramanya in this place. This is a cave temple that was built in the 8th century by a king named Maravarman Sundara Pandiyan

After winning the battle with asuras and their leader Tarakasur, Bhagwan Kartikeya worshipped Bhagwan Shiva in this sacred place. This temple is situated along the shores of the Bay of Bengal near Tuticorin port. The 2000 year old temple that finds place in ancient texts like- Skanda Purana, Sri Subramanya Bhujanga Stotram of Adi Shankara and others, has an entrance tower measuring 140 feet.

This temple and its surroundings have withstood many devastating cyclones including the Tsunami in 2004 reinforcing the faith of the people on this temple. Out of the Aru Padai Veedu (six war houses) of Bhagwan Kartikeya, Thiruchendur alone is situated in the seashore and the rest are all situated in hills.

Ganas are attendants of Bhagwan Shiva and live in Mount Kailash. When Bhagwan Shiva anointed his other son Sri Ganesh as the head of the Ganas, Kartikeya gets angry that he was not given the chance to head the ganas and leaves Kailash. He comes to this place and resides here. Then, Bhagwan Shiva tries to pacify Kartikeya saying, “you are the wisdom personified and no one can match you.”

The Palani Murugan Temple is known as Dhandayuthapani Swamy Temple, since here he is worshipped as Dhandayuthapani or the one who is holding a staff in his hand. The temple was built in the 9th century by the Chera king Cheraman Perumal.

This temple is just 5 Kms from Kumbakonam. One has to climb 60 steps to reach this temple and these 60 steps are considered to be the Hindu calendar of 60 years.

Tiruttani is said to be the place where Bhagwan Subramanya married Valli, one of his two consorts subsequent to winning the battle with asuras and their leader Tarakasur. This temple is located around 90 KMs from Chennai, near to Tamilnadu and Andhra Pradesh borders. The hill temple has 365 steps representing the days of a year.

This temple is 20 kms from Madurai and located on Solaimalai hill with a holy stream nearby called “Nupur Ganga”. Out of the six Arupadai Veedu temples, this is the only place where Kartikeya graces the devotees with both his consorts Valli and Devasena.

Bhagwan kartikeya is also known as Subramanya. Once, the four Deva Rishis (Sanaka, Sanatana, Sanatkumara, and Sanananda) visit Mount Kailash to worship Bhagwan Shiva. These Rishis are considered to be immortal and always appear as five year old children but with vast saintly knowledge. As they are detached from the material world, they remain naked.

Upon seeing these sages, Kartikeya was bewildered and giggles in a childish manner. His mother Parvathi chides Kartikeya for his behavior. Repenting for what he has done Kartikeya performs penance to get rid of his sin in the form of a snake so that he would not be disturbed during the penance.

The place where Kartikeya did penance in snake form is known as Mopidevi. This place is in Andhra Pradesh near to Machilipatnam port. Kartikeya is worshipped in the snake form in this temple known as Subramanya.