“What is pure was, we do not touch. And what we do not touch, we call it taboo. She a menstruating woman was so pure  that she was worshipped as a Goddess. The reason for not having a woman go into a temple is precisely this. She is a living Goddess at that time.” – Pujya Sri Amritananda Natha Saraswathi

Sinu Joseph is a menstrual educator, author and one of the pioneers of the menstrual health movement in Bharat. Her work on menstruation has been unique in its efforts of unearthing the ancient science behind native menstrual practices and bringing forth a narrative which is the Bharatiya perspective on menstruation. A two-part interview with Sinu Joseph can be read here and here.

Rtu Vidya: Ancient science behind menstrual practices by Sinu Joseph is one of the most riveting books I’ve recently read. The book  has enabled me engage more deeply with my own decolonization. 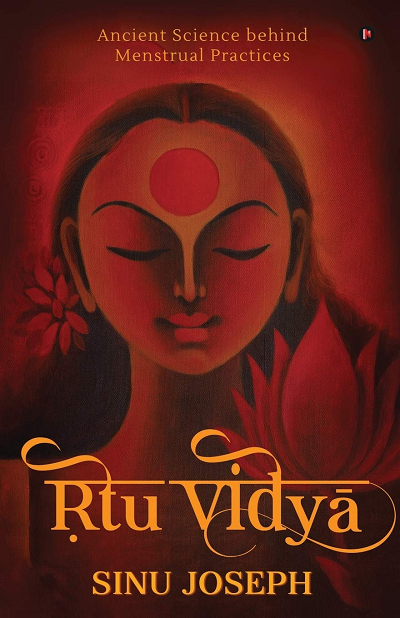 Rtu, in Samskrtam, refers to menstruation and vidya to knowledge. Hence through the evocative title, the author attempts to weave the warp and weft of various Bharatiya knowledge systems such as Ayurveda, Yoga and Tantra to create an intricate tapestry.

In doing so, she  demystifies menstruation and  clear away the cobwebs of misinterpretation and glossing over of the issue. She also addresses the several pitfalls  of ignoring the validity and relevance of situating menstruation in a cultural context.

Contextualising menstruation and menstrual practices honours, respects and validates the knowledge of the lived experiences and wisdom of the women of the culture in framing, claiming and owning their narratives through the inherent wisdom of their bodies.

Using the deft brush strokes of an insightful and perceptive seasoned artist, Rtu Vidya  is a sacred offering that traces the trajectory of  the author’s own journey of understanding the expression of menstruation as a core expression of being a female human. She does this through the lens of lived experience–pratyaksha pramanam or direct experience that is one of the modes of knowledge in Samkhya philosophy—both hers and her extensive interactions with women across the country.

The framework of this scholarly the engaging book  intertwines and interleaves science and religion—not  the hegemonic discourse of modern science, Western universalism and  colonial discourse but through a deep dive and immersion in the panoramic philosophy, science and religion of Bharatiya systems of knowledge and its similarities and parallels with other ancient knowledge systems such as Ṣaḍ-Darśana, Āyurveda, Tantra, Chakra, Yōga, Āgama Śāstra, Jyotiṣa Śāstra, and several sub-texts from these categories. As a result, the book goes beyond just describing cultural practices and takes a deep dive into explaining the scientific and logical reasoning behind the origin of these practices.

According to the author, the Bharatiya perspective on menstruation is based on  an all-encompassing understanding of a woman’s sthula sharira (physical anatomy) and sukshma sharira (subtle anatomy) and its interconnections with her environment. It understands menstruation as central to a woman’s overall well-being, and not just limited to childbirth. By understanding menstruation through this lens, enables women to  gain valuable insights into their overall health by observing their cycle, and take measures to prevent menstrual disorders and related health issues.

I find this and other refreshing perspectives an antidote to the toxic culture of stigma, shame, secrecy and silence around menstruation that inform dominant narratives of menstruation as linked exclusively to fertility and the several taboos that have spawned around this biological phenomenon. The book consists of two parts. The first part explores menstruation in science  and the second part looks at menstruation and religion.

In her earlier book Women and Sabarimala, Sinu Joseph highlighted the impact of sacred spaces on women’s reproductive health that has often been confused as a women’s rights issue, misogyny and patriarchy.

“As a race, we have been in deep slumber, forgetting that our culture and its many manifestations are not merely symbolic. Even when we mean well, we, at best, reduce a Hindu temple to a great architectural marvel! That a Hindu temple is a living space, imbued with prana, which can influence the human physiology, is hardly discussed, and perhaps, not even fully understood. For that understanding to happen, we must begin by accepting our own sciences as valid, and not trying to constantly reduce our knowledge to somehow fit into the limited lens of modern science.

The means of validating the truth as mentioned in the Bharatiya systems of philosophy such as the Darshanas needs to make a comeback, so that we can study and validate native sciences within their own framework. Unless this happens, it is but natural that we reduce a deep science and the knowledge contained therein to mere rights with the topping of misogyny and what not,” explains the author.

The book Ṛtu Vidyā emerged in search of answers to questions asked by adolescent girls and women in Bharat during the author’s interactions with them as part of the menstrual health workshops, conducted over a span of a decade across rural Bharat.

In an attempt to decode menstrual practices, she travelled across Bharat and studied various indigenous knowledge systems such as Ṣaḍ-Darśana, Āyurveda, Tantra, Cakra, Yōga, Āgama Śāstra, Jyotiṣa Śāstra, and several sub-texts from these categories. As a result, the book goes beyond just describing cultural practices and takes a deep dive into explaining the scientific and logical reasoning behind the origin of these practices.

“This book is for all Bharatiya women who have unanswered questions pertaining to menstrual practices; for menstrual researchers who will find a treasure trove of potential areas for research pertaining to menstrual health; for sportswomen to discover the ancient techniques employed by traditional martial art and dance that worked in sync with women’s periods and not against it; and also for the feminist who assumes that cultural practices around menstruation are a taboo that need to be done away with!” explains the author.

Personally, the thematic strands that are the highlight of the book are the need to use compatible lenses and frameworks when engaging with issues  because they are always context dependent and never context-free as many of us currently believe. It also foregrounds the pedastalization of modern science and Western modes of knowledge as inherently superior and universal. In doing so we unleash epistemic violence that  minimize, gloss over and erase native wisdom traditions at the altar of  homogeneity and Western universalism.

Rtu Vidya is a  powerful reminder to reconnect with our roots and ancient wisdom traditions and reclaim the wisdom of ancient heritage  with pride  and humility because such knowledge is part of our inherited wisdom that is  as ancient as the bhumi  (earth) in which it is grounded.