The Right Time for Dharma 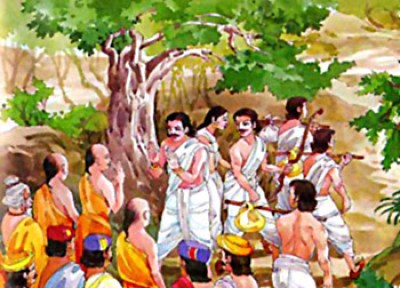 The great war had ended a long time ago. Yudhisthira had been crowned the chakravarti of the entire bharata khanda. Learning of the emperor’s desire, Maharshi Veda Vyasa had taken them to the remotest part of the himalayas and granted them immense wealth that was hidden there. The five pandavas performed the greatest of Ashwamedha yajnas ever done by man.

Each pandava had performed the yajna for three years! Hastinapura had seen the yajna being performed for fifteen continuous years! Every devata, rishi, pitru and nara had been satisfied in the course of the yajna. Dharmareturned to earth in full glory.

Yudhishthira had then installed a huge drum, a mahabheri, in front of his palace. He had announced to his citizens –

“Anyone who has any desire can come and beat this drum and seek his wish; I shall fulfil the same to the best of my ability”

Hearing this, one old brahmana, who was in urgent need of some money, proceeded towards the capital. Having travelled a long distance, he managed to reach Yudhisthira’s palace only late in the night. With great eagerness the old brahmana started beating the drum.

His sleep being disturbed, Yudhisthira got up from his bed and realised someone was calling his attention. He sent a few guards to enquire what the drum-beating was for. Soon, the guards returned to the emperor and told him an old man was seeking wealth for some personal use. Yudhisthira, being too drowsy, instructed his guards to send back the old man after telling him to come in the morning. He told the guards to assure the brahmana that his demands would be fully met.

Listening to the message from the King, the old brahmana felt disappointed and decided to test his luck with the yuvaraja. Bhimasena too, like his older brother, had installed a drum in front of his palace for the same purpose. The old man started beating the drum there. Bhima immediately came out and enquired what the old brahmana wanted. Listening to his demand, Bhima said

“It is late at night and the treasury is not open now; But fulfilling your ask cannot wait. Hence please take this”

Saying thus, he removed his precious bracelet and handed it over to the brahmana. Seeing that golden bracelet, studded with precious gems, the brahmana became supremely pleased and headed back to his village.

Bhimasena then proceeded towards the palace of Yudhishthira. Once there, he started to beat the mahabheri incessantly. Listening to the deafening sound of the drums, Yudhisthira got up, again, and was told that it was his brother this time beating the drums. Sensing that something unusual had happened, he sent guard after guard to enquire upon the reason.

The guards, after enquiring with Bhima, came back and repeated his words to the first pandava –

“I am extremely delighted at knowing my elder brother has definite knowledge about his longevity in spite of possessing a mortal body. Due to this certainty he sent away an old man, seeking help, and asked him to come back the next morning. He has postponed his dharma by a day. Only a man who knows he is alive the next day can do so. I am overwhelmed by joy that my brother is such a jnani. Hence I am beating this drum”

The moment Yudhisthira heard the reason, his face sunk out of guilt. He realised what a great mistake he had made. He rushed down to meet his brother. Embracing him, Yudhisthira thanked his wise sibling repeatedly and said he will never make the mistake of postponing dharma karya ever again.

Bhimasena smiled and consoled his brother. He said — “My intention was only to highlight your folly and bring you back on the right track again. Remember — when it comes to performing dharma, there never must be delay”

Yudhisthira was truly awakened by the upadesha of Bhima. His mind never deviated from the path of dharma from then on. He truly became dharmarajathen on.