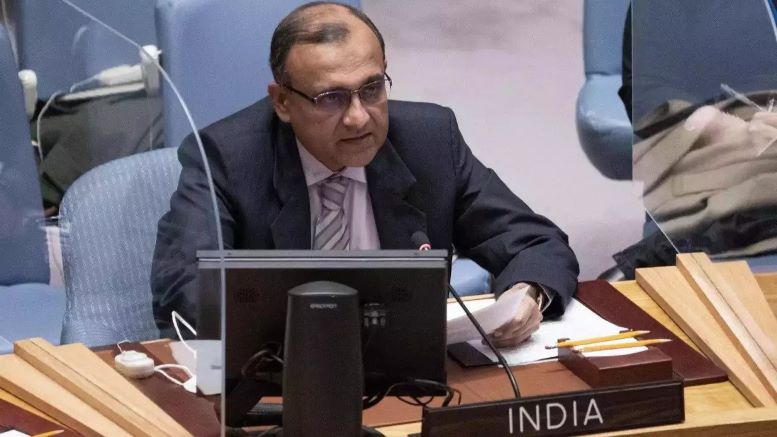 Bharat took a bold stand against religiophobia as the country’s UN Ambassador Tirumurti emphasized that religiophobia cannot be selective and asked the UN (United Nations) to address phobias against non-Abrahamic religions as well. He was speaking at an event to mark the first anniversary of the International Day on Countering Hate Speech titled ‘Role of education to address the root causes of hate speech and advance inclusion, non-discrimination, and peace’.

In this regard, Business Standard quotes Tirumurti as saying:

The emergence of contemporary forms of religiophobia, especially anti-Hindu, anti-Buddhist, and anti-Sikh phobias is a matter of serious concern and needs the attention of the UN and all Member States to address this threat. It is only then can we bring greater balance into our discussion on such topics.

Aberrations are dealt with within our legal framework and we do not need selective outrage from outsiders, especially when they are self-serving – even communal in nature, and pursuing a divisive agenda.

India has been the greatest victim of terrorism, especially cross-border terrorism. We call on countries to develop an education system that truly contributes to combating them by promoting the principles of pluralism and democracy.

A society based on pluralism, where every religion is respected, is a sine qua non of tolerance and harmony. India has embraced both these principles – democracy and pluralism. And we call on all countries to adhere to these principles to ensure that intolerance is addressed within a Constitutional framework.

Reacting to the adoption of the resolution, introduced by Pakistan, Tirumurti had said in the UN General Assembly that India hoped the resolution adopted “does not set a precedent” which will lead to multiple resolutions on phobias based on selective religions and divide the United Nations into religious camps.

Hinduism has more than 1.2 billion followers, Buddhism more than 535 million and Sikhism more than 30 million spread out around the world. It is time that we acknowledged the prevalence of religiophobia, rather than single out just one.

It must be pointed out that the UN General Assembly adopted a resolution earlier this year proclaiming March 15 as the International Day to Combat Islamophobia. At that time, Bharat had raised concerns about phobia against Islam alone being raised to the level of an international day while adding that phobias against Dharmic religions are on the rise. Bharat spoke of growing contemporary forms of religiophobia particularly anti-Hindu, anti-Buddhist, and anti-Sikh phobias.

It must also be highlighted that while Bharat is often times targeted for its ‘treatment of Muslim minorities’, the international community ignores the persecution of Hindus. It is, therefore, essential to bring out the systematic Hindu hatred that has come to the fore, be it in Islamic nations or in America or Europe. This is a good first step in that direction.