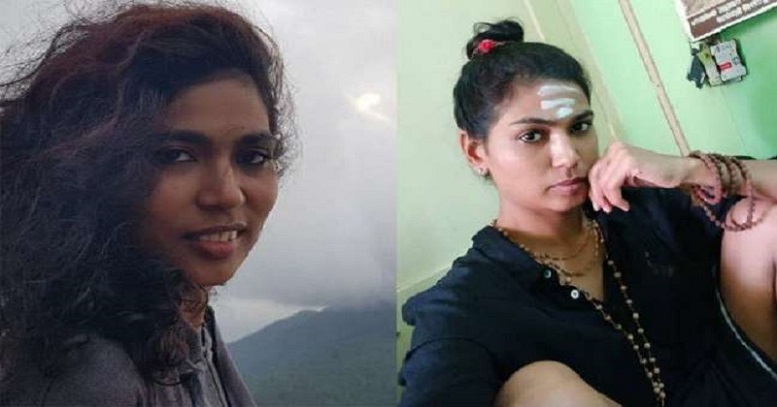 Rehana Fathima, the controversial darling of the Communists in Kerala, has been granted partial relief by a Supreme Court bench headed by Justice RF Nariman. The SC stayed the Kerala HC order totally barring Fathima from posting anything on social media, but directed that the prohibition on her spreading any comment that may affect religious sentiments will continue.

The case pertains to a cookery video of hers captioned ‘Gomatha Ularthu’ that was uploaded on Youtube last May. On it, an apparently topless Fathima is seen stir-frying meat which she repeatedly refers to as ‘Gomatha’ i.e. ‘Mother cow’, a term used by Hindus as they consider the cow a sacred and dear animal. ‘Ularthu’ in Malayalam means ‘stir fry’ and usually refers to beef stir fry.

The sequence of incidents shows that she is a serial offender and highlights the insensitivity of our courts towards Hindus. In 2018, she was arrested after uploading derogatory remarks about Bhagwan Ayyappa. Back then, she had intentionally uploaded semi-nude photos while posing as a brahmachari (celibate). She had also tried to force her way into Sabarimala temple accompanied by a large posse of policemen provided by the CPM government.

She got bail in that case from the Kerala High Court (HC) on the condition that “she shall not directly or indirectly or through any other person, through print, visual or other electronic media, make, share, forward, disseminate or propagate any comment, which may affect or has the propensity to affect, the religious feelings or sentiments of any community or group or society”.

She was out on bail in that case when she went ahead and uploaded her Gomatha video on Youtube, last year. While hearing a petition that sought to recall the bail given to Fathima for this latest act of bigotry, Kerala HC Justice Sunil Thomas, ruled that it was a serious violation likely to wound the religious feelings of Hindus and that “Choice of the word ‘gomatha ularthu’ prima facie appears to be ill-motivated and purposefully made and that uploading of such a highly objectionable video for public viewing may affect the fundamental right of the devotees”.

While Judge Thomas agreed that a natural consequence would be to cancel her bail, he was “inclined to give her one last opportunity” on the belief that she will start recognising the rights of others. But he laid down the condition that she would not publish, transmit, share, or upload any material on visual/ electronic media till trials in all cases (she has other cases too registered against her) are over.

Next, in June 2020, Fathima posted a video of her two minor children, a boy and a girl, painting on her semi-nude body, claiming that she wanted to ‘teach them about womanhood and desexualise the female body’. A case under POCSO was lodged. After being denied anticipatory bail by HC, she approached SC which too rejected her petition slamming her for spreading obscenity and using her children for such acts. Later she surrendered to police, but was granted bail by a POCSO court in a few days.

This time around, she had appealed the SC against the HC order barring her from using social media in toto. And the bench headed by Justice R F Nariman granted her partial relief by allowing her to post on social media, as long as it doesn’t affect religious sentiments. Incidentally, Justice Nariman had recently also given bail to ‘comic’ Munawar Faruqui who is accused of hurting Hindu sentiments with his show in which he denigrated Bhagwan Ram and Maa Sita among other things. Nariman said that Faruqui’s arrest did not ‘follow procedure’, and also granted him protection from being arrested by Uttar Pradesh police in a separate case. Madhya Pradesh HC had earlier denied bail to Faruqui and 4 others accused.

Incidentally, while the prime accused Faruqui became a cause célèbre for the Lutyens media and intelligentsia, with desperate op-eds appearing daily in English-language newspapers on his behalf, the other 4 accused – 3 Hindus and 1 Christian – hardly got any attention and are still in jail.

Rehana has a history of anti-Hindu tirades and is a pro-communist activist masquerading as a women’s activist. Communists, in turn, use her when needed and dump her in times of difficulty. Let us take a look at her history.

She was working as a telecom technician with BSNL when she burst onto the scene with nude photographs of herself covering her bare breasts with watermelons. This was in response to an Islamic fundamentalist professor’s tirade against Muslim women wearing the hijab ‘improperly’.

She was also seen amongst the ‘Kiss of Love’ activists who were protesting against alleged moral policing. What followed was obscenity on the streets, with activists hugging and kissing strangers in the streets and posting photographs on social media. The involvement of members from the LGBT community and the vulgarity quickly drew criticism from all sections of society. It later became clear that many so-called activists were soliciting sex under the garb of activism.

She then wanted to visit Sabarimala and started dressing up in black. That is when she shot obscene semi nudes of herself and updated the same on social media. The police escort that she enjoyed while attempting to reach the temple smacked of complicity from the ruling communist top brass. Though the devotees prevented her from reaching the temple, the price many had to pay was enormous. They were beaten up black and blue, jailed and many still run around courts following summons and legal rigmarole.

The BSNL on its part terminated Rehana from its rolls following the negative publicity, though it didn’t make much of a dent in her progress up the activist hierarchy. She was in the limelight yet again recently when she posted videos of herself lying semi-naked and making her two children paint over her body. That the incident brought her under the ambit of POCSO and her anticipatory bail pleas were denied both by HC and SC, yet she manages to roam freely speaks volumes of her influential connections in politics and judiciary. One thing we can rest assured of is that this is not the last of ‘activist’ Rehana Fathima that we will be seeing or hearing.

For the ordinary Hindu, it is hard to fathom why our judiciary is being so lenient with a repeat offender like Rehana Fathima. To assume that the judges found nothing intentional in something that even a layman understands about her intentions is puzzling, to say the least. It was pretty evident when she mentioned ‘Gomatha’ repeatedly in her cooking video that her intent was to mock and hurt Hindus.

Would the courts take the same position if a Hindu person had insulted the beliefs of the Muslim community by posting derogatory videos about Muslims eating pork etc? Or would Section 153 (wantonly giving provocation with intent to cause riot) automatically come into play there as riots would surely follow? Are our courts indicating that they take those with proven violence potential more seriously?

That Fathima was defended in court by left-liberal ecosystem lawyers like Colin Gonsalves (ties to Harsh Mander, foreign Christian missionary orgs like Misereor) and others close to the Congress first family brings to light the complicity and the nexus between the Communists and the Congress. The question also arises as to how an ordinary ex-employee of BSNL could afford lawyers who charge lakhs per sitting? It is pertinent to note the speed at which such cases reach the Supreme Court while disputes of colossal value to Hindus like the Ayodhya case take decades to get resolved.