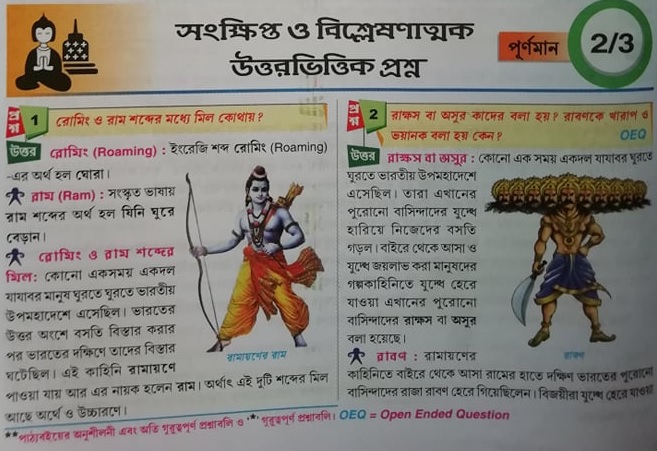 Many netizens were shocked when a Twitter user pointed out that the school books of West Bengal have been indoctrinating the malleable minds of children with fallacies of the worst kind. As per the tweet, a textbook of standard 6th included in the syllabus of West Bengal state board teaches children that Bhagwan Ram was an ‘invader from a foreign land’. And as he came to Bharat while roaming around, the English word ‘roam’ originated from the phonetically similar ‘Rama’. Ravan, as mentioned in the book, was a ‘native’ of Bharat, and these natives were portrayed as Rakshasas (demons) in the Ramayana.

The magnitude of damage such misinformation is capable of doing is inexplicable. Hence we decided to dig deeper and ascertain the veracity of the tweet, and discovered that the claim of the Twitter user is true.

The screen-grab shown in the above tweet is from a reference or exercise book that helps in studying the state board’s standard VI textbook, “Atit O Aitijya”. The creative-in-charge and editor is one Shirin Masood. 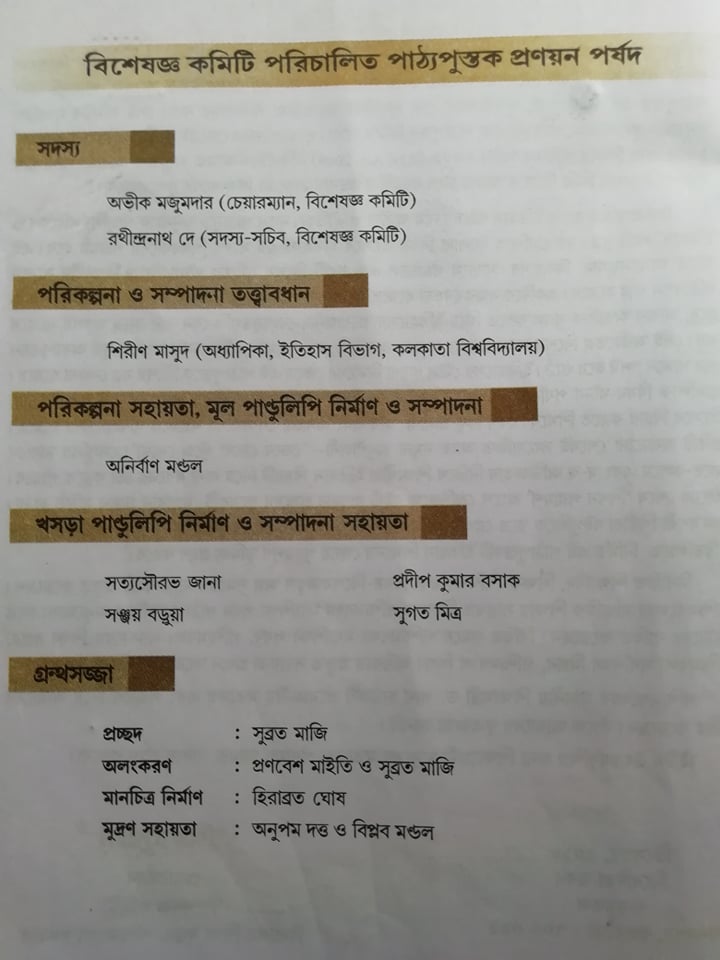 The textbook insinuates that the Ramayana is neither true history nor factually correct, and seeds doubts in the minds of 12-year-olds against the epic’s status. Bengali Hindu children are systematically poisoned against Bhagwan Ram through this book that explains him as a ‘foreigner’ who reached Bharat while ‘roaming around with his troops’. His ‘adventures’ lead to conflicts with the locals, and whoever wins the battle writes the history from his point of view – in such recorded texts, the defeated party is shown as monsters, the textbook says.

The Ramayana is one such piece of text that chronicles the battle between Ram and Ravan; Ravan was the ‘native’ and the victorious side presented him as a monster in Ramayana, the book claims. The chapter states that both Ram and Ravan were human beings, but Ravan was portrayed as the ‘bad guy’ as the Ramayana was recorded by the winning side led by the ‘invader’ Ram. Further, the chapter teaches another lie that in Sanskrit, the word ‘Ram’ translates to ‘the one who roams around’.

This is a clear attempt to distort Hindu Dharma and it’s itihas, by linking the Ramayana to the debunked colonial era Aryan Invasion Theory (AIT) which posits that Hindus are invaders from Central Asia who subjugated the native moolnivasis. AIT is a favorite of Christian evangelicals & Islamists who use it to break tribals, Dravidians and poor Hindus away from the Hindu fold and, ironically, lure them to Abrahamic faiths that originated in the deserts of Middle East and which have a dark history of genocide, slavery and utter destruction of indigenous religions and cultures across the world.

Disconnecting urban Bengali Hindus from their Hindu roots has been going on for a long time now. Such lies percolated into the minds of Hindu children through the textbook edited by Shirin Masood are preparing West Bengal for a generation of even more self-loathing Bengali adults in some 10 years. The over three decades of communist rule in the state from 1977-2011 has done enough damage to Hindu Dharma, and the current “Bengali Nationalist” government that aligns more to Bangladeshi Islamists than rest of Bharat doesn’t augur well for the future of Hindus in this land of Swami Vivekananda, Ramakrishna Paramhansa, and Chaitanya Mahaprabhu either.

While we have been keeping you abreast of the ineffectiveness of the state police and the gross negligence in the state’s health ministry, the depravity in West Bengal’s education system has not been any less. This is not the first time that anti-Hindu changes in the education system have shocked us.

The education system of the state has been undergoing Islamization for many years. Back in 2017, the Mamata Banerjee government introduced the Urdu word ‘Asmaani’ in the 7th standard book, Barnali, to describe the ‘sky blue’ color. The Bengali language already has a word for that color: ‘Aakashi’. What motivated the education system to toy around with the language of the land?

The same year, to enforce secularism, Mamata Banerjee had replaced the Bengali word for rainbow, “Ramdhanu” with “Rongdhanu”, as the former containing the expression ‘Ram’ was ‘detrimental’ to her secular image.

Back in 2014, the state government drew major backlash for terming great freedom fighters like martyr Khudiram Bose, Jatindranath Mukherjee, and Prafulla Chaki as ‘terrorists’ in a class 8 history textbook. And now they have decided to distort one of the most sacred Hindu icons, Bhagwan Ram.