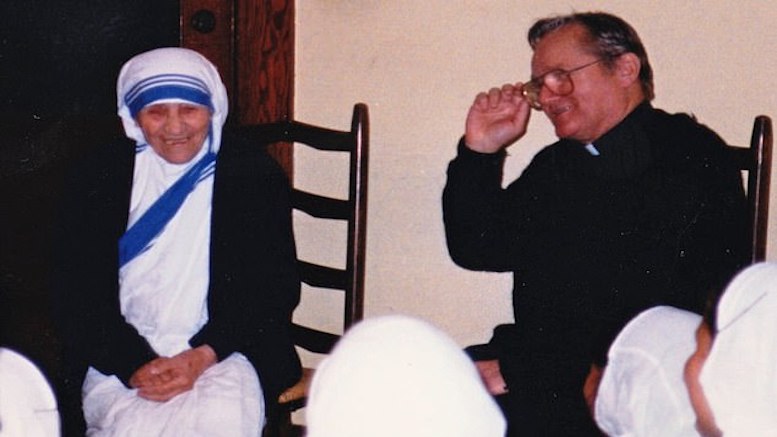 A prominent Jesuit closely associated with ‘Mother’ Teresa has been accused of sexually abusing a young boy, who served him as a ‘child valet’, over 1000 times, AP News reports. The accused Jesuit priest, Rev. Donald J. McGuire, was sentenced to a 25-year prison sentence in 2009 for child sexual abuse and passed away behind bars in USA at age 86 in 2017.

The lawsuit filed by Robert J Goldberg who served as a child valet for McGuire accuses him of subjecting Goldberg to sexual abuse “more than a thousand times in multiple states and countries during their spiritual retreats across Europe and America”.

Goldberg’s association with McGuire began in May 1970, as an eleven year old who was given a ride home, along with his disabled sister, by McGuire; a ride that would change his life forever and one that he regrets taking. The Jesuit exercised such a powerful hold over Goldberg that the latter even testified on his behalf when the priest faced criminal proceedings for child sexual abuse. He was finally convicted in 2006 for sexual abuse of two boys and sentenced to 25 years imprisonment.

Goldberg has stated that he has been able to shake off the stranglehold of the priest and has, therefore, come out in the open about the abuse he faced at the hands of the Jesuit during their trips. The one time defender of the priest arrived at this decision after meeting up with Tyrone Cefalu, another ex-employee and ex-defender of the abusive Jesuit. Cefalu spent six years working full time to find information that would discredit those who came out in the open accusing the priest. Cefalu and Goldberg have said that McGuire was so convincing and overpowering that it was difficult to refuse to do his bidding.

The lawsuit says that Goldberg’s abuse occurred at a time when powerful church officials – including ‘Mother’ Teresa, who was elevated to ‘sainthood’ by Pope Francis three years ago – knew that McGuire had been repeatedly accused of sexually abusing boys. Church officials went to great lengths to cover up his crimes, the suit alleges.

Goldberg suffered sexual abuse at the hands of McGuire right from the time the latter ’employed’ him as a child. Since he was from a poor background, the $300 to 500 per week, paid by the priest as Goldberg’s ‘salary’ helped his single mother tide over their difficulties. Rebelling or refusing to indulge in sex invited Maguire’s ire and punishment of being locked up in a room for hours together. Goldberg has also revealed that sex was often used as a punishment. He recalls that once when he caused damage to the priest’s car, the latter made him pay for it by indulging in a variety of sexual acts.

By 1976, McGuire moved to San Francisco to teach at the University of San Francisco, a Jesuit-Catholic institution, and Goldberg followed him along with his family. It was around this time that McGuire came in contact with Teresa and became her spiritual adviser. He acquired veto powers over the nuns wanting to join Teresa’s Missionaries of Charities.

Accusations of sexual abuse endured by boys began as soon as McGuire was ordained as in 1961 and it was brought to the attention of Chicago Province of Jesuits (part of Midwest Jesuits at present). Even parents of boys had written letters to Church authorities but such complaints were not heeded to. Attorney Marc Pearlman, who represents many victims, has said that documents relevant to criminal activities have been destroyed by the authorities.

The first criminal complaint against the Jesuit was filed in 1969 and since then accusations kept pouring in for the next half century till McGuire was finally convicted and sentenced.

Each time the Jesuits received complaints that McGuire was sexually abusing boys, they would move him to another post, where he would continue his predatory behavior. Even after a psychiatric evaluation showed McGuire was sexually attracted to underage boys, the Jesuits continued to insist he was a priest in good standing, in part due to the urging of ‘Mother’ Teresa.

In a letter dated February 2, 1994, after McGuire had been released from a residential treatment center, the future saint wrote to the leader of the Chicago Jesuits, saying she had received a letter from McGuire and believed that the accusations lodged against him were untrue.

‘I have confidence and trust in Fr. McGuire and wish to see his vital ministry resume as soon as possible,’ she wrote. Teresa got her wish, and McGuire continued his world-wide ministry, ‘openly traveling with young boys as his companions,’ according to Goldberg’s lawsuit.

That he continued to remain in positions of authority despite several complaints clearly points towards the complicity of Church authorities. This pattern of Church hierarchy covering up for paedophile and sexual abuse accused priests has repeated itself in case after case, cutting across Christian denominations, including in Bharat. Many a time, even when a paedophile priest confesses his crime to a colleague or senior, the confession is kept secret from law enforcement and the offending priest is merely told to ‘pray for forgiveness’.

In Australia, Catholic priest Michael McArdle, after pleading guilty in court to sexually abusing children, made an affidavit in 2004 stating that he had confessed 1500 times to molesting children to 30 priests across 25 years. After being forgiven 1500 times for his regular criminal offending in face-to-face confessions with his fellow 30 priests, he was told to “go home and pray”.

Jesuits are members of the Society of Jesus, a religious order of the Catholic Church headquartered in Rome, founded in 1540 by Ignatius of Loyola, a nobleman with a military background. Their founding document invites “whoever desires to serve as a soldier of God to strive especially for the defence and propagation of the faith.”  Jesuits mainly work in education and research.

Francis Xavier, one of the original companions of Loyola, arrived in Goa, in Portuguese India, in 1541. In a 1545 letter to John III of Portugal, he requested an Inquisition to be installed in Goa (Goa Inquisition). Jesuits runs several colleges in schools in Bharat such as XLRI, St. Xavier’s, St. Joseph’s, Loyola etc. In 2013, Pope Francis (Jorge Mario Bergoglio) became the first Jesuit Pope.

At present the lawsuit does not contain the names of any defendants but Goldberg’s lawyers have revealed that Jesuit religious order in United States and its top leaders in Rome would be named along with several others. According to the attorneys, the abuse took place at a time when powerful Church authorities, including Teresa who was later bestowed with sainthood by Pope Francis, were not only fully aware that McGuire had been time and again accused of sexually abusing boys but they also went to great lengths to defend him by brushing his crimes under the carpet.