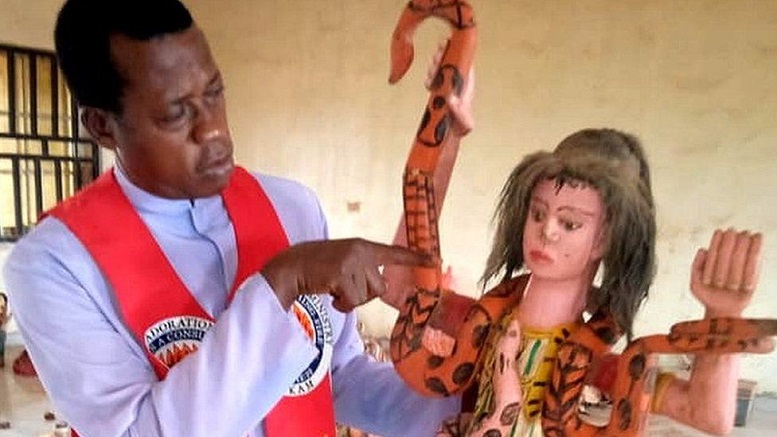 A recent Reuters report has mentioned how a Nigerian priest, himself a Roman Catholic Christian, has been ‘saving’ pre-Christian religious artefacts from Christian converts who were planning to burn the artefacts.

The collection includes carvings of pagan deities and masks, some of them more than a century old and considered central to the pre-Christian religion of the Igbo people, who traditionally believed them to be sacred and to have supernatural powers.

… The collection is being housed in a museum in the compound of his Saint Theresa’s Catholic Cathedral, in the city of Enugu.

As mentioned in a previous post, Christianity and Islam have decimated traditional religions in the African continent. In Nigeria, Christianity (led by Pentecostal churches) is the dominant religion and converted Christians are indoctrinated into believing that these artefacts are linked with “evil spirits.”

Such a modus operandi sounds familiar as Bharat too has been experiencing relentless missionary activity in different parts of the country, with evangelical Protestant groups like Pentecostals, Baptists, Seventh-day Adventists and other Christian cults started by self-declared holy men leading the charge.

The priest saving the artefacts, Reverend Paul Obayi says that these are just “cultural artefacts” and the aim is to preserve the local cultural heritage.

Some local experts however do not believe that the objects are merely cultural and consider them to have supernatural powers.

Akinmayowa Akin-Otiko, research fellow, Institute of African and Diaspora Studies at the University of Lagos said that, in his experience, it was not easy to completely neutralise the artefacts’ reputed supernatural powers.

“I think he is keeping history, he is telling a story, but I am also wary because of my experience, because of my knowledge, those things don’t go away easily,” said Akin-Otiko.

The report on the artefacts also includes a video that was shared in a tweet on the report. This is how the Christian West has decimated indigenous traditions and religions in continents of Europe, Africa, North and South America, and Australia. After massacring or converting the native populations, the colonial West morphed into saviors of the indigenous cultures and displayed native artefacts in their museums, as a token gesture towards ‘celebrating world civilizations’.

By assuming the mantle of the originators and bearers of universal truths – both sacred and secular – the West has often embarked on and justified programs, missions and schemes to bring the rest of mankind around to it’s own worldview. I use the metaphors of “tiger” and “deer” to illustrate the process of what I call the “digestion” of one culture by another, carried out under the guise of a desire to assimilate, reduce differences and assert sameness. The key point being made is that the digested culture disappears. This digestion is analogous to the food consumed by a host, in that what is useful gets reformulated into the host’s body, while that which doesn’t quite fit the host’s structure is eliminated as waste.

Just as the tiger, a predator, would, the West, a dominant and aggressive culture dismembers the weaker one – the deer – into parts from which it picks and chooses pieces that it wants to appropriate; the appropriated elements get mapped onto the language and social structures of the dominant civilization’s own history and paradigms, leaving little if any trace of the links to the source tradition. The civilization that was thus “mined” and consumed gets depleted of its cultural and social capital, because the appropriated elements are then shown to be disconnected from and even in conflict with the source civilization. Finally, the vanquished prey – the deer – enters the proverbial museum as yet another dead creature (i.e. a dead culture), ceasing to pose a threat to the dominant one.