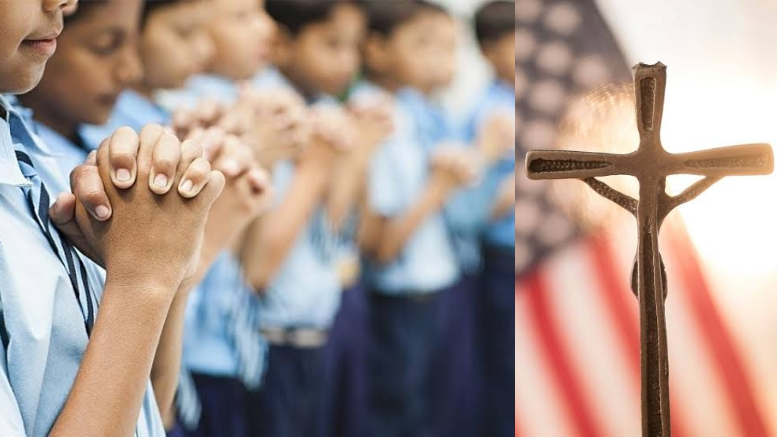 An investigation report by News 18 media has revealed shocking details about rampant conversion in the DMK ruled Tamil Nadu. School children are told that Hindus are Satans and that only by praying to Jesus they can score good marks.

A few weeks ago, the news of a Hindu girl from Kanyakumari complaining that her teacher asked Hindu students in the government school to read the Bible and called Hindus as Satan went viral. News 18’s Tamil bureau had reported the incident first. Following that there have been other instances from other parts of the state about proselytisation in schools including government ones.

News 18 reportedly conducted an investigation among school children about the rampant conversion activities going on in both government and private institutions. It revealed that even tuition centres have become conversion centres. An 8th grade student from Tirunelveli was told that to score good marks and perform better than his classmates he must pray to no other god but Jesus, it reported.

The boy told News18 that his teachers frightened him that if he doesn’t pray to Jesus he will fail in his life and his body will be deformed. Following the incident the boy’s father changed him to another school as school management took no serious action against the teacher. “School is not a place where we send our children to learn how one religion is better than others. This creates hatred”, he told News18.

A 14 year old girl narrated about similar experiences in her school. She said that her teacher taught everyone in her class that “Hindus are Satans. You will only get misery if you do not pray to Jesus. One must use a Bible while praying if they wish to be successful in life”. When her dad and a few other parents took the matter up with the school administration they were assured that it will not be repeated. But no serious action was taken on the teacher.

Another small child of 3rd grade said that she and some other Hindu kids were asked by her tution teacher to come for prayers. When the kid told that her parents would not allow her, the teacher insisted that she must pray to Jesus. She told another boy that if he wants to score good marks he must attend the prayer session.

Apart from state owned, government aided, private schools and tuitions, even moral science and value added classes are used to proselytise and brainwash young minds. Dheiva Prakash who runs a school in Nagercoil told the News18 team that missionaries enter the school premises claiming to be educationists.

“They would offer the school administration to give students lectures on ‘uses of cell phones’ or ‘misuses of technology’ or on moral science. But as we have been told by students, these lectures slowly graduate to preaching on prayers, the importance of one particular religion and how to pray to god and on how other religions are bad. This is complete brainwashing of a child as young as 8-9 years old”, he said.

Umayoru Bhagan, a retired professor and educationist, said “Since targets for conversion are selected as per one’s needs, the allurements by the groups that approach these people are so strong that one easily falls prey to them. In the recent past we have seen that more and more schools are being approached. Students can’t be told they will do better academically if they follow one particular religion”.

Will the Government Act?

Many activists and educationists have expressed alarm over a drastic increase in such activities and have called upon the state government to curb them. However it has fallen on deaf ears. But then it is not surprising as the CM himself admitted in the Church of South India’s foundation day function that the government was formed by them (Christians). He appointed a Jesuit priest as a member in the State Public Service Commision. He also appointed a rabid Hindu hater, Leoni, as the Chairman of TN Textbook Corporation.

Fr.Joe Arun, Director of the well-known Loyola College of Arts and Science in Chennai, had included Jesuit preachings in text books when he was part of the Textbook Corporation’s team to revise school books. It is to be noted that when Lavanya, a 17 year old Hindu girl killed herself unable to bear the physical and mental torture for refusing to convert, the DMK government supported the Christian school and the perpetrators by going out of its way to demonise the child and her parents.

High profile ministers, including the School Education minister, told the media that there is no conversion angle in the case and that they have video recordings from her classmates to prove it. In fact, Trichy DMK MLA Inigo Irudaya Raj felicitated one of the accused nuns when she came out on bail. It should also be noted that the place where Lavanya was made to stay was not registered as a hostel but as a ‘Child Care Institution’ aka orphanage. It received funds directly from the Vatican to “propagate Christianity”.

The NCPCR team headed by Chairman Priyank Kanoongo found that the orphanage’s license had expired and wasn’t renewed. Despite these findings no action was taken on either the school or the so-called “hostel”. So it is futile to expect that the state government would listen to the voices from the ground and take action against rampant conversion activities in educational institutions. But it is time for the child rights agencies and the centre to step up and fulfill their responsibility.

Pastors target children and tribals with biryani and Bible in TN