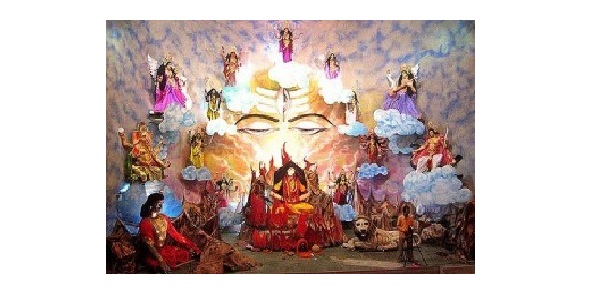 Like so many other terms relating to discussion on Hindu Dharma, monotheism is not properly defined.  It means different things to different people like the six blind men who are asked to describe an elephant.

Let me make an effort to give my definition.  And also what I think are some of the problems with monotheism.  I am basing my remarks on the teachings of Ram Swarup and Sita Ram Goel.  These are not my original thoughts.

Monotheism means that there is one unique way to truth or salvation. Any other way would lead to hell.  Monotheism also implies a single life – that is, no reincarnation.  So either you go to heaven or, as Swami Vivekanand so delightfully described, that place where one is eternally barbecued.

A single life concept means that one needs to be sure that one is following the unique way.  Mistakes are not allowed.  But how does one know for certain that one is following the unique way?  This is where the clergy comes in, because there is a claim that the clergy knows best.  The clergy then has a power over the person, since the clergy can make or break a person.  In some ways this dilemma was attempted to be resolved by the mathematician Pascal, as explained in Pascal’s wager.

This wager says that one can bet on whether God is, or God is not. If you bet on God IS, and you win, you go straight to heaven after you die. If not, then there is no gain or loss, since an absence of God also means an absence of both hell and heaven.  If you bet on God IS NOT, and you lose (meaning that God is), you go straight to hell after dying. If you win, then no gain or loss. So, Pascal concluded, it is best to bet God IS, and blindly follow the clergy. (In business we call this a theory of downward risk – if the cost of failure is huge, even a small probability of failure makes one reluctant to take the risk.)

In the nature of things, the power that the clergy has, is invariably misused by the clergy – it would be a surprise if it was not. One of the misuses was the concept of indulgence in the Roman Catholic Church, where one pays the Church to reserve a place in heaven, and then leads an immoral life on earth.

The second problem with monotheism is that there are many religions that claim to be monotheist.  And this is where Pascal’s wager fails. Because one has to know which of the many supposedly unique Gods does one bet on. You cannot bet on all of them, because each God is supposed to be unique, and betting on all actually means betting on none.

I think readers know of the other problems with monotheism.

Our ancient sages were seized of the problem, and thought over it deeply. At an intellectual level, they said it is just not possible that there is a unique way to truth.  Each person would like to experiment and think for himself/herself.  But experiments also imply a possibility of failure.  In which case, experiments can be encouraged only when there is a concept of reincarnation – that is, a soul cannot be eternally damned.  The soul should have an opportunity to correct the mistakes made in an earlier life.  God cannot be so cruel as to condemn a person to eternal damnation, particularly when the person has been a good human being otherwise.

In this way, the sages said “Ekam sat, viprah bahudda vadanti”. Each person is permitted to create his/her own path to truth. He/she can take guidance from a guru – but the guru cannot be held responsible for the path chosen by the individual. The person has to dwell on the guidance given by the guru and work out the path that is best for him/her according to the person’s environment and unique conditions. And if he has made a mistake, then the soul comes back.

Since each has a unique path to truth, each person will accept that while another’s path is not suitable for oneself, that path may well be right for the other person. This is the essence of tolerance.

Now, given this highly evolved intellectual process, why did the Brahmo Samaj, in the early 19th century, project that Hindu Dharma is also monotheist? My opinion is that it was a matter of strategy, to counter the effort for conversion by the Christian missionaries around Kolkata.There was an urgent need to respond to the simplistic projection by the Christians that since the Hindus have so many gods, they are a confused lot. The strategy of Brahmo Samaj did have an effect of further confusing the Hindus who were getting attracted by the apparent certainty of Christianity. They said that since Hindu Dharma was good for so many of their generation, let us just wait for some more time to know what exactly is correct. This gave an opportunity for people like Ramkrishna Parmahans to come and guide the Hindus to reject the apparent certainty of Christianity.

But the image of polytheism as being inferior to monotheism was sustained by the Christian churches through various means. And today, it is generally felt by people at large that monotheism is morally superior. It is this dilemma that the Hindu parents in California were confronted with when it came to the revision of the Hindu Dharma text books. Do they try and explain what exactly is meant by monotheism and polytheism, or do they just try and create another term, monoism, so that they do not have to say that Hindu Dharma is monotheist, which it obviously is not?

Again as a strategy, I think the California parents were correct. They were dealing with textbooks for children around 10 years old, and taking a course which does not count towards their grades. The children will be spending just a few hours during the year on the subject, and will answer the tests by taking one sentence from the textbook from one place, add another sentence from another place, to make it look like a different paragraph than what the text books say, without being accused of plagiarism! And when the paper is handed over, make serious effort to wipe out the knowledge they have put in their own memory.

The task of explaining what monotheism and polytheism means, is to be taken up at the post-graduate level.  I think here too there is very little challenge of the implicit assumption that monotheism is superior to polytheism.  And I find that there is a great deal of reluctance at this level to tackle the issue – even amongst those who have an empathy for Hindu Dharma.

My conjecture for the reluctance is that if it is done, then the logical conclusion is that polytheism is better than monotheism; and that instead of thinking of Hindu Dharma as something inherently bad, the monotheist faiths have to be considered to be inherently bad. A whole scholarship based on a house of cards will collapse.