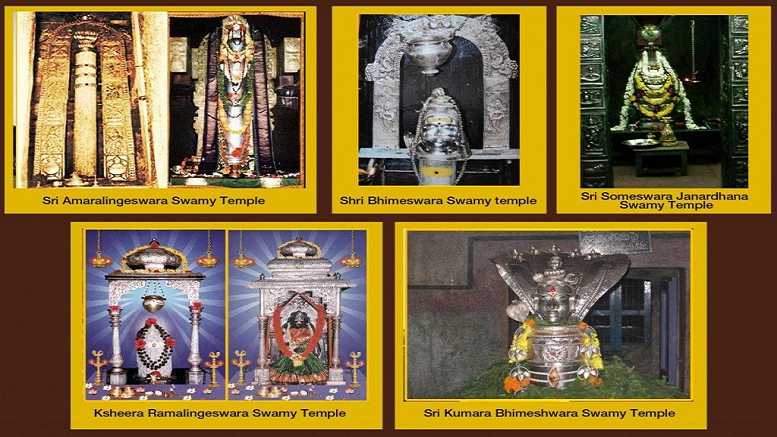 During the war between devas and asuras, Bhagwan Kumarawsamy smashed the shivalingam worn by the Tarakasura (asura king). The shivalingam broke into 5 parts and fell on the earth.

Then, Bhagwan Vishnu advises Kumaraswamy to immediately consecrate these five parts into the earth at the respective places where they have fallen. He cautioned Kumaraswamy that those five parts will rejoin and form the shivalingam once again and then it would be difficult to kill the demon Tarakasura.

Amaravathi, Draksharamam, Bhimavaram, Palakol and Samalkot are those five sacred places of worship that are located In Andhra Pradesh.

The Shiva temple in Amaravathi is on the banks of the Krishna River in the Guntur district of Andhra Pradesh. This town is also popular for 95 feet Buddhist stupa that has beautiful carvings depicting the life of Goutama Buddha and archaeological museum.

Bhagwan Shiva in this temple is worshipped as Amaralingeswara Swamy in 15 feet white marble shivalingam. It is said that the shivalingam was growing in its size and to stop its growth a nail was hit on top of it after which it stopped growing further. One can see a red stain on top of the shivalingam that symbolizes the blood stain.

This temple is also known by the name Amararamam.  Amaravathi town was the capital of Sathavahana kings who ruled between 2nd and 3rd century AD. Amaravathi is 33 Kms from Guntur and 19 Kms from Vijayawada.

Draksharamam in East Godavari district in Andhra Pradesh is located at a distance of 28 Km from Kakinada and 50 Km from Rajahmundry on the bank of the river Godavari. Bhagwan Shiva’s consort the Devi Manikyamba at Draksharama is one of the 18 shakti peethas. It is believed that the left cheek of the Devi Sati fell here when Bhagwan Vishnu cut her corpse of into 51 pieces after her self-immolation at Daksha Yagna.

The archeological evidence of this temple dates back to 13th century. Bhagwan Shiva is worshipped as Bhimeswara Swamy in this place.

Bhagwan Shiva in this place is known as Someswara Swamy. During 4th century AD, king Chalukya Bheema played a key role in the construction of this temple. The shivalingam installed by Chandra Deva changes its colour on full moon day and on new moon day.

Bhimavaram town, west Godavari district is located around 57 Kms from Rajahmundry and 85Kms from Kakinada. Bhimavaram is also connected by train route. This temple is also known by the name Somaramam.

Bhagwan Shiva at this place is known by the name Ksheera Ramalingeswara Swamy. The temple stands at 120 ft height and said to be constructed during 9th century AD by Chalukya kings. There is a mandapam in the temple made of 72 pillars in black stone. The temple tower in this place is one of the tallest in Andhra Pradesh.

Palakol is located around 23 KMs from Bhimavaram. Palakol is having train connectivity. This temple is also known by the name Ksheeraramam.

Samalkot, East Godavari District is located at a distance of 12 km from Kakinada, 52 Km from Rajahmundry. The temple of Kumaram Chalukya Bhimesvara was constructed by the famous Eastern Chalukya king Chalukya Bhima-I towards the end of the 9th century AD. The shivalingam in this temple is made of lime stone and it is very tall and occupies up to two floors of the temple.

Samalkot is on the Chennai – Howrah broad gauge railway line of South – Central Railway. This temple is also known by the name Kumararamam.