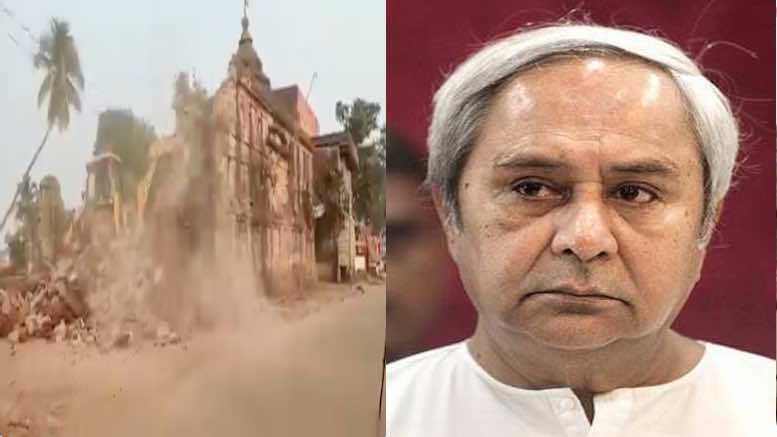 In yet another illustration of the cultural illiteracy or selective malice which the secular Indian state suffers from, a painful video has emerged from Odisha. The video shows government authorities in Bhubaneshwar, Odisha demolishing Gopal Tritha Matha, a Hindu monastery, as part of the ongoing ‘beautification’ drive in the vicinity of the Lingaraj temple.

The Gopal Tritha matha supplies the requirements for the Hativesha of the deities, Sri Jagannath, Balabhadra and Subhadra during Snana yatra, as mentioned in an Odisha government publication titled ‘The Mathas of Puri’.

The bathing festival or Snana Yatra is a special bath when the three deities are taken from the sanctum sanctorum to the bathing altar (Snana Vedi) on the outer complex of the 12th century Sri Jagannath temple in Puri. It takes place on the Purnima (full moon) of Jyestha month to commemorate the appearance day of Sri Jagannath. According to Skanda Purana, when Raja Indradyumna installed the wooden deities, he arranged this bathing ceremony which is considered to be the birth-day of Sri Jagannath.

After the bath, servitors deck up the deities in ‘Hati Vesha’ (elephant dress) which signifies manifestation of Sri Ganesh.

Odisha government has launched the ‘Ekamra Kshetra’ heritage project for ‘all-round development and beautification’ of the periphery of Lingaraj Temple in Old Town area of Bhubaneswar. Recently, the Archeological Survey of India (ASI) objected to the work being done by the Bhubaneswar Municipal Corporation (BMC) and Odisha Bridge Construction Corporation (OBCC) without their permission.

The ASI Bhubaneswar circle has asked both the BMC and OBCC to seek approval from the Director General of ASI, New Delhi for the execution of any developmental work within the area of Ekamra Kshetra.

A letter sent by ASI to BMC stated that a total of 26 Centrally Protected Monuments (CPMs) are located within the area earmarked for the Ekamra Kshetra. The BMC and OBCC are carrying out peripheral developmental works in the prohibited and regulated area of these CPMs without obtaining prior permission of the competent authority, it further charged.

The BMC officials, however, claimed that they are only acquiring land and ‘clearing encroachments’! Moreover, they said they are yet to go through the ASI letter.

Last year, the Naveen Patanaik government had faced flak from several quarters for demolishing Mathas and other structures around the Sri Jagannath temple in Puri to improve infrastructure. The government claimed it was acting on the recommendation of Justice BP Das committee and also cited the threat of terrorism to explain its actions.

Several Hindu seers, who are in-charge of ancient Mathas in the temple town, wrote an open letter to the Supreme Court chief justice seeking a stay on the razing which they said was “unjustified destruction of heritage structures”.

The seers alleged that they were being forced by the district administration to consent to demolition of mathas set up by great acharyas like Ramanujacharya, Nimbark Acharya, Madhwa Acharya, Dasanami, Ramananda Acharya, Bishnu Swami and Ballabhacharya, which have both material and spiritual significance.

Jagannath Puri, one of the Chardham, has the unique distinction of having several mathas representing different religious denominations – each of them intimately connected with Sri Jagannath temple where they have specific rights and duties.

Activists fighting to free Hindu temples from state control have argued that the Odisha government has misused the Sri Jagannath Temple Administration (SJTA) Act to usurp property of mathas and demolish the same under guise of development. They have called the actions of Odisha government ‘a classic example of government’s interference destroying Hindu social institutions and support system….secular government machinery violating the sanctity of Hindu holy places.’

Heritage activists have also raised concerns over the Odisha government’s unilateral actions, and some have also questioned ASI’s expertise in preservation of old artefacts.