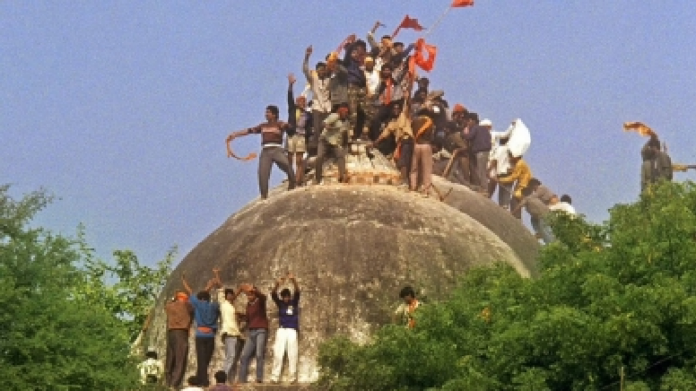 In his mid-forties in 1992, he was a well-known correspondent of one of the country’s leading national dailies.

In his heart, he was a devout Hindu having spent his early years in the RSS.

Recalling his experiences of the December 6, 1992, events, he says, “On December 3, I was asked by my editor to proceed to Ayodhya and report the event unfolding there. I reached Ayodhya the same day and stayed with one of the local journalists I knew. On the morning of December 4 and 5, both of us went to a ‘secret destination’ — a huge mud mound — where young ‘kar sevaks’ were practising rope climbing. When I asked them the purpose of their exercise, they simply smiled and looked away.”

The journalist, who spoke exclusively to IANS on condition of anonymity, says that during those two days, as people started coming into Ayodhya, he spent most of his time with the kar sevaks.

“Somewhere in my heart, I was upset over the killing of kar sevaks in police firing in 1990. As we shared our experiences, the young boys there became increasingly comfortable talking to me. I told them that though I was a journalist, I was also a Hindu — this struck a chord with them and we managed to establish a bond,” he recalls.

One of the kar sevaks, Rishi Agarwal, said, “We are now weary of what our leaders tell us. We cannot keep toeing their line all the time. We have decided what is to be done and it will be done.”

There was a sense of finality in his words.

Talking about December 6, the journalist who ‘had turned into a kar sevak by then’ says, “The morning air was filled with apprehension and the foggy skies revealed more than they hid. The vision was hazy but the intentions were clear. The police deployment was being moved and also slowly increased. Speeches on the stage had begun and top leaders were arriving one by one. As the sun rose higher, a group of kar sevaks suddenly appeared on the top of two of the three tombs of the mosque. There was total commotion and people surged towards the mosque and the demolition had begun even as leaders made apparently frantic appeals to stop.”

He says, “There was complete mayhem and for some strange reason, the officers and the police remained at the back. As the kar sevaks pulled down the mosque, some elements began attacking journalists who were covering the event. I quickly put my note book back in my pocket and shouted “Jai Shri Ram’ — this helped me escape the wrath of kar sevaks who believed that scribes were against the demolition.”

The septuagenarian further says, “Camouflaging as a kar sevak during the demolition was the only bit of kar seva that I did. I still do not know whether I was trying to save my life or it was the Hindu in me who had jumped forth.”

Over a dozen journalists and photographers had been severely attacked by the mob and some of them even had to be hospitalised.

He further says that returning from Ayodhya on that day was even more dangerous than being there.

On the Lucknow-Ayodhya Road, anti-social elements had taken over. They were burning tyres, vandalizing vehicles and attacking no one in particular.

“We were travelling back in groups and we decided to hide the fact that we were journalists. Each time we saw a mob, we shouted ‘Jai Shri Ram’ and finally got a safe passage to Lucknow. We saw the police looking helplessly at several places. Later, we learnt that since the then chief minister Kalyan Singh had been dismissed, there was actually no government left in the state to take a call on the violence,” he remembers.

Almost a decade and a half after his retirement from his job, he says, “The demolition was a fallout of patience being pushed too far. It was a case of leaders playing politics during the Ayodhya movement and the grassroots workers paying the price of it. They were fed up with all this and decided between themselves that they needed to act. It was certainly not a ‘sudden act of madness’ — as was said later — but a planned move. I still wonder why the top leaders did not see through it. Or did they?”

Sangh is neither right-wing nor left-wing, it is nationalist: RSS general secretary Dattatreya Hosabale