Nataraja: The embodiment of energy 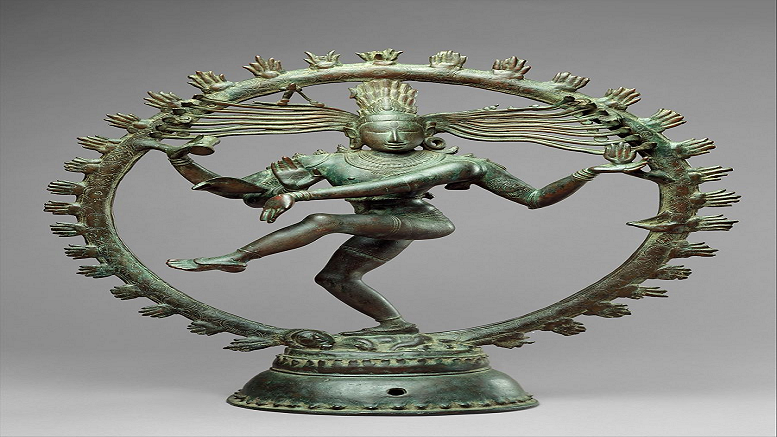 The dance of Shiva is no ordinary dance; it conveys to us the message of the universe. It speaks to us in innumerable ways, illustrating duality and non-duality, among other things. The dance and the dancer are one. They are inseparable. The creator and the creation are singular, connected by majestically powerful creativity. As a symbol, Shiva Nataraja is a brilliant invention. It combines in a single image the roles of Shiva ji as creator, preserver and destroyer of the universe and conveys the Bharatiya concept of the never ending cycle of time.

In his Nataraj avatar, a representation of the Hindu god as a divine dancer, Shiva is seen dancing in sheer abandon, his locks of hair swinging wildly and his limbs set in broad symmetry, standing beautifully balanced on his right leg, trampling a tiny figure. He represents the combined power of the dynamic universal energy and the awakened Brahman or Saguna Brahman.

He is the source of all life, activity (chetana) and vibration (spandana). The fiery circle or great halo surrounding the statue represents mass, energy, space and time. It is within this frame that the Nataraj dances. His long flowing hair touches the extreme ends of the universal circle. Nothing is beyond him.

In his right upper arm he holds the Damru, a small two-headed drum that calls the universe into creation. This one represents the male-female principle of life, the lower one shows the gesture of assertion, “Be without fear.” In his left arm he holds fire, a symbol of destruction. One moment he is creating the universe, the next moment he is extinguishing it.

By holding the reins, he calls the cosmos into being. His lower right hand is raised in the ‘abhaya mudra’, evoking in us a sense of protection and grace. Shiva’s lower left hand is fixed diagonally across his chest, while his palm faces downwards towards his raised left foot. It represents spiritual grace and the art of controlling our lower desires.

Beneath the foot of the mighty Shiva is the demonic dwarf, Apsmara, the embodiment of ignorance- The Ego. Standing on his back, Shiva teaches us to abandon the ego and to break it. His other foot, raised in graceful stillness against gravity, is a symbol of spiritual contemplation. Liberation will forever elude the one who does not seek to contemplate.

Since the manifestation, maintenance and dissolution of the entire universe is dynamic, it is depicted in Shiva’s dances. and he performs various kinds of “dances” for the suspension of the karmic cycle. Iconographically, he is depicted as performing different dances at different stages of the universe’s existence.

This is one of the twenty-five types of iconographic representations of Shiva. His dance itself is the personification of his eternal dynamism of the universe, and this dance or stage of the universe is divided into five categories:

The Nataraj is an all-encompassing circumference that perhaps speaks to us in the language of the cosmos.

Constituents of the State in Hindu Polity