Namaz of Bakrid performed in Badrinath, even as Char Dham Yatra remains banned! 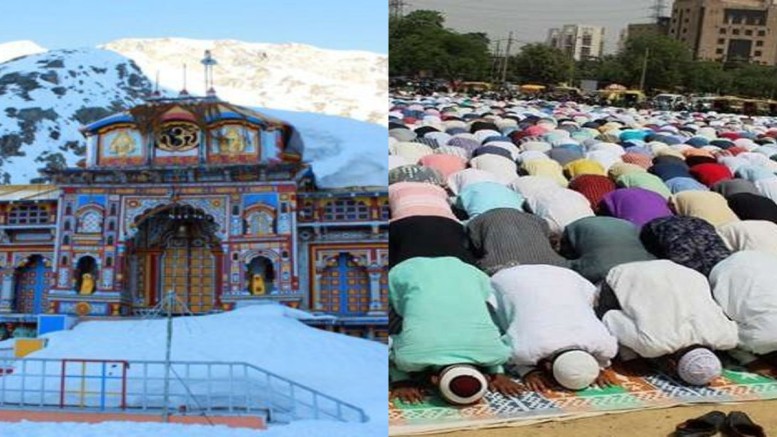 Perhaps for the first time in history, the Muslim festival of Eid ul Adha was celebrated in the Hindu holy town of Badrinath yesterday. In 2018, the central government had approved a project called “Astha Path” to face-lift the temple premises in Badrinath. The contractor who was appointed to construct a parking for this project employed 15 Muslims, who read the Namaz in the holy town.

After a protest by the locals, Chamoli police has clarified that the Namaz was read in a closed room without any Maulvi and without loudspeakers.

Later, a video message by the district police chief Yashvant Singh Chauhan claimed that the area was around 1 KM away from the temple. He also said that police has instituted a case under the DM Act and are investigating the matter.

Badrinath has seen many attempts by Muslims to capture it. For a long time people, including many priests of the temple, claimed that a Muslim postmaster of Nandaprayag named Fakhruddin Siddiqi had written the aarti sung in Badrinath temple. It was claimed that he was such a devotee that he came to be called Badruddin due to his devotion to Badrinath. However, the original manuscript of the aarti was found in 2018 and it was established that one Dhan Singh Barhwal had written this aarti. There also seems to be a reliable evidence that a Muslim man named Badruddin was a devotee of Badrinath.

Then a few years ago, a Maulana claimed that Badrinath Himself is Badruddin Shah and the temple is actually a mazar and should be “returned to Muslims”.

This was the next step in the escalation strategy, but that strategy failed. So, it seems that a strategy has been devised now.

The conflict escalation strategy of Muslim extremists is almost similar everywhere. They first make small innocent demands and make incremental demands to attain the objective, with no one the wiser until it is too late.  Take example of a humble mazaar. First step is to build a simple grave marker on a public place like road, railway station or in any property that is to be captured. Then, over the next few years, they make some small temporary additions. These could be a small fence, a canopy or something like that. Then, over next few years when it starts attracting sizable number of “devotees”, make some permanent additions. Within a generation, a large area can be easily occupied and is claimed as a “100s of years old mosque.” If a ground penetrating radar is deployed on such locations, a large number of such mazaars would be exposed as frauds with no body within.

Similarly, the possible escalation strategy in Badrinath is like this:

Indeed, in many hill villages of Uttarakhand, there has been unease about increasing number of non-locals coming and becoming permanent residents. In fact, among Himalayan states, Uttarakhand is the only one where there is no restriction on purchase of property by non-residents of the state. With the Muslim majority areas of western UP forming borders of Uttarakhand, it is a matter of time before we see a drastic increase in Muslim population in the state. Indeed, the results of 2021 census could be shocking.

Pooja in Badrinath not allowed to Hindus

All this has happened while even the locals are not allowed to perform pooja in Badrinath Dham. Char Dham Yatra has been stayed by the Uttarakhand High Court on the pretext of the pandemic, even though a scaled down version which allows only vaccinated people and has a limited number of yatris can be easily conducted.

Apart from that, the state controlled Devsthanam Board had changed the timing of the morning rituals from 4:15 AM in brahma muhurta to 7 AM citing the pandemic. Although, after a sustained outrage, the timings were changed back. Indeed, the constitution of the board itself is against Dharma and harmful to the interests of Hindus, as we wrote in an article last year.

Many may dismiss this as a small matter, but as the escalation strategy shows, the namaz in Badrinath town is just a small first step. The police shall no doubt treat it as a small law and order issue. On May 13, 2021 Chamoli Police handle on Twitter wished the people on Eid, in the morning around 10 AM. Curiously, the Muslim population in the whole district of Chamoli according to the Census 2011 is 1.12%. On the same day, Akshay Tritiya and Parshuram Jayanti were being celebrated by Hindus. However, the tweets for these came only after outrage on the internet from local Hindu voices. The Eid tweet was also deleted the same day.

The moral of the story is that Police is secular and will enforce the will of the secular state, even if it goes against Hindu sensibilities. This year, there was no animal slaughter on Bakrid in Badrinath, just the namaz. However, according to a recent judgement of Uttarakhand High Court, the ban on slaughterhouses in Haridwar is arbitrary as “Denying hygienic and fresh non-vegetarian food to people of Haridwar district across the limitations of religion and caste amounts to hostile discrimination” and minorities, meaning Muslims, have a right to eat meat within Haridwar.

Who is to say that in future similar decree will not be passed for Badrinath by our activist judges?