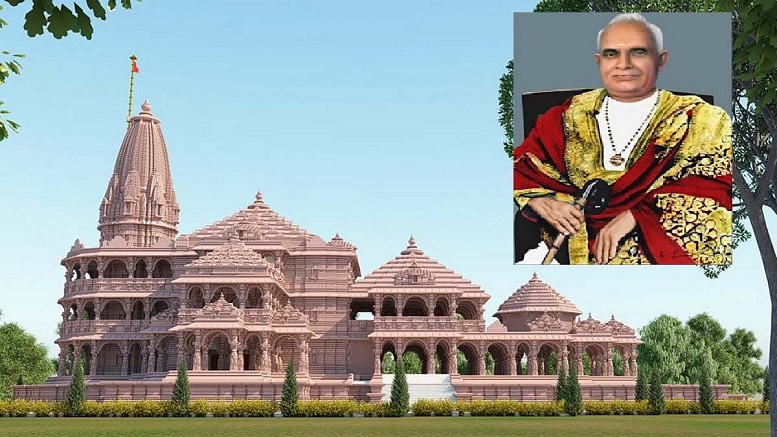 The Nair Service Society (NSS) has collected and handed over donations for the under-construction Ayodhya Ram Mandir. They have also made it clear that the money was as per the wishes of the devotees and not as per the demands of anyone. They also clarified that there is no need to politicize the donations. An amount of Rupees seven lakhs has been handed over.

A nationwide fund collection drive is currently underway for the Ram Mandir. It is in this context that the NSS had come up with the donations which were deposited into the SBI branch of the Ram Mandir Teertha Trust in Ayodhya.

This is what the NSS had to say in a letter written to the Temple Trust authorities while handing over the amount. “This humble contribution may kindly be considered as an expression of our deep faith in Lord Sree Ramachandra.” NSS also added that the donation was part of its attempts to protect and preserve the faith of the Hindu community.

This move comes at a crucial juncture in Kerala’s politics in the backdrop of the upcoming Assembly elections. The donation is seen by many, including the BJP, as a major step in gaining the hearts and minds of the Nair society.  The BJP is trying hard to gain a foothold in the state assembly and Nair votes account for around 15% of the state population.

Traditionally, the NSS as a whole has maintained equidistance from both the Congress and Communist parties and this move is considered by many as a mellowing up between the Nairs and BJP. Except for a few, most nationalist Nairs have frequently worked with the BJP in the past and they continue to do so.

This donation also comes in the backdrop of the NSS demanding the state government to withdraw cases against Sri Ayyappa devotees falsely implicated merely for taking part in peaceful Namajapa processions that took place in 2018 to protest the Supreme Court ruling that bulldozed the beliefs of all Hindus. The communist regime had not spared thousands including women and children, back then. Nairs too had participated in huge numbers and still suffer from court proceedings.

The educated and yet unemployed among them are not able to apply for jobs or go abroad due to pending legal formalities. By not withdrawing these flimsy charges, the government is showing an attitude bordering on revenge. It has to be remembered that the whole Hindu society was pushed into a corner when they revolted by chanting the Bhagwan’s name and hitting the streets in peaceful protest processions as part of the Sabarimala Temple agitations that shook the state.

Earlier this year G Sukumaran Nair, the NSS General Secretary had sent letters of gratitude to both Amit Shah and Narendra Modi thanking them for wishing the NSS on Mannam Jayanthi. Mannathu Padmanabhan is the founder of the NSS who worked hard for the upliftment of the Nair society and was awarded the Padma Bhushan for his contributions.

BJP leader K Surendran has a good rapport with NSS authorities and so do other BJP leaders. Other local BJP leaders like P R Shiva Shankar too have come out thanking the NSS and Sukumaran Nair for both its pro-Hindu stand on the Sabarimala Temple and this donation for the Ram Mandir. Many leaders of the NSS are also associated with the RSS.

Converting this mass support into votes should be the priority of the BJP right now.