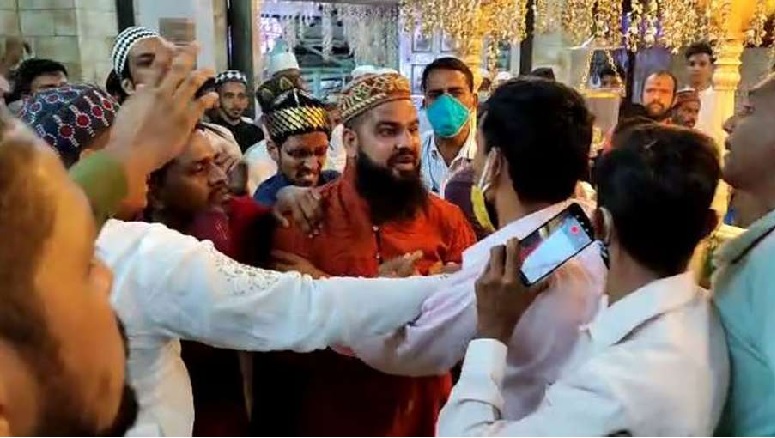 A mob of around 50-60 Muslims barged into a Hindu temple in Malanggad, Raigad district while arti (puja worship) was going on, and shouted ‘Allah-o-Akbar’ slogans. When questioned, they clashed with devotees and started pushing and shoving. Police stationed there was initially a mute spectator, but later when they tried to intervene some Muslim goons caught hold of their collar too.

As per reports, the temple is the samadhi sthal (resting place) of Baba Macchindarnath, the founder saint of the Nath sampraday. Every day a diya is lit and offering of curd-rice is made to Baba. Once a year a palkhi procession is taken out and a maha-arti is done on the occasion of Magh Purnima. This year, people took special permission to conduct this arti, in light of the Covid restrictions, to which some Muslims took objection. They claim that the samadhi is actually a dargah of some Sufi saint from Yemen who came in the 13th century.

The arti was being conducted on Saturday, 28 March around 8 PM when the disruption happened.

The temple premises have been split between both communities. The Muslims apparently objected to Hindus being allowed to gather in the temple despite Covid restrictions.  It is interesting to note that when Hindus have objection to a government decision or perceived injustice, they protest outside government offices, but the ‘minority’ Muslims decided to vent their angst against a government decision by barging into a Hindu temple and shouting religious slogans.

The fact that Hindus were conducting a special, once-a-year arti at the temple also seems to have been lost on the Muslim radicals. The Maharashtra police, in an exemplary display of ‘secularism’, has charged people on the Hindu side under the Covid Act and arrested only 4 Muslims, probably those who assaulted police.