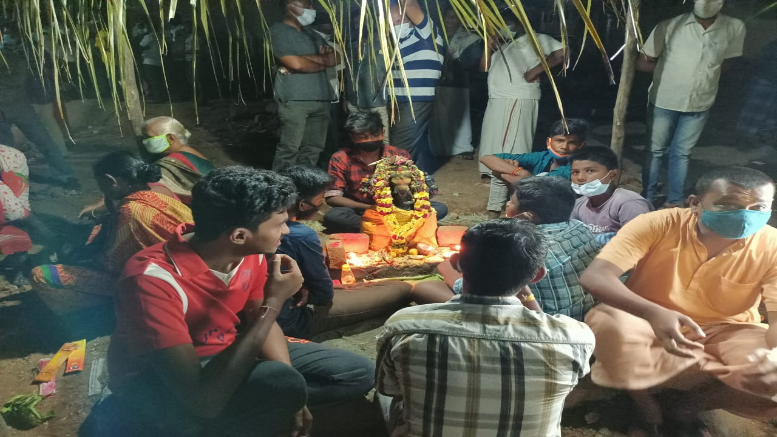 Despite Hindu organisations’ and BJP cadres’ protests a murti of Ganesha was removed from its spot following missionaries’ complaint. A tense situation prevailed in Tiruchengode, Tamil Nadu after BJP and Hindu Munnani cadres were detained by the police. Missionaries are said to have encroached on temple land and are now contesting the installation of Ganesha murti.

Similar to Tiruvannamalai, Tiruchengode hill in Namakkal district of TN is famous for circumambulation(GiriValam) on the days of Amavasya and Purnima. Tiruchengode hill houses an old temple of Ardhanareeswara . On the Girivalam route missionaries allegedly encroached on a spot and built a prayer house.

As per Hindu Munnani which has been fighting the issue for a long time, the Ganesha temple has been there for a longtime and is marked in the maps as well. The murti was placed a little away from the original spot as highway construction work was going on.  As per Hindu Munnani’s claims while the temple is marked in the maps, the church/prayer house cannot be seen in the same.

Missionaries had encroached on the plot and were preaching to the devotees who came for Girivalam. In 2014 itself HM had petitioned the Revenue Divisional Officer and police, seeking them to remove the encroachment. However it fell on deaf ears. They also sought answers under RTI in 2019, on whether permission was given to build a church in the area.

The Tiruchengode municipality office replied that they hadn’t granted permission to build any church in the area. However on August 3rd, missionaries filed a complaint with the police seeking to remove the Ganesha murti from the contested spot. Police immediately responded by trying to appease missionaries and after lathi charging the protesting Hindus, removed the murti from the spot at 2.30 in the night.

The New Indian Express reported that the prayer house had been functioning at the foothills for 25 years and was razed by the revenue department as a part of removing encroachments on the Girivalam path. The Ganesha murti was allegedly placed in the same spot . While Hindu Munani claims that the land belongs to the temple under HRCE control, police claim that it is poramboke(government) land.

Even if it is government land, authorities took their sweet time(25 years) to remove the encroached prayer hall. But the Ganesha murti was removed in a single day. 3 Hindus have been arrested for installing the murti without prior permission. Numerous Hindus who protested on the spot were injured as police lathi charged and threw chairs at them.

While Christians are offended by the fact that one single murti is placed near their church, they dared to build their church on a hill that Hindus consider sacred and equal to Ishwara himself. Citing this incident Congress leader and State Minority Commission(SMC) Chairperson Peter Alphonse has proposed that the DMK government should bring a law for communal harmony to keep ‘Tamils united’. There are reports that CM MK.Stalin has directed the law department to study the aspects of bringing such a law.

Recently a Catholic priest was appointed as a member of the minority commission while another priest George Ponnaiah abused Hindus and Bharat in the worst possible way. Few Christian priests have also been openly saying that it was only because of their campaign that DMK came to power. It was endorsed by a DMK minister as well. Another DMK minister’s daughter-in-law wanted to bring a law that prohibits arresting Christian priests without the permission of the Pope. Yet DMK shamelessly plays to their tune and crushes the beliefs of Tamil Hindus who voted them to power.