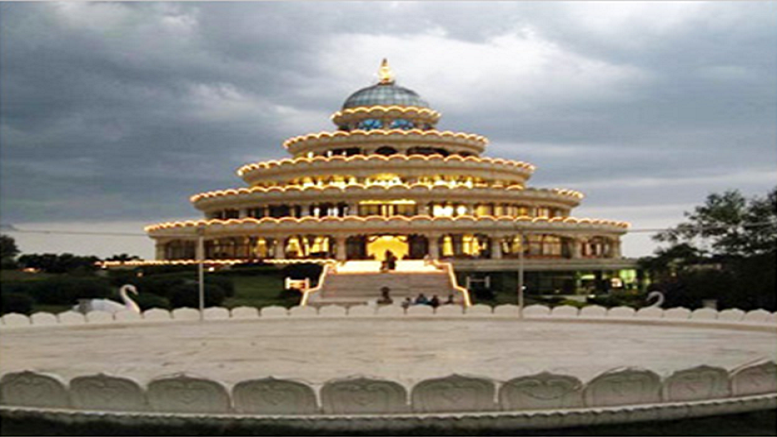 Mata Vishalakshi Mandir is a Hindu temple dedicated to Vishalakshi Devi, an aspect of Parvati meaning ‘The one with wide eyes’ in the state of Uttar Pradesh, Bharata. It is located at Mir Ghat on the banks of the pious and holy Ganga river. It is also one of the 51 Shakti Peethas or the abodes of Adi Parashakti that are worshipped by the Shaktas or followers of Shaktism where the kundalas or the earrings of Sati fell. Some versions say that one of her eyes fell here.

It is one of the triad of Shakti temples namely Madurai Meenakshi, Kanchi Kamakshi which is very sacred for people from Southern Bharata.

The presiding deity is Maa Vishalakshi, beautifully dressed in silken cloth with a lotus in her right hand and her left hand in Varada mudra.

The daughter of Prajapati Daksha, Sati was married to Bhagwan Shiva against his wishes. Daksha organized a great yajna, but did not invite Sati and Shiva. Uninvited, Sati reached the yajna-site, where Daksha ignored Sati and vilified Shiva. Unable to withstand this insult, Sati jumped into the sacrificial fire and committed suicide. Sati died, but her corpse did not burn.

Shiva (as Virabhadra) slew Daksha for being responsible for Sati’s death and forgave him, resurrecting him. The wild, grief-stricken Shiva wandered the universe with Sati’s corpse. Finally, Bhagwan Vishnu dismembered the body of Sati into 51 parts, each of which became a Shakti Pitha, temple to a form of the Goddess.

Shiva is also worshipped at each Shakti Pitha in the form of Bhairava, the male counterpart or guardian of the presiding goddess of the Pitha. Sati’s eye or earring is believed to have fallen at Varanasi, establishing Vishalakshi as a Shakti Pitha. However, if one asks at the temple there today, the priest and all others aver that the body part that fell was her face, which is hidden behind the murti. It is one of the sacred six points that symbolize Shastanga yoga.