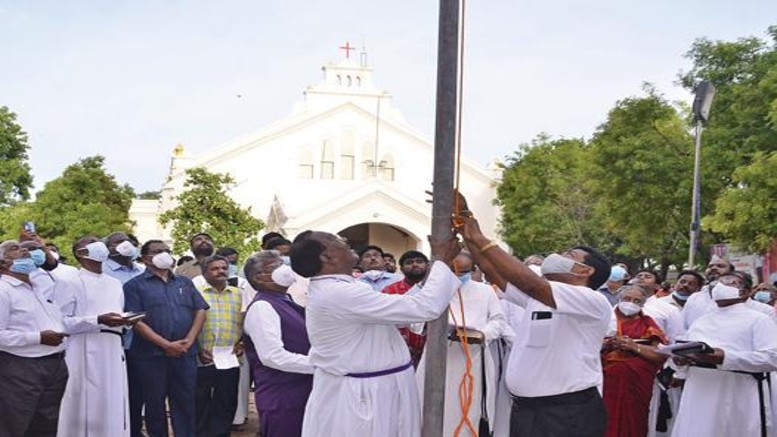 On June 14, the Church of South India’s (CSI) Tirunelveli diocese conducted a peculiar festival called Mambazha Sangam(Mango Sangam). If you think it’s something like Spain’s Tomatina festival, no, there were no mangoes involved in the festival. Even more peculiarly this is the only festival that the church celebrates based on Tamil Hindu calendar.

This Mango Sangam festival begins on the last Tuesday of Tamil Month Aani and continues till the next day. Why would the church celebrate a festival based on Hindu customs? What could be the reason? Similar to how Christianity appropriated pagan festivals like Christmas and Halloween, Mango festival is another such appropriation.

On the banks of the point of convergence of three tributaries of Thamirabarani, a temple for Muthumalai Amman is located. She is the Kula Devi of the Nadar community. For a Tamil Hindu Kula Devi/Deva and the yearly festival for the deity called Kodai is one of the most important religious practices. Wherever he is he will come home for the annual Kodai with his family to pay his tribute as part of the clan.

Even though Muthumalai Amman is the Kula Devi of Nadars, Hindus of all communities, even from neighbouring districts, come together to celebrate the 11 day Aani festival with pomp every year. The festival begins with hoisting of the flag and proceeds with Tirthavari, Utsavam, etc. Devotees flock to the temple everyday during the festival. But in the old days those who came from far arrived on the 10th day to see the procession of Amman in all her glory as the festival ended. Among those devotees Nadars were the majority.

Nadars constitute the majority among those who converted to Christianity in the initial days in South TN. Even though they were converted, mostly through coercive means, they didn’t give up the habit of going to the temple for the annual festival. This was a concern for the church. So they started celebrating their own festival on the same days when Muthumalai Amman would have the festival every year.

Christianity has appropriated many things from Santana dharma and other pagan religions. But copying a live and thriving custom to keep converts in their fold exposes the shallowness of Christian theology. It also shows how important festivals and customs are and the reason behind coordinated attacks on joyous affairs like Dahi handi in Gokulashtami, crackers in Diwali, colours in Holi, etc to uproot Sanatana Dharma.