A Mahakali murti in the 12th century Lakshmi Devi temple in Doddagaddavalli village, district Hassan, Karnataka, has been found broken. While some have alleged vandalism by unknown miscreants, another version is that the murti in this ASI-managed heritage temple may have got dislodged and fell down.

In videos and images shared by devotees, the Mahakali murti can be seen lying face down on the floor, its head dismembered.

The desecration of this priceless murti comes on the heels of a recent spate of temple vandalisms and murti desecrations in Andhra Pradesh. The relentless attacks on Hindu temples and sacred figures in Andhra were brusquely brushed aside and trivialised by Civil Supplies minister Kodali Nani who said, “it’s just an idol….government will compensate.” 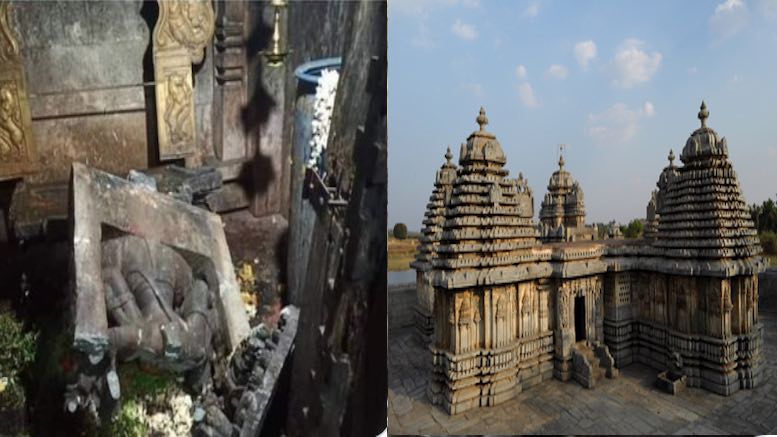 The ASI (Archaeological Survey of India) Bengaluru circle site has this to say about the beautiful Lakshmi Devi Temple, Doddagaddavalli –

“Doddagaddavalli was founded by Kullahana Rahuta, a merchant and his wife SahajADevi who got the temple of Mahalakshmi constructed in 1113 CE during the reign of Hoysala Vishnuvardhana (1106-1142 CE). It is the only example of the chatuskuta (four-shrined) order of temples built during the Hoysala period. On plan, the temple has four sanctums in the four directions,  each of which is connected by a sukanasi with the common navaranga.

Of the four shrines, the east has an image of Lakshmi, the west has a Siva-Linga, the north has an image of Kali and the south one is devoid of any image now. All the towers, except that on the Lakshmi shrine (east) are of simple stepped pyramidal variety of the Kadamba Nagara type. The tower over the Lakshmi shrine is dvitala vimana topped by square sikhara and stone finial. Interestingly, all the four towers accommodate the mahanasa projection crowned by the earliest examples of Hoysala royal emblem of Sala striking a tiger. The entire structure is enclosed by a stone wall having a dwara mandapa with a porch from the south.”

The destruction of a Mahakali murti in such an ancient heritage temple has once again raised questions over the ASI’s ability to effectively manage sacred Dharmic and other historical sites.