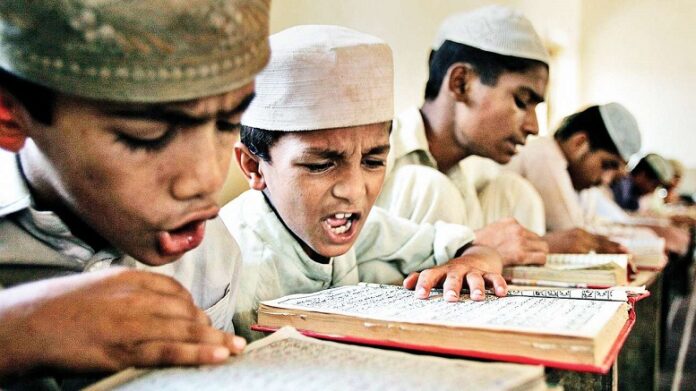 International understanding about madrasas is clear. Western experts assert that madrasas are created to propagate the radical Islamist ideology leading to recruitment of indoctrinated jihadi fighters. But despite more and more evidence of radicalization activities in the country’s madrasas emerging, Bharat continues to treat madrasas as mere educational units. Not all madrasas engage in extreme radicalization but they do have the potential to do so at any point in time. In any case, institutions that peddle extreme ideologies should have no place in a truly secular country.

The maximum number of ISIS recruits hail from Kerala, thanks to the madrasa activity in the state. This 2018 investigation found that “several madrasas in Kerala are teaching the theo-Fascist variety of Islam” and Wahabism, “a Saudi-sponsored creed of extremist Islam linked to global terror.”

Aided by hawala funding from petrodollar-rich Gulf countries, these seminaries were found to be indoctrinating young impressionable minds with what has been the wicked goal of ISIS to establish a global caliphate through a world-wide war…India Today’s investigation also found such madrasas were mostly funded by unknown donors in Gulf states.

Those operating the madrasas said the aim was to expose children “bit by bit” to the idea of a Caliphate. They also “acknowledged receiving financial support from the Arab world through underground hawala channels.”

Another state where radicalization is taking place is West Bengal. This 2019 report states:

Compared to their counterparts in Pakistan, Bangladesh and Afghanistan, Indian madrasas have been relatively benign in that they don’t teach violent jihad and their boys have not been directly involved in terrorism. But their radicalising influence is very real. By propagating a narrow and selective interpretation of Islam and its texts that portray women as inferior to men and non-Muslims as “kafirs”, they sow seeds of extremist thinking. They promote a harsh and intolerant version of Islam and insist that their understanding of the Quran and Sharia alone is authentic – and those who don’t accept it are not ‘true’ Muslims.

… A friend of mine who lives in Meerut decided to send her ten-year-old son to a madrasa during summer vacation to learn the Quran and “something about Islam”, told me she was shocked when after a few weeks the child started asking “strange questions” like why she didn’t wear burqa; and was it “haram” to watch movies and have photographs in the house? When she asked him who had told him these things he said his “maulvi saheb” at the madrasa had. “But I was really upset when one day he asked if our Hindu maid was a ‘kafir’. I told him to stop talking such nonsense and decided that he was not going back to the madrasa,” my friend told me.

Clearly, anti-Hindu hatred is an outcome of such indoctrination. Khan also speaks of funding from Saudi Arabia and Gulf countries:

But it isn’t just Saudi money that is propping up Wahhabism. Several other rich Arab countries are ploughing in “millions of petro-dollars” into madrasas to promote conservative Islam in the name of protecting and preserving Islamic culture, said Sultan Shahin, editor of the progressive New Age Islam website.

“Along with funds, the petro-dollar rich Arab countries also provide the core curriculum and textbooks for these madrasas. This teaching provides basic grounding in an extremist religious outlook that keeps children from interacting with other communities, even other Muslim sects…They are brainwashed in madrasas by semi-literate mullahs and then thrown out without any means or skills for survival,” he told the UN Human Rights Council in a submission.

But contrary to claims of these madrasas being relatively benign, retired IPS officer Ram Ohri writes about Deoband in a 2017 article:

The Prophet, moreover has said we are directed to make war upon men only until such time as they shall confess, ‘there is no God, but one God’.. More importantly, the teaching of this syllabus is not confined to the Deoband seminary. It has been prescribed for preaching jihad to young pupils in more than 5,000 madrasas affiliated to the Darul Uloom Deoband all over India.

According to a conservative estimate during the last two decades Saudi Arabia alone has rolled out nearly 90 billion dollars for propagation of Wahhabi Islam through establishment of thousands of mosques and madrasas. On a rough count more than 25 percent of the 90 billion petro-dollars are believed to have been pumped into India, Nepal and Bangladesh for establishing more madrasas. Additionally, huge sums were transferred from other Muslim nations, including Pakistan, to establish lakhs of madrasas in India and other countries of South Asia to step up the campaign of global jihad.

Madrasas as units of secular education?

Given this history of radicalization, it is surprising that successive governments continue to treat madrasas as units of secular education and engage in policies that promote them, leading to continued ghettoization of the Muslim community.

The extent of concessions made for madrasas is shocking. The educational policy requires that the country’s private and government schools be affiliated to either the Central Board of Education or state Boards. But under the ‘secular’ policy of the country, certain madrasas have a choice to choose the syllabus.

In some states of the Indian Union madrasas are affiliated with state-level madrasa boards and offer curriculums similar to state-run schools and colleges supplemented with Quran studies. Other madrasas are affiliated with prominent Islamic seminaries such as the Dar-ul-Uloom, Deoband (estb. 1886), Darul Uloom Nadwatul Ulama, Lucknow (1894) and Jamait-ul-Hidaya, Jaipur (1985).

The government already spends exclusively on the Muslim community through the Minority Affairs Ministry, but it is alarming that some of these funds are spent on madrasas are potential radicalizing units promoting anti-Hindu hatred. Instead of working to mainstream education, the state instead provides financial assistance! The HRD Ministry’s Department of School Education and Literacy implements the Scheme for Providing Education to Madrasas/Minorities (SPEMM) that includes the Scheme for Providing Quality Education in Madrasas (SPQEM) and Infrastructure Development of Minority Institutions (IDMI)

Under the IDMI scheme, financial assistance is provided to facilitate education of minorities by augmenting and strengthening school infrastructure in minority institutions…Further, under the Pradhan Mantri Jan Vikas Karyakram (PMJVK) of the Ministry of Minority Affairs, projects to the tune of Rs 26.93 crore have been sanctioned to various state governments, for madrasas in the last two years.

The scheme has been ongoing for over a decade, and so far, over 21,000 madrasas have benefited from financial assistance to the tune of ₹1,138 crore, according to the NIEPA study.  Despite such overtures to pamper the one biggest minority, politicians never seem content with the outreach being done. In March 2020, the Parliamentary Standing Committee on Human Resource Development questioned the centre on why allocated funds for madrasas were not all spent.

To answer this, the centre had to explain in terms of procedural delays caused by the funding change from a 100% central grant to 60:40 split between the centre and the states. The centre also promised as much as a 83% hike in budgetary allocation.

By 2023, the scheme will be providing assistance to 9,000 madrasas, paying salaries to 27,000 teachers in modern subjects. About 250-300 institutions will get infrastructure funding, the Centre told the panel…

One report points out that 18 states in the country receive central government funds for madrasas. These include Assam and UP. Assam had recently announced that it will convert 740 government funded madrasas to general schools but in a balancing act will also convert Sanskrit Tolls to study centres. But Assam’s then Deputy Speaker Aminul Haque Laskar was quick to assert that private madrasas would never be shut down. States like UP continue to spend on madrasas as this report shows, whether to reform madrasa education or for madrasa makeover.

With increasing reports of madrasas as units of radicalization, the government and agencies must provide a clear picture on the madrasa scenario in the country, but unfortunately, no clear information is available.

According to information provided by the Ministry of Minority Affairs, India has 24,010 madrasas, of which 4,878 were unrecognised, in 2018-19. Unofficially it is claimed that only one organisation, Jamiat Ulema-e-Hind has over 20,000 Deobandi madrasas in north India.

Another source estimates the number to be 30,000.

In contrast to the various  figures cited above, the 2017 article by former IPS officer Ram Ohri has estimated the number of madrasas in the country at half a million!

Eleven years ago, in a refreshing essay titled, ‘Madrasas and The Making of Muslim Identity’, published in a book, Redefining Urdu Politics in India, (Oxford University Press, New Delhi 2006) a well-known Muslim scholar, Dr. Arjumand Ara had pointed out that “within India, according to government statistics, half a million madrasas are active in which about fifty million students (out of the estimated 15 crore Muslim population at that time) are enrolled. Part time and evening madrasas are not included in this list.”

This is in stark contrast to the low figures provided by various other sources. The question remains, do some of the statistics omit unregistered and private madrasas? Such alarming discrepancies in the statistics on madrasas highlight the need for a systematic survey that the government/its agencies need to carry out to create a realistic database of the prevailing numbers. Like NRC, such an exercise should be given a priority.

As discussed, some madrasas have played a major role in radicalization. We also read daily reports of Hindus facing hate crimes like temple desecration, lynching, rape, intimidation, and exodus of Hindus from Muslim majority pockets as in Kairana and elsewhere. In such a scenario, entities that polarize and radicalize must not be allowed.

The ideal solution would be to entirely mainstream education and do away with ghettoization through madrasas. In any case, units spreading extremist ideologies have no place in a supposedly secular and post-religion-based partitioned country.

But to begin with, there needs to be transparency and clarity on the number of madrasas. A comprehensive database of existing madrasas needs to be compiled on priority as the issue is linked to domestic and national security. The least the authorities can do in the interest of preserving the social fabric is to ensure that only registered madrasas continue and that these adhere to the norms laid down for functioning.