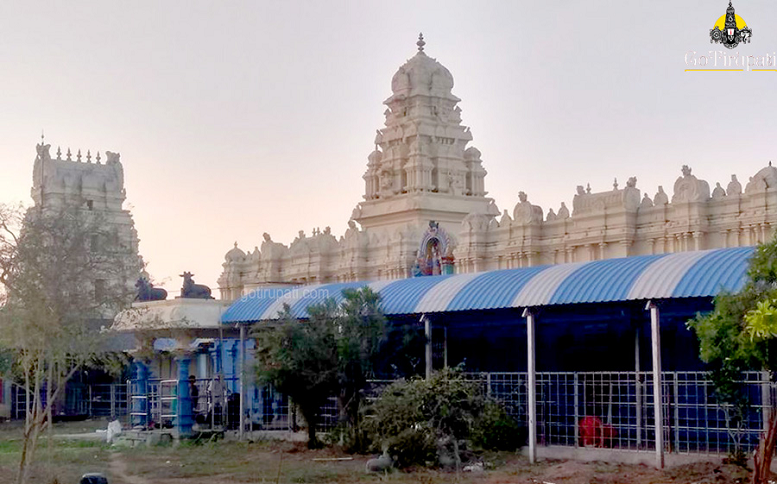 Dharmapuri is a town in the Jagityal district of Telangana. This place earns spiritual importance because of the presence of the shrine, which is dedicated to Bhagwan Lakshmi Narasimha Swamy, an incarnation of Bhagwan Vishnu. The temple is situated on the southern bank of the sacred river Godavari.

The temple town is sanctified by the Saikatha linga (Sand Linga) said to have been installed by Sri Rama during his journey to Dandakaranya and thus came to be known as Dakshina Kasi. This temple is called as Hari-Hara Kshetram due to the presence of both Vishnu and Shiva.

References have been made of this historical city in epics and many a literary works it was mentioned as ‘Dharmapura’ in Skandha Purana and Brahmanda Purana. Dharmapuri finds mention during Buddhist period as Dharmaram in Dekkala Banda inscription of the Rashtrakutas. Its name is also found in the writings of Ekamranatha of Kakatiya period. Kakatiyas were powerful rulers of large parts of Deccan for almost 400 years (950 CE- 1323 CE).

Historical evidences show that this place was under the rule of Hindu Kings, such as Badami Chalukyas, Rashtrakutas and the recharla velmas. Dharmapuri also flourished under Jainism and Buddhism. The elegant handy work of the sculptures is visible in the idol of this temple. Sculptures belonging to the Chalukya period are found in the Ramalingeshwara Swamy Temple and inscriptions describing the stories of Mahabharatha and Ramayana are found in the Main Temple.

From the inscriptions, it is known that this temple was built in 1018 AD. This temple was demolished in 1422 – 1436 AD by the Muslim rulers. It was rebuilt in the 17th Century and the temple is able to preserve its past glory despite the onslaught by Muslim dynasties under Aurangazeb period.

The temple has shrines for Yoga Narasimha Swamy along with Devi Lakshmi, Ugra Narasimha Swamy and Bhagwan Balaji. There is a small temple of Sri Venugopal as well with Rukmini and Satyabhama. This temple is also one of the rarest temples having six feet murti of Brahma with four faces which is worshipped by the devotees. The temple also has eight murtis of Bhagwan Hanuman.

People offer prayers to the idol of Yama, the Devta of Dharma, at the entrance of the temple and to Bhagwan Hanuman who is the Kshetra palaka while entering into the temple premises.

The Temple will be heavily crowded on Narasimha Jayanthi, Mukkoti Ekadasi (Vaikunta Ekadasi) and Karthika Pournami days. Annual Brahmotsavam is performed for 13 days, which starts on Phalguna Suddha Ekadasi.

Nine days festival is celebrated during Narasimha Jayanthi which comes in the month of Vaisakha. Dharmapuri is also known for the presence of one of the largest existing settlement of Vedic scholars in Telangana and South Bharat.

How to reach Dharmapuri?

Dharmapuri is situated at a distance of about 28–30 km from Jagityal town and 42 km from Mancherial railway station of the South Central Railway. Karimnagar is located at around 66 kms from Dharmapuri town. From Hyderabad to Dharmapuri the distance is around 230 kms.