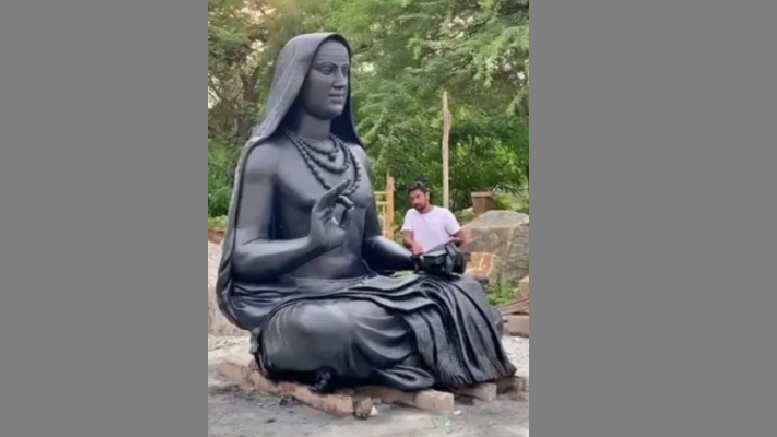 The people of Karnataka are feeling proud as the statue of Adi Shankaracharya (Hindu philosopher who revived Hinduism in Bharat) was unveiled in Kedarnath in Uttarakhand on Friday, said the sculptor, who carved the statue here in nine months.

The 12-feet Shankaracharya statue was sculpted out of a single piece of rock by local sculptor Arun Yogiraj and his team.

Yogiraj is elated as the Uttarahand’s Chief Minister and Tourism Minister congratulated him for giving the final shape to the beautiful statue in a short period of time. He had also got appreciation from the office of the Prime Minister.

The statue was sculpted in nine months. Seven sculptors worked for more than 12 hours in two shifts under the guidance of Yogiraj. Stone weighing 80 tonnes was carved into an statue weighing 26 to 28 tonnes.

Yogiraj said the statue represents 33-year old Adiguru Shankaracharya. “We have kept in mind that the face of statue should have a cherishing look, it should have a realistic appearance and it should also look beautiful from all 360 degree angles. Have read Shankaracharya’s life history as preparations,” he explained.

“I represent the fifth generation of sculptors in my family. My name was referred by Hampi Kannada University to the Prime Minister’s Office in August 2020 for making of statue. The PMO office had asked to make 25 inches of statue from sculptors across the country. My model was finalised in September 2020,” he stated.

After getting the assignment to make a 12-feet tall statue, a meeting was held with the Indian Air Force regarding the statue’s weight and other matters as they had to airlift the statue to Kedarnath. The work was finished by June 2021. The statue was sent to Chamoli airbase by road. From there, it was airlifted to Kedarnath in a special helicopter, he said.

“I reached Kedarnath and installation was done between September 25 and October 25. This is my honour. It was a big responsibility as lakhs of devotees turn out at Kedarnath pilgrimage centre,” he expressed his happiness.

At the time of making and when the statue was given the final shape, a large number of people thronged to see the statue in making. “This is a matter of pride that an statue made in Karnataka is going to be installed at pilgrimage centre of Kedarnath. It’s an honour for all sculptors in the state,” he says.

Recently, granite stones from Chikkaballapur town in Karnataka were sent to Ayodhya for building the Ram temple.