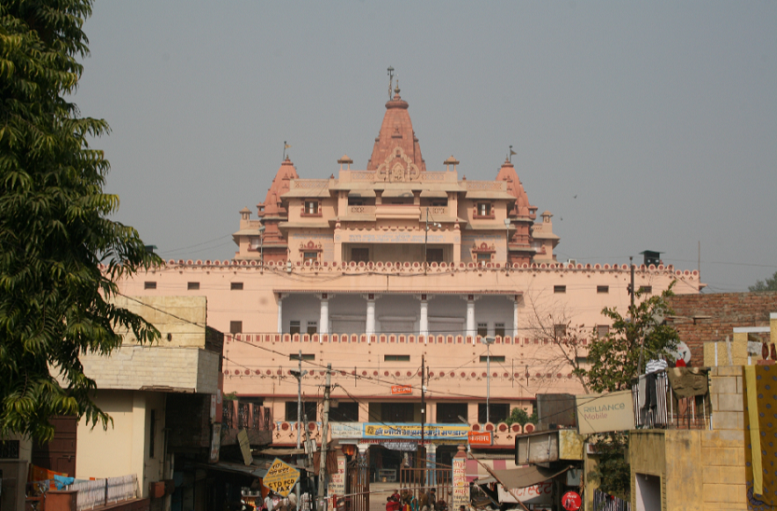 The Krishna Janmasthan,also called Thiruvadamadurai, is a complex of Hindu temples located in the holy town of Mathura in the Bharatiya state of Uttar Pradesh. It is one of the most revered temples,having significance since the 6th century BC.

It is one of the 108 Divya Desams, along with Thiruvayothi (Ram Janmabhoomi), Thiruvaipadi (Gokula) and Naimisharanya.

The presiding deity is Keshava Katra Deva/ Vasudeva Krishna/ Govardhanagiridhari Perumal with Maa Satyabhama, one of the Ashtabharya or 8 queens.

It is here that Svayam Bhagavan Vishnu took his birth as Krishna during the Dwapara Yuga in the prison cell in which his parents Vasudeva and Devaki were confined by the evil king Kamsa who greatly feared the prophecy that he would be killed by the eighth son of Devaki. Kamsa had already killed 6 of their previous children except for Balarama, who was transplanted into Rohini’s womb by Yogamaya.

At the time of his birth,it was the month of Shravana in the Hindu calendar when it rained heavily. He had unique features at birth, including four hands with the shankha, chakra, gada and padma and a complexion as dark as a rain-filled cloud, hence the name Neelamegha Shyama. His feet bore holy symbols. Devaki and Vasudeva were stunned and delighted at the sight.

Vishnu then revealed himself, saying that he would free them from their suffering. He asked Vasudeva to carry him in a basket all the way to Gokula and bring the daughter of Yashoda here.

Earlier, the brother of Sri Rama, Shatrughna had ruled this place after killing the rakshasa Lavanasura in Treta Yuga.

The actual temple, built around the prison cell where Krishna was born, was destroyed in 1670 by the Hindumisic tyrant Aurangzeb who built the Shahi Idgah Mosque. There is a shrine near it dedicated to eight-handed Devi Yogmaya. It is located against the rear wall of the Shahi Eidgah.

The Keshavadeva Temple was built by Ramkrishna Dalmia in memory of his mother Jathia Devi Dalmia. The construction of the temple started on 29 June 1957 and inaugurated on 6 September 1958 by Hanuman Prasad Poddar. It is located south of the Shahi Eidgah. The presiding deity Govardhanagiridhari Perumal faces east with Maa Satyabhama by his side.

The construction of the temple dedicated to Srimad Bhagavata was started on 11 February 1965 and the installation ceremony of the deities was held on 12 February 1982. It includes five shrines.The ceiling, walls and pillars of the assembly hall are adorned with frescoes depicting life events of Krishna and his associates and devotees. The text of Bhagavad Gita engraved on copper-plates adorn the walls of the parikrama (circumambulation) of the main temple.There are statues of Malaviya and Birla in the complex.

There is a large and deep stepped water tank, Potra Kund or Pavitra Kund, in south-east of the Janmasthan temple which is said to have been used for the first bath of child Krishna after his birth. The steps of the tank were built by Mahadji Scindia in 1782. They were restored by his descendants in 1850.

This place has been glorified in the Nalayira Divya Prabhanda in 50 verses by Nammalvar, Andal, Thirumangai, Periyalvar, Tondaradippodiyalvar, thereby making it the most venerated Divyadesam of all.