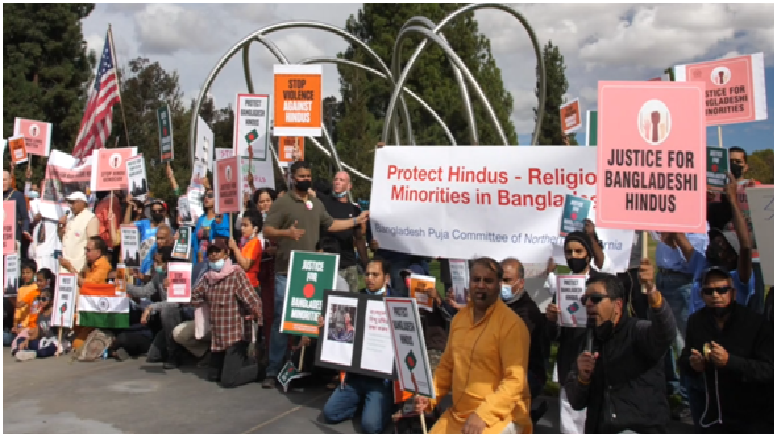 About 300 Hindus and other faith leadersgathered in Fremont, California for justice for Bangladeshi Hindus on October 23, 2021.

As per a report, from October 13, 2021 until now, 1500 homes of Hindus have been burnt with arson and 315 Hindu temples have been vandalized and destroyed. That included ISKCON temples where deities were smashed and Swami Prabhupada’s murti was burned.

More than 10 Hindus were brutally murdered, and 23 Hindu women and girls raped. In addition, hundreds of Hindu businesses, and shops arsoned and ransacked.

During the Durga Puja annual festival, the biggest religious gathering for Bengali Hindus, a video got viral showing the Koran on the lap of a Hindu deity Hanuman ji. That angered Muslims of Bangladesh and they considered it as an act of “blasphemy.” This triggered mass violence. Later, a Muslim man named Iqbal Hossain was identified by police for this mischief.

In 1947, Bangladesh Hindu population was about 24%, now it has reduced to about 8% today. Efforts leading to extinction of Hindus in Bangladesh is a concern for all Hindus around the world.

“The Hindu community is shocked and saddened by the recent series of violent attacks upon the Hindu minority in Bangladesh, including our own ISKCON temples and members,” said AnuttamaDasa, Minister of Communications for ISKCON. “We call upon the Bangladesh government to take swift action to bring an end to the violence against minorities and to take tangible steps to ensure the long-term safety and well-being of all Bangladeshi citizens.”

Protests are planned in 153 countries and in many cities in the USA.

Hindus, young and old, expressed concerns at the Fremont gathering. Priya Kishori, a Youth Community leader said, “It is very hard to believe that something like in Bangladesh could ever happen here in the United States because we have freedom to speak. We request that every youth gets the protection that they need. We are in solidarity with Bangladeshi youths.”

Kawser Jamal, VP of local chapter of the Bangladesh Awami league said, “There is no Muslim or Hindu, we are all Bangladeshi. We want justice and rehabilitation of people who suffered. In the last 12 years, the government has done a lot and we are working with the government to make more changes.”

Joshua Seymour, a local from Silicon Valley, came to support oppressed Bangladeshi and requested to contact local representatives about the issue. He added, “There is oppression and religious persecution going on in Bangladesh. Women being raped, children are scared and men murdered. This is not okay.”

Dhaval Shah, a Jain, said what ever happened is not right and should be fixed.

NirupamaChebiyam raised concern with conversion of Hindus. She added, “The brutality and kind of atrocities done to Hindus is beyond our belief. We Hindus believe in peace and non-violence.”

Balimardana Das, Board of Director of ISKCON Silicon Valley, said, “We want justice from the Bangladesh government to defend the judicial position of minorities in Bangladesh.”

Protestors are expecting and anticipating local governments and faith leaders in the Bay area to make official statements condemning the brutality in support of suffering Christian, Hindu, Sikh and other minorities in Bangladesh.

–By Dilip Amin, Ph. D.(Dr. Dilip Amin is a Director of the Peninsula Multifaith Coalition of the San Francisco Bay area, a certified speaker at Islamic Networks Group, and a Dharma Ambassador of Hindu American Foundation. He founded the web forum InterfaithShaadi.org and published the book–Interfaith Marriage: Share & Respect with Equality. He is also the founder of HinduSpeakers.org.)