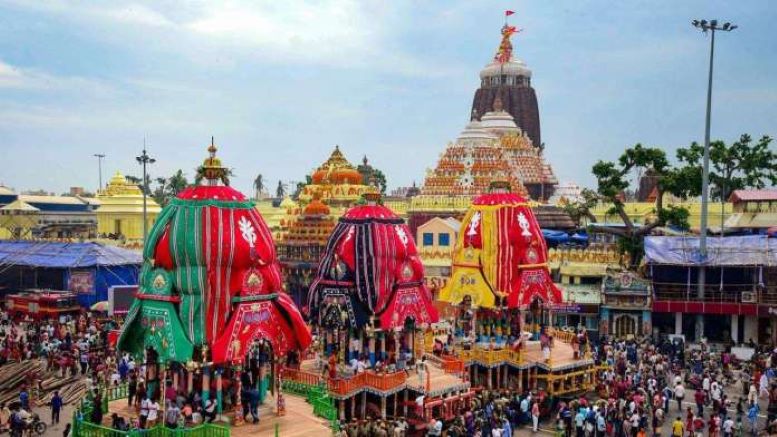 Earlier there were reports quoting the BJD-led Odisha government’s law minister Pratap Jena stating that the process to sell 35,272 acres of Shri Jagannath Mandir land in Odisha and six other has been initiated by the state. He was replying to a question raised by BJP MLA Mohan Charan Majhi. He is believed to have informed the assembly that the decision around 35,000 acres of temple properties was taken on the basis of recommendation made by a committee under the chairmanship of then governor BD Sharma.

OpIndia quotes Jena as informing the house “the government has already sold out 315.337 acres of temple land that included the Bharati Matha building in Cuttack. Rs.11.20 crore was earned from selling the said land that has been deposited in the corpus fund of the temple. The government has identified 395.252 acres of land in six states, including West Bengal (322.930 acres), Maharashtra (28.218 acres), Madhya Pradesh (25.110 acres), Andhra Pradesh (17.020 acres), Chhattisgarh (1.700 acres) and Bihar (0.274 acres).”

Furthermore, the Odisha government is also planning to sell temple land to those who have encroached the same and have been residing on such land for a period in excess of 30 years. Accordingly, they can buy the land at a rate of INR 6 lakhs per acre. Those illegal occupants who have been staying on the land for more than 20 years but less than 30 years would have to pay INR 9 lakhs per acre. Encroachers having occupied the land for less than 20 years and more than 12 years will be granted possession of the land on payment of INR 15 lakhs per acre.

However, temple administration has refuted the reports of sale of land as false and motivated while adding “The lands, which are occupied or are under the possession of various persons since long but belongs to Shree Jagannatha Mahaprabhu; are being settled by Temple Committee as per the “Unified Policy”, framed for the purpose in the year 2003.”

The temple administration has also pointed out at such ‘settlements’ made in the past in their tweet:

Implying that the decision of settlement of temple lands is not that of the state government alone and that the temple committee has also been involved in the decision-making process, SJTP (Shree Jagannath Temple Office, Puri) said in one of their tweets:

Decisions regarding the allotment of land for such public benefit infrastructure projects to the Government and others is taken by the Jagannath Temple Committee.

The clarification comes at a time when social media is abuzz with devotees objecting to such moves that amount to undue government interference in Hindu temple affairs. Even so, the clarification does raise few important questions which temple authorities are bound to clarify in the interest of transparency.

They must come forward and clarify to the public at large whether temple lands are being sold to Hindus alone and also if the rates specified are the current market rates for the said land. Also, how and why were the encroachments allowed to go on for such a long time without any action on the part of the authorities. Furthermore, the authorities must highlight the measures being taken to prevent such encroachments from happening in the future.

Readers may recall that even in 2017 reports of sale of 395 acres of Shri Jagannath temple lands outside the state had emerged. The report further said that the properties of the temple were subjected to serious encroachment. So, the welfare schemes of the temple have been converted as paid schemes just because the government machinery currently controlling the temple is incapable of proper maintenance of the lands owned by the temple. This raises the moral question of, “if the government comes into the temples citing mismanagement in administration shouldn’t it also move it if its incompetent to handle it?“

Even if temple authorities have clarified stating that the state government hasn’t taking the decision unilaterally, there are reasons to be skeptical regarding the same. Earlier the BJD-led Odisha government had demolished Gopal Tirtha Matha at Bhubaneshwar as part of a ‘beautification’ drive in the vicinity of the Lingaraj temple.

At that time too the decision had been made unilaterally by the Navin Patnaik government without taking the Hindu seers into confidence. Several Hindu seers, who are in-charge of ancient Mathas in the temple town, then wrote an open letter to the Supreme Court chief justice seeking a stay on the razing which they said was “unjustified destruction of heritage structures”.

While on the one hand government treats Hindu temple lands as its personal fiefdom, on the other laws are passed to save missionary properties. Hindus have been suffering from apathy of secular governments and laws for a long time now and this case is yet another reminder of the injustice being meted out to Hindus.