“Islam is religion of peace. Behead those who question our Prophet” – Muslim mob rallies in Jammu 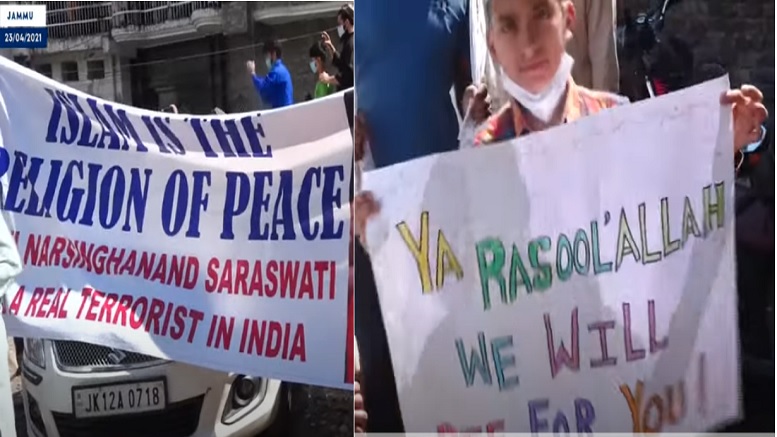 A rally was taken out by Muslims in Jammu on Friday from Jama Masjid area demanding the beheading of Swami Yati Narsinghanand Saraswati ji, who is alleged to have made remarks against the Prophet of Islam, Mohammad.

Posters saying, “Islam is a religion of peace” and chants of “Gustakh-e-Raool ki ek hi sazaa, sar tan se juda..sar tan se juda” (there is only one punishment for those who don’t respect the Prophet – beheading, beheading) were seen and heard at the rally.

Children carrying hand-drawn posters ‘O Prophet, we will die for you’ were also seen at the rally. A saffron-clad effigy representing Swami ji was beaten with shoes.

One of the organisers of the rally, Mohammed Akram said, “Mohammed is the prophet of the whole world, of Muslims, Hindus, Christians and Jews….we demand that the government arrest Swami Narsinghanand and give him the death penalty. Others who have taken refuge with him, and are raising their voices for him should also be acted against by the government.”

Lakhs of Muslims across the country have gathered in recent days to protest on this issue, chanting for beheading of Swami Narsinghanand as per Islamic Sharia law, and calling him a ‘Bhagwa Terrorist’. Taking place at a time when the Covid pandemic 2nd wave is raging across the country leading to even Kumbh Mela and election rallies being cut short, these gatherings have seen even small children in attendance.

Delhi AAP MLA Amanatullah Khan has said “This hateful insect (Swami Yati Narsinghanand) should be awarded the most severe punishment by slitting his tongue and neck.” Amanatullah Khan is a serial offender who made incendiary speeches during the anti-CAA agitation and has been a staunch defender of AAP corporator Tahir Hussain who is currently in jail for his role in last year’s anti-Hindu Delhi riots. The usual monetary rewards have also been announced for anyone who can behead Swami Yati Narsinghanand.

It is worrying for law-abiding citizens to note that such rallies are being allowed when the country has already witnessed violence during similar protests last year in Bengaluru over a FB post attributed to a Dalit Congress MLA’s nephew, in 2015-16 protests against Kamlesh Tiwari who was eventually brutally murdered in 2019 – 4 years after his alleged ‘blasphemy’ against Mohammed, and in several other such cases.

Should Hindus take a leaf from the Islamist play-book?

Islamists know that by spilling out onto the streets in such large numbers, they are successful in putting pressure on our secular state and law enforcement. Once a target is painted on someone’s back by their clerics, Muslim society by & large considers that person as ‘wajib-ul-qatl‘ (worthy of being murdered). In P Naveen’s case, there were indications that his FB account was hacked into and he was targeted to take revenge for publicly celebrating the Ram Janmabhoomi bhoomi puja.

By mounting such pressure and issuing threats of violence, Islamists easily bully the Indian state. Whereas Hindus prefer to take the legal route when their Gods and Goddesses are routinely abused, mocked and disparaged by Islamists and other anti-Hindu elements. A case in point is stand-up comic Munawar Faruqui who roamed free despite videos of his sacrilegious ‘comedy’, where he disparages Sri Rama and Maa Sita and makes other hurtful comments against Hindu victims of the Godhra train burning, circulating for many months and FIRs being lodged against him.

When Faruqui was finally arrested after yet another such stand-up act in MP, the entire left-liberal ecosystem went into overdrive to defend him, and he managed to come out of jail after just a month. An SC bench led by Justice Rohinton Nariman gave him interim bail accusing MP Police of ‘flouting procedure’ during the arrest.

None of these people have suffered any serious penalty. Some might have been arrested but would have soon been released on bail or cases against them dismissed, once public attention shifted elsewhere. On the other hand, multiple groups in Muslim society are working in tandem to identify, target and ultimately eliminate so-called blasphemers. For eg., an organization called Tahreek Farogh-e-Islam led by a Sufi cleric is maintaining a list of ‘those who disrespect the Prophet’ which includes names like Col. RSN Singh (ex-RAW) and others. Their message is simple, “We want all such people (alleged blasphemers against Islam) behind bars. Either they go behind bars or we will not remain (i.e. we will rise up in revolt, ready to be killed), our lives can be sacrificed to protect the honor of our prophet.”

There are hundreds of such Islamist groups spread all over the country, dedicated to spreading fundamentalist Islam, hate or contempt for ‘idol-worshipping’ kafirs being a by-product of their teaching. They incite ordinary Muslims to never forget and to lay down their lives for the ‘honor of Islam and its prophet’. These groups draw their inspiration from the same seminaries like Deoband and ideologues like Jamaat-e-Islami founder Maududi that inspire Islamist groups like TLP in Pakistan or Hefazat-e-Islam in Bangladesh.

Their unwritten contract with the secular Indian state is based on the implied threat of violence. And our governments, courts and police all know this, and thus will go to any length to avoid confrontation. That is called real power, and it is time Hindus learnt from this playbook on how to protect their interests.